Hailing from across the pond, Sarah Barrington’s (MIMS ’23) life has been anything but boring.

Born and raised in the middle of England where industry was booming, she grew up wanting to understand how things worked. This desire eventually manifested itself into an undergraduate degree and master's degree at the University of Cambridge, where she specialized in manufacturing and systems engineering.

Post-graduation, Sarah joined the team at McLaren’s Modelling and Decision Sciences division hoping to be on the cutting edge of innovation. There, she worked on a project that utilized a driver fingerprint algorithm that looked at time series data to understand quantitative differences in driving styles. “You can see where my engineering started to blend into data,” Sarah explained.

Eventually, she decided she wanted to approach bigger, broader problems with the advanced analytics skills she had accumulated during her time in the automobile industry. She spent the next few years starting a couple of companies before joining the I School to pursue machine learning research as the 2021-22 Fulbright Postgraduate Scholar in Data & Analytics.

“My research is meant to simplify and demystify [NFT] technologies to the public…and more education is needed to de-risk.”
— Sarah Barrington

One specific class last semester would prompt her to delve into her interests in future technology while pulling from prior knowledge: INFO 202 with Professor Marti Hearst. While brainstorming about information organization systems for the final project, Sarah found herself stuck on NFTs, a concept she had encountered when she worked with blockchain data years ago. NFTs, also known as non-fungible tokens, are combinations of digital artwork (an asset) with a blockchain-based contract saying who currently owns it and who used to own it. These tokens are believed to replicate the physical attributes that an artwork has — physical scarcity and physical ownership — that make it valuable.

“I knew that the space needed simplifying for people and that there were implementation flaws,” Sarah said, “as well as gaps in research in quantifying the scale of the problems with NFTs. They promise permanence and scarcity, but they’re not when you dig into it.”

This understanding became the backbone of her research, which found that currently, there are insufficient criteria to validate an NFT’s value. She and I School alumnus Nick Merrill (Ph.D. ’18) tested six months of NFTs on the Ethereum blockchain and discovered that 45% of these tokens did not meet the three properties expected of them: permanence, immutability, and uniqueness.

The pair then decided to publish their results on arXiv, an open-access archive of scholarly articles, and send their results to the upcoming Stanford Trust & Safety Conference, where it was accepted. Sarah noted, “We were one of the only presentations about NFTs, but I had some interesting conversations about the value of NFTs functionally since lots of high-profile people had put their names against it. John Lennon’s son sold the first notes of ‘Hey Jude’ as an NFT and even Madonna has one!”

As for the future of their research, Sarah emphasized the importance of education before purchasing. “My research is meant to simplify and demystify these technologies to the public…and more education is needed to de-risk,” she explained, “We are looking to submit proposals to marketplaces to talk about technology and understand opportunities to educate people who might be interested in buying NFTs.”

But until their research makes it onto these marketplaces, the pair recommends checking NFTs with a web application they built that puts their research into practice.

As for Sarah, she’s excited to continue working with Professor Hany Farid on researching deepfakes and online harms, and intends to continue expanding her horizons into uncharted territory both on and offline.

Coye Cheshire On NFTs and Human Connect to “Original” Art 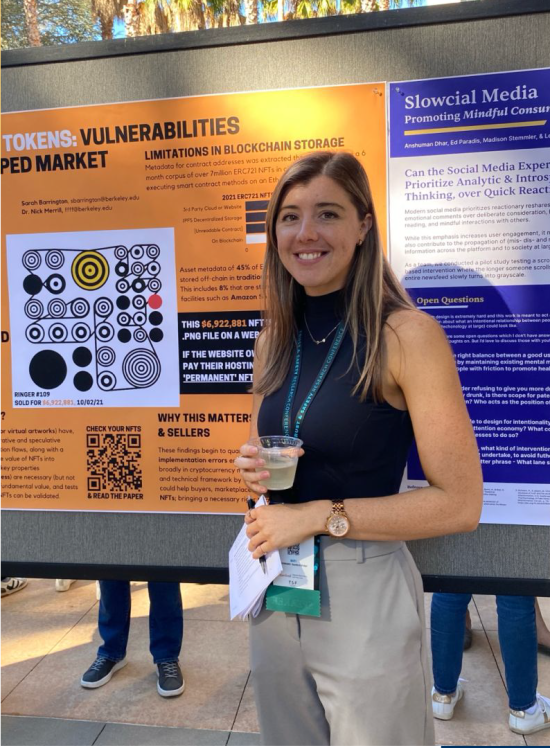 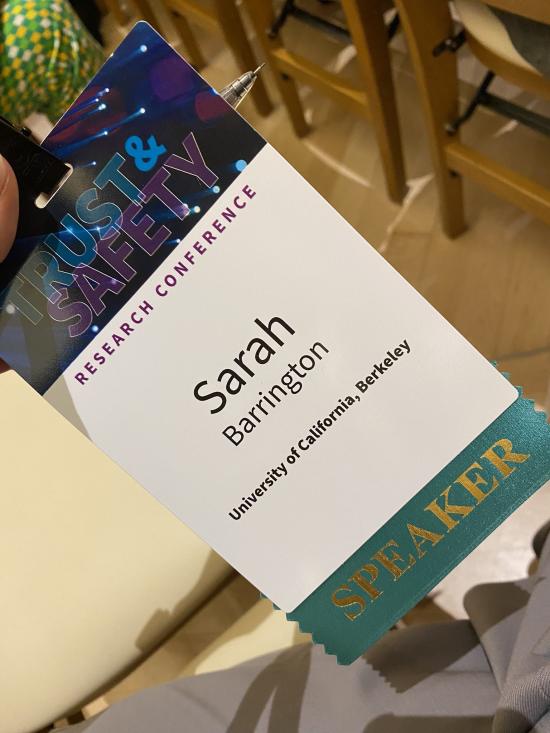 Sarah presented her research at the conference.