The School of Information is located in historic South Hall. Built in 1873, it is the oldest building on the Berkeley campus. South Hall is located in the heart of campus, near the Doe Library and the Campanile (Sather Tower). Its charming architectural style and spacious hallways create an atmosphere that encourages faculty, students, and staff to mingle and interact, giving the I School the feel of a small school in the center of a vibrant world-class university.

On March 29, 1868, the California State Legislature granted a charter for the organization of a state university to be known as the University of California. Land for this purpose was acquired in Berkeley. In 1869 the first classes were held in temporary quarters in Oakland. Forty students were enrolled.

The legislature commissioned David Farquharson, a Scottish architect who also designed the first State Capitol Building and the original building of the First Bank of California, located in San Francisco, to design the original buildings. The campus plan called for the erection of six spacious and elegant buildings that would house the colleges of Agriculture, Mechanic Arts, Civil Engineering, Mines and Letters. These buildings would be grouped around a central library building designated as the Hall of California.

Anxious to begin construction of the new campus, the Board of Regents decided to use funds on hand and authorized the laying of the foundations for the College of Letters and the College of Agriculture, to be known as North and South Halls, respectively. Work commenced in May, but the limited funds soon expired. In 1872 the legislature appropriated $300,000 for the completion of these two buildings. South Hall was completed in 1873 for a total cost of $197,000. Its four stories contain 29,500 square feet.

Dreams of a central library building were finally realized in 1877 when H.D. Bacon donated $25,000 for this purpose, and Bacon Hall was erected. Ultimately, five of Farquharson's original six buildings were constructed.

South Hall stands as the sole survivor of the original university nucleus. In addition to the College of Agriculture, South Hall also housed laboratories for the physical and natural sciences. Over the years it has also housed the Business School, Department of Economics, Political Science and Sociology, and the Library School. The oldest building on campus, South Hall is now home to the newest professional school, the School of Information.

The building's importance lies in its being a rare example, particularly on the West Coast, of a European architectural style which swept the country in the last half of the 19th century. South Hall's structure may represent an early, conscious attempt to design an earthquake-proof building. The structural system of walls of brick cells rather than continuous masonry certainly reveals an early approach to fireproofing. In fact, this aspect of the building and not its style gave south Hall a higher preservation priority than North Hall, razed in 1917, and Bacon Hall, razed in 1961.

South Hall exhibits the stylistic traits of the Second Empire Style, although modified in its decorative detail. The mansard roof is enlivened by banks of dormers with ornamental hood moldings, oiel de boeuf windows, iron cresting, and numerous chimneys and exhaust flues for the former chemistry labs. Beneath the bracketed cornice on the North and South facades are low relief panels of cast iron coated with sand paint depicting the state's native fruits and grains. The East facade, now the most visible, has a central block with wings marked by separate roof forms and exterior chimney breasts. A modified form of fluted cast iron pilaster reinforces the buildings corners and marks the division between the wings and central block. A variety of window heads and moldings are used throughout the building. The molded, cast iron windows and spandrels strengthen the horizontal division between the first and second floors. The ground floor is treated with a rusticated stone base.

The main entry stair to South Hall originally faced west, but was removed to the eastern facade after the construction of Wheeler Hall. The structure of the porch, wood painted to simulate stone, was replaced in 1997 with glass fiber reinforced concrete. The entrance porch has segmental arches and square corner supports surmounted by a balustrade with urn-like finials. Stairs descend to the right and the left. Overall, the building is detailed in a lively, eclectic manner with such notable features as satyric heads anchoring the tops of the downspouts to the walls.

The interior of the building boasts 25 foot ceilings and wood wainscoting throughout the spacious hallways. Doorways have generous wood molding, and the central stairway is surrounded by a magnificent wood banister. This central stair originally connected all four floors, but more recent fire codes required modification. In 1968, in celebration of the University's centennial and under the direction of Prof. Kenneth Cardwell, the building was renovated. At that time, the stair between the second and third floors was blocked and stairways in enclosed shafts at either end of the hall were added.

In more recent years, an elevator and wheel chair ramp were added. South Hall underwent an earthquake retrofit in the mid 1980's.

The primary classrooms are 202 South Hall and 210 South Hall, which have reconfigurable tables and chairs and built-in large-screen projectors and audio. The CoLab (110 South Hall) is a flexible space with a lounge area as well as movable tables, chairs, and white boards, to support informal meetings, group work, and individual study. Student lounges and work spaces on the ground floor support individual and group work. Wireless networking is available in all classrooms. 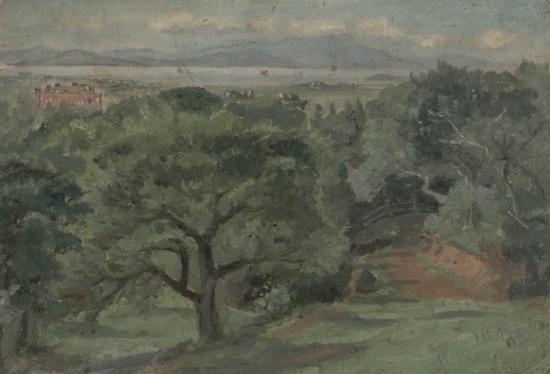 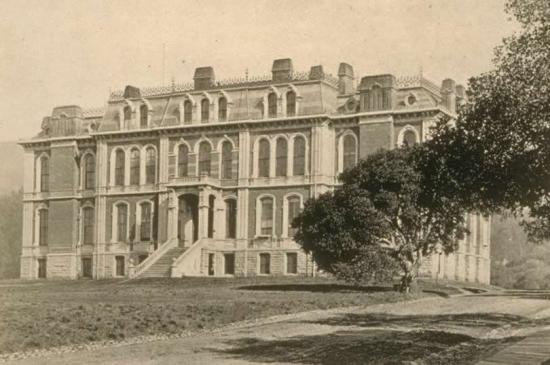 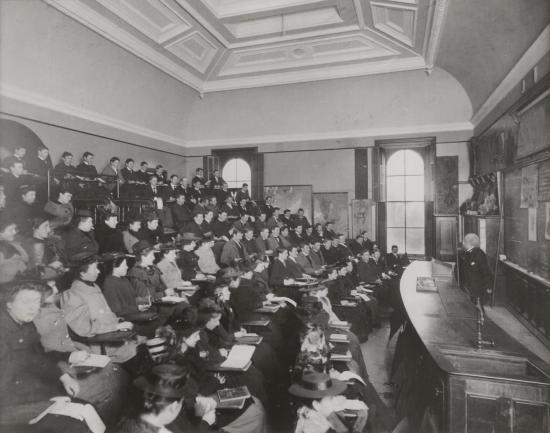 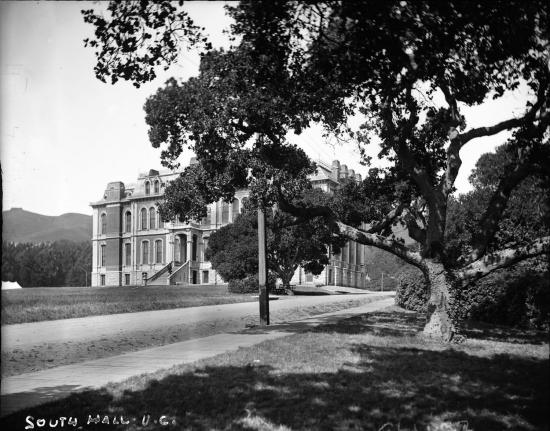 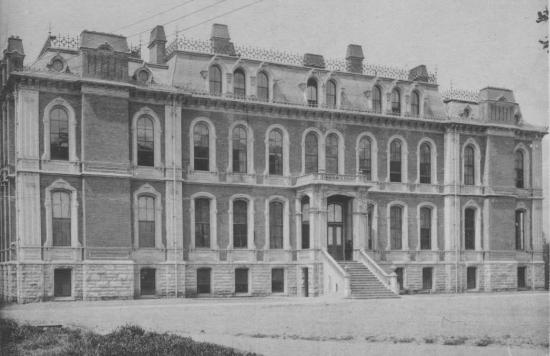 South Hall, 1901 (then the Physics Building); Courtesy of Bancroft Library. 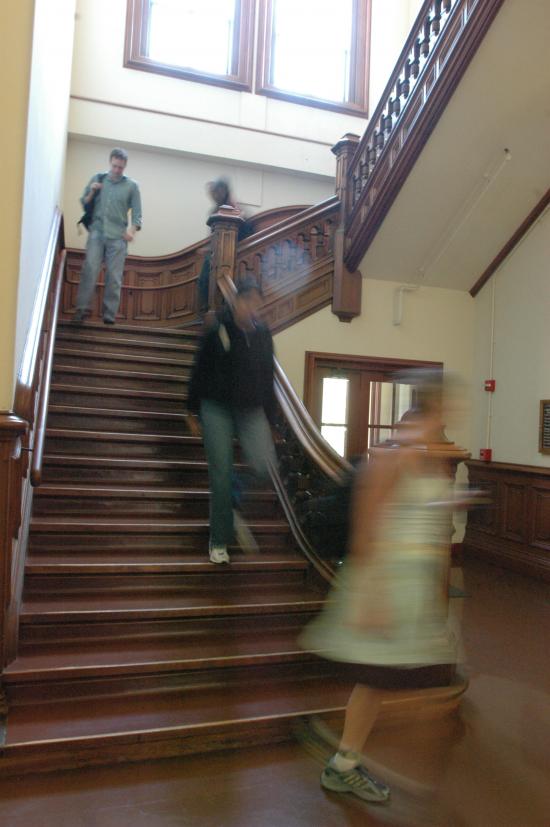 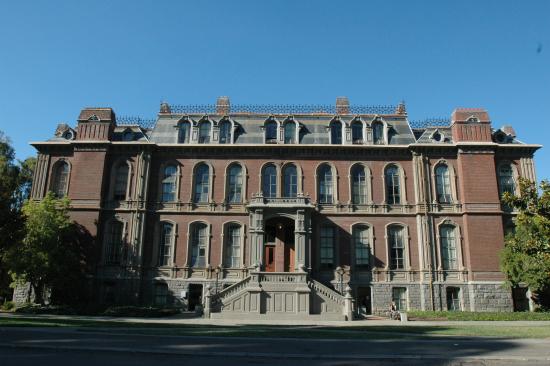