On January 12, 2019, 129 students in the Master of Information and Data Science program graduated from UC Berkeley. On a sunny day in the midst of an otherwise rain-drenched week, 68 of these graduates gathered at Hertz Hall, surrounded by family and friends, colleagues and mentors, to participate in the I School’s Winter Commencement.

The Master of Information and Data Science (MIDS) program offers a benefit dubbed “MIDS for Life,” which gives alumni lifelong access to all previously-completed coursework, recorded class sessions, and the ability to view the most up-to-date asynchronous course content. But as these graduates joined a network of nearly 400 fellow MIDS alumni, the term took on another meaning: These graduates join a dynamic international network of data scientists who will serve as a lifelong source of career advice, support, and friendship. 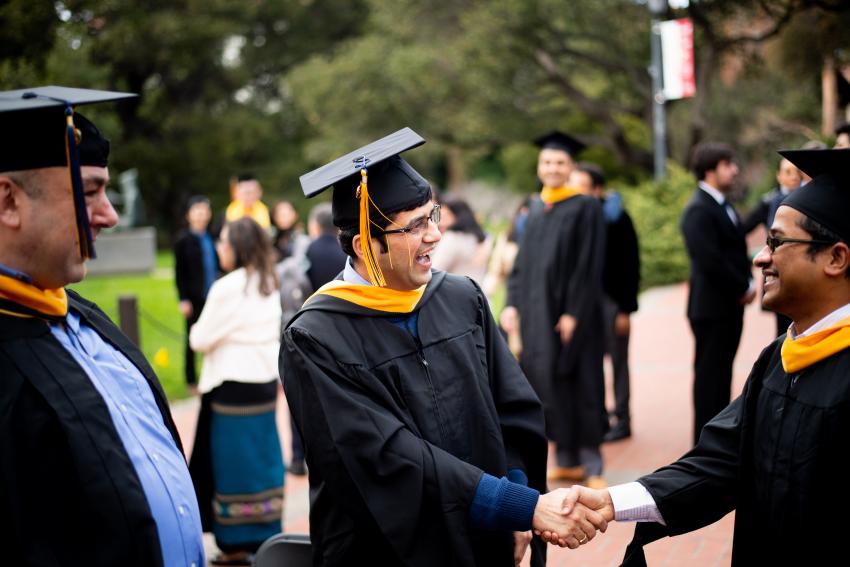 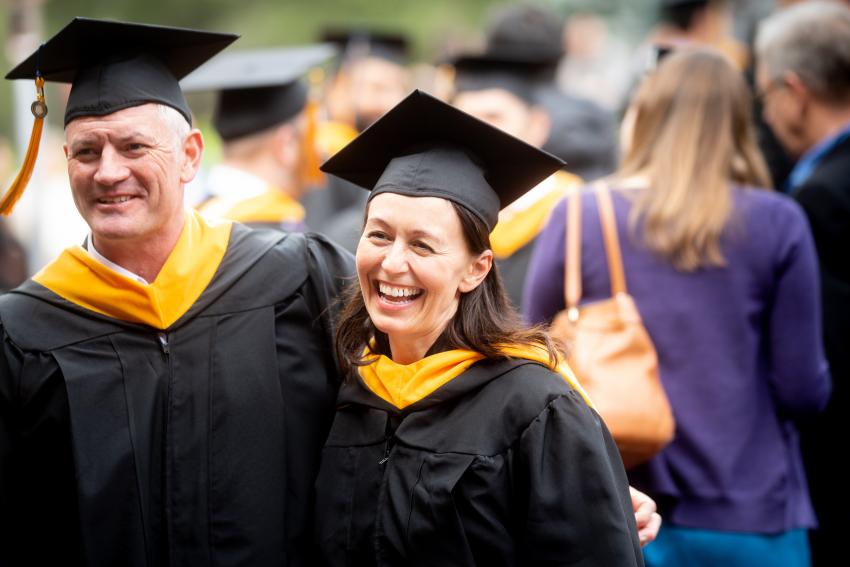 Amit Bhattacharyya, Head of Data Science at Vox Media, and instructor in the MIDS program since 2016, delivered the keynote address.

He began his remarks by acknowledging that the completion of the MIDS degree represents hard work and dedication from MIDS students, who are usually working full time while participating in the program, as well as support and sacrifice from families and friends. “In addition to students joining class from remote locations and exotic vacations with palm trees in the background,” said Amit “I have seen quite a few crying babies in class over the years as well. In fact,” he continued, “those of you who have taken my classes have probably seen my kids pop onto the screen every so often.”

To laughs, Amit attempted to define data science. “Have you ever tried explaining it to a friend?” he joked. “At the end, all the other person wants to know is what you think of self-driving cars, or the Facebook scandal, or how terrible online advertising is.”

“I was drawn to data science initially,” Amit shared, “because of machine learning and the mathematical nature of the algorithms. But in having used these types of algorithms professionally, I have come to realize that, like most things, machine learning’s results are all about the data you choose to use and the mindset of the person using it.”

“One of the strongest parts of the MIDS program is the part that has nothing to do with programming or algorithms. We learn to think carefully about the implications of our actions.”

He spoke about how the focus on the human interaction with technology sets the MIDS program apart: “One of the strongest parts of the MIDS program is the part that has nothing to do with programming or algorithms. We learn to think carefully about the implications of our actions.” He cited Asimov’s Three Laws of Robotics as an example of the apparent simplicity, but actual complexity, of programming devices to take into account ethical considerations.

He illustrated his point with a story, reminiscent of the Trolley Problem, which he named “the Parable of the Baby and the Puppy.” (“This story is entirely made up by me,” he quipped, “but maybe someday someone else will reference it and we will have started a trend.”) Amit’s parable illustrated that a data scientist programming an autonomous vehicle would have to make a value judgment about how to instruct the car to steer if two vulnerable targets are suddenly in its path — and that data science opens new ethical avenues and questions for practitioners, since a human driver’s reaction time is slower than an autonomous vehicle’s.

“The parable is not meant to be depressing,” said Amit. “It is just a reminder that there is a lot more to data science than just data science. But that is hopefully exactly what you experienced in the MIDS program at Berkeley.”

The humanity behind data science is exactly what student speaker Alberto Melgoza Paez, a Data and Systems Architect at Google, experienced in the MIDS program: “When I first enrolled in the program, I understood Data Science to be, in essence, a technical discipline. After all, it is a science, and it is data…. But I was surprised to realize how much Data Science is actually a human-centric discipline.”

Alberto shared how inspired he had been by his classmates’ capstone projects, and listed all the ways they had attempted to improve the human experience through their work.

Like Amit, he touched on how AI may replace humans or human actions in the future, but his experience in the MIDS program left him optimistic. “What I saw more clearly during the program,” he shared, “was Data Science being a force for good.”

“There is no doubt that Data Science and Data Scientists will continue to transform every industry in every corner of the world. I can’t wait to see how we transform the world together.”
— Alberto Melgoza Paez

The MIDS program connects students from all over the world. It brings them face-to-face in online classrooms building connections across oceans and time zones. It is one instance where technology brings people together, which is also how Alberto has chosen to experience data science. “Data Science is, in fact, something that allows us to be closer together as human beings. It gives us tools that help us understand each other much better, no matter how different we may be.”

“There is no doubt that Data Science and Data Scientists will continue to transform every industry in every corner of the world,” said Alberto to his fellow graduates. “I can’t wait to see how we transform the world together.” 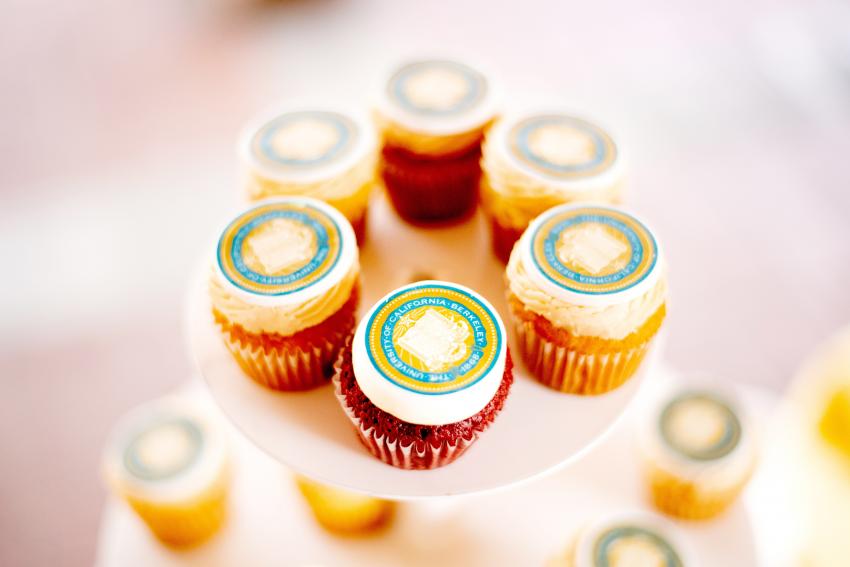 All photos by Noah Berger Photography. 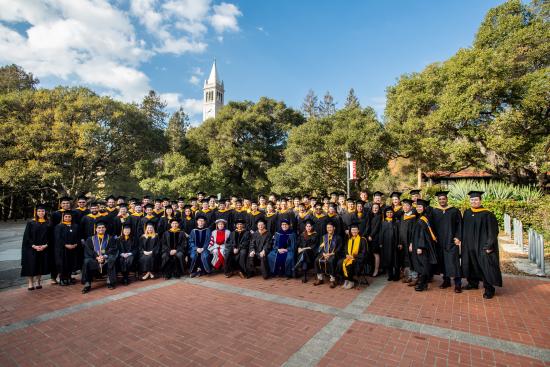 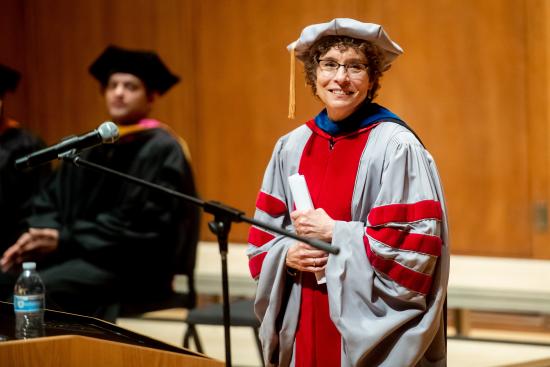 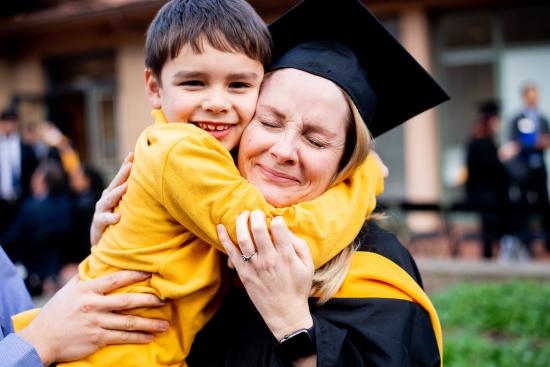 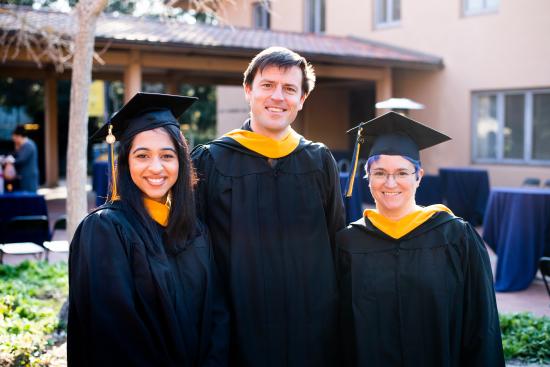 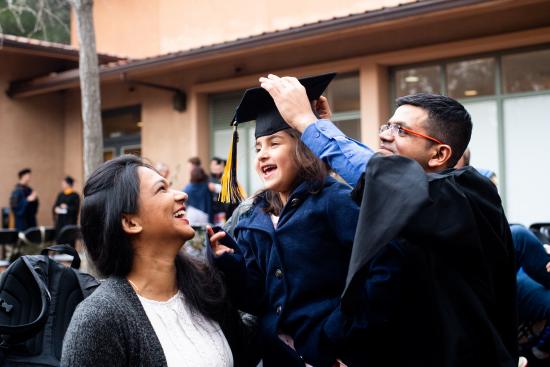 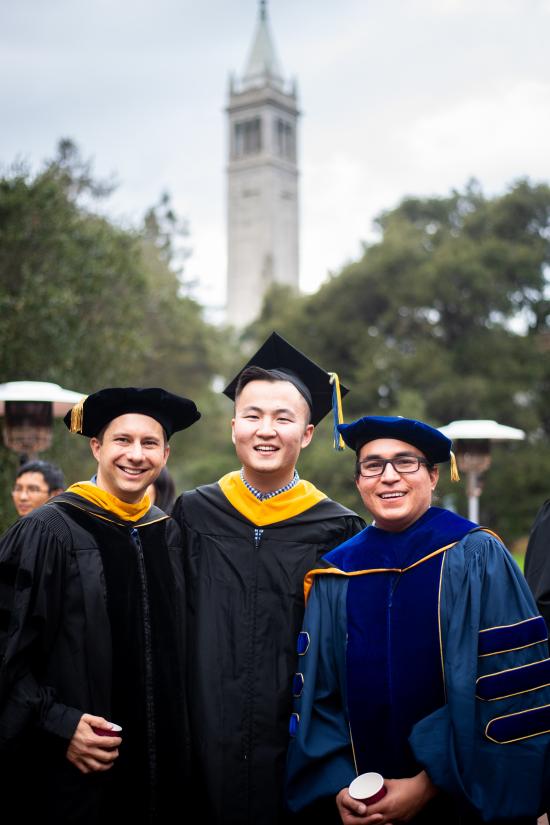 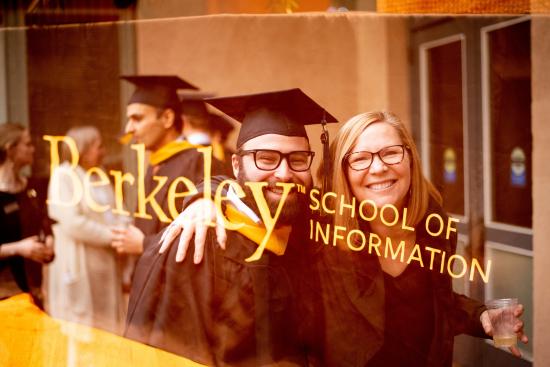