The keynote speaker encouraged the audience to “notice the feelings of love in your body,” and the student speaker described a family of data scientists armed for a fight to use data for good — the School of Information Winter Commencement ceremony on Sunday, January 21, 2018 was an unusually emotional celebration of the 101 Summer and Fall 2017 graduates of the Master of Information and Data Science program.

The sentiments on display exemplified the remarkable intimacy of the online MIDS program. Although students are separated by geography and time zones, and span a wide range of ages and backgrounds, they are perhaps more connected than students in a traditional degree program.

In her opening remarks, Dean AnnaLee “Anno” Saxenian described the dedication required of MIDS students to participate in such a rigorous and demanding program; most students work full time, and many have families and children. Some student stories she shared:

“Our son was born just two weeks before I started my first week of the MIDS program. He's now 'one MIDS program' old, having just turned two at the end of December.” –Geoff Stirling

“In truth I feel like I've been baptized, and the honor of working and learning with this collection of bright and energetic minds, both students and instructors, was entirely mine.” –Michael Rubin

“As a result of the MIDS program, I got a new job performing data analytics for the strategy team at the Children's Hospital of Philadelphia, one of the leading pediatric hospitals in the world.” –Matthew Acconciamessa

Keynote speaker, Adjunct Professor David Reiley, was one of the first faculty to join MIDS program, and the winner of the MIDS Distinguished Faculty Award in May 2016. An economist in the advertising-science group at Pandora, he joked: “an economist is someone who looks at something that works in practice and wonders how it would work in theory.”

“My most cherished values and most important skills: curiosity and empathy, or, science and love.”
–David Reiley

Then, in a surprising departure from stereotypes about economists and scientists (or perhaps only surprising to those who don’t know Reiley), he moved on to what he described as “things that matter deeply,” and the two skills he values most: curiosity and empathy, or, science and love. While it’s easy to find institutions that help us develop cognitive skills, Reiley said, it’s harder to find ones that help us develop emotional skills. He stressed the importance of cultivating empathy in order to have to have more love in one’s life and shared that he has studied these topics deeply, offering to email anyone interested with his recommendations for self-help books and workshops.

Reiley then shared his tips for developing the skills that have helped him cultivate more love for other people:

Reiley’s students know that he loves to sing, accordingly his speech ended in song. Reiley serenaded the audience with the first verse of “Love Changes Everything” by Andrew Lloyd Webber:

Reiley was inarguably a tough act to follow, but student speaker Dominic Delmolino held his own with a speech on family and the MIDS program. Delmolino, a 25-year veteran of the IT industry, shared that he owed his commitment to the daunting task of applying to MIDS to the support of his wife Wendy and their teenage children. He shared that it was his wife’s “steadfast confidence in me and clear statement of support [that] moved me to take those first steps: unearth old transcripts, order graduate exam prep materials, and for the first time in over 20 years, study for a life-changing exam.”

“When I started in the program,” Delmolino shared, “I tried to set up a good place to study. I tested my computer, headphones, tried to learn the software, and made sure I could give class time my full attention. Little did I know that I was about to join another family — a group of nervous and thoughtful people whose desire to learn meant inviting a collection of strangers into their homes.”

“As we cross the threshold of graduation today, we are about to become part of an even larger family of responsible and ethical data scientists who have preceded us in the MIDS program.”
–Dominic Delmolino (MIDS ’17)

Delmolino’s remarks exemplified what sets MIDS apart from other degree programs. While students may never meet in person, they connect and collaborate, and have created an extraordinary community:

“And what a family we became... We smiled at children who wandered in on class, and we laughed at pets who dropped in to see what we were doing. Sometimes we'd see each other three to four times per week, in class, in study groups, all the while trying to juggle our minds and keep our focus on our desire to learn.”

Delmolino ended his remarks on a thoughtful and inspiring note: “As I listened to many of you ask questions, describe your experiences and present your ideas and conclusions in class, I'm confident we'll be able to provide clarity and truthfulness to a world sorely in need of both. I'm excited to join that family [of data scientists] and proud to have my fellow graduates among my brothers and sisters in arms as we fight to use data to improve society in meaningful, impactful ways.”

In a nod to the family friendly atmosphere, and reference to the occasional squeals from the many small children in the crowd, Dean Saxenian acknowledged (much to the relief of the anxious parents in the audience) that she loved having so many babies in attendance. She then announced the Distinguished Faculty and Hal R. Varian MIDS Capstone Awards.

Dean Saxenian ended the program with an appeal to the graduates to stay connected to each other, to the I School, and to the cohorts to come — “Help us build the MIDS community to something that will benefit all of us.”

“I couldn’t be prouder of every single one of you,” she ended, “now, let’s go out and party!”

The 101 graduates of the Master of Information and Data Science program include 35 from the Summer 2017 class and 66 from Fall 2017. Fifty-seven graduates were in attendance on Sunday, traveling from all over California, Colorado, Connecticut, Georgia, Idaho, Illinois, Massachusetts, Michigan, New Jersey, Nevada, New York, Oregon, Pennsylvania, Texas, Utah, Virginia, and Washington State. Of the 101 graduates, 14 are international students, representing at least seven countries; they are 28% women. 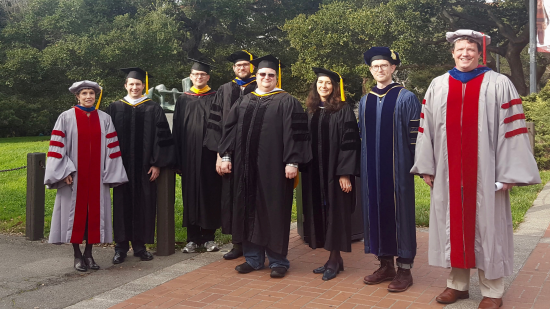 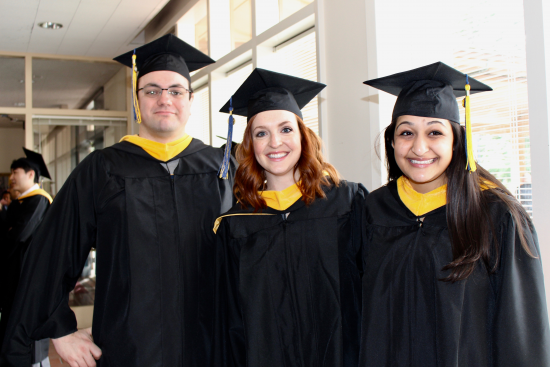 Excited graduates wait for the ceremony to begin 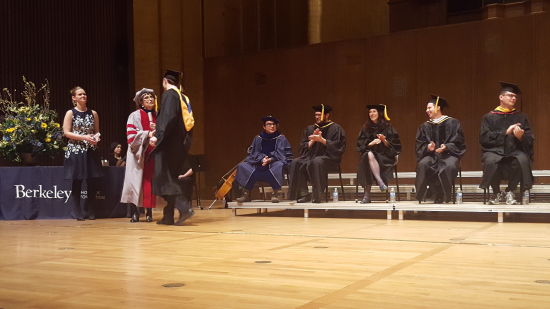 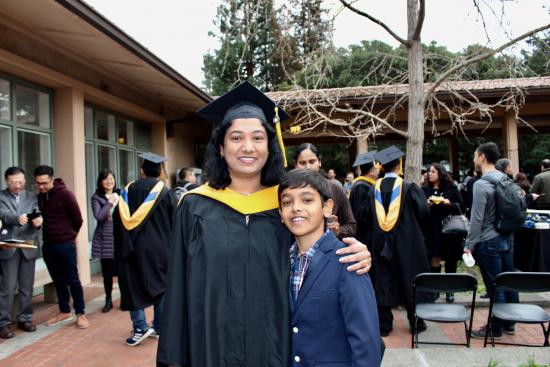 Many students had children of all ages in attendance