A passion for social good, an entrepreneurial spirit, and a tech-savvy I Schooler is a powerful combination. Many of our students and alumni build their own startups, often with the goal of social justice or for the benefit of society. Following her 2015 MIMS graduation, alumna Meredith Hitchcock co-founded RideAlong, a software tool to help government staff support stigmatized and vulnerable citizens. She currently serves as the company’s chief operating officer.

RideAlong began as a Code for America project and developed into a software company that builds products to help frontline city and county workers the information and context they need to better assist local residents.

We spoke to Meredith to learn more about her company and her passion for criminal justice reform:

How did RideAlong come to be?

I co-founded RideAlong because I’m passionate about criminal justice reform. I read Michelle Alexander’s The New Jim Crow [subtitled: Mass Incarceration in the Age of Colorblindness] in my second year at the I School, and was inspired to find a way that I could use my skills in user experience design and research for good.

Incarceration has a long-lasting negative impact on both individuals and communities. It affects people’s ability to find jobs, secure housing, and vote, among a list of other things. People with criminal records are structurally set up to fail. This disproportionately affects communities of color. As a mixed-race woman, these issues are personal to me.

I am passionate about helping people who are stigmatized in our society. RideAlong does that by giving government staff who work with them every day the right tools. The government staff we build software for are doing physically, mentally, and emotionally difficult work. And a lot of the time, they’re doing it with essentially no information, just notebooks, or their memories. We recently started customizing our app to meet the needs of homeless outreach workers. If I can order cookies to be delivered to my office in under 30 minutes, first responders, homeless outreach workers, and service providers should have the basic software they need to do their work.

“If I can order cookies to be delivered to my office in under 30 minutes, first responders, homeless outreach workers, and service providers should have the basic software they need to do their work.”
— Meredith Hitchcock

How does RideAlong work?

RideAlong builds software that empowers cities with real-time information about residents who are experiencing mental illness, drug addiction, and homelessness. Five percent of people account for about 50% of emergency services expenditures in the US. RideAlong builds software to serve them and bring that number down. With RideAlong’s flagship product, police officers heading to 911 calls can quickly see personalized tips to avoid the use of force, calm the person down, see what services to offer the person, and see contact information for the person’s support system. This enables cities to save millions of dollars. They can re-duplicate services, coordinate efforts across departments, and divert people away from jails and prisons.

A single person, a “high-utilizer” of services, might have 75 separate contacts with the police department, fire department, multiple case managers, hospitals, and other service providers in a year. Right now, those departments have no way of knowing those other interactions occurred, or what services were provided. They exist in silos. We want to support governments in uniting that conversation, connecting people to appropriate services, and preventing people from entering the criminal justice system.

At RideAlong, our initial focus is on supporting individuals experiencing mental illnesses. The U.S. Department of Justice’s Bureau of Justice Statistics (BJS) found that 64% of local jail inmates, 56% of state prisoners, 45% percent of federal prisoners have symptoms of serious mental illnesses. Those numbers should alarm all of us. In the US, we’re treating a public health issue as a criminal justice issue. I see RideAlong’s first software tool, Crisis Insights, as a way to help reduce the likelihood of people with mental illnesses being incarcerated and to help connect them to the services that will provide long-term support.

How did your I School experience influence your work or support your success with RideAlong?

Both my experience at the I School and the alumni network are part of what led me to co-found RideAlong. In my second year at the I School, my peers were working on capstone projects that focused on issues like making access to food stamps more dignified. As I was graduating, I realized that I wanted to do something similar with a focus on criminal justice reform. I wanted to do work that had a large impact on people, even if it was on a small group of people, and I saw working with the government as the way to do that.

The larger discourse in Silicon Valley is finally catching up with much of what was emphasized at the I School: technology exists in a social context, and we as people who make software have to be responsible with that we build. On a daily basis, I’m faced with issues that came up in I School courses.

The I School’s focus on observing users and listening to them is also a guiding force in our process. We build all of our software with a basis in generative research and usability testing. We’re building software to help first responders and homeless outreach workers safely, effectively respond to residents experiencing mental illnesses, substance abuse issues, and homelessness. The I School guided me to keep people at the forefront of everything we build.

“The I School built my confidence to tackle an ambiguous problem and come up with a human-centered solution.”
— Meredith Hitchcock

I use the skill sets I learned at the I School on a daily basis, particularly information visualization, design, and research. The structure of the courses was also important: many of the courses at the I School are project-based and involve working with a group that has a mix of skill sets. These courses involved moving from a general problem to a defined, prototyped solution through research and testing. My co-founder and I got started with RideAlong through a year-long fellowship with the non-profit Code for America, working as a three-person, multidisciplinary team to do research and create a minimum viable product (MVP) with the Seattle Police Department. It was a larger, more complicated version of the structure I had learned at the I School. The I School built my confidence to tackle an ambiguous problem and come up with a human-centered solution.

What is your advice for current students who want to pursue entrepreneurial ventures?

Do it! We need more people with I School skill sets and mindsets working on problems that feel intractable. I’m risk-averse and never envisioned starting a company. But I fell in love with a problem, and the desire to solve it was stronger than risk aversion. This advice is frequently offered to startup founders because it’s true: find a problem you’re obsessed with. Then, be obsessed with the problem rather than the solution. Founding a startup is difficult, especially so when it is a social good startup. I’m able to stay motivated through the low points and failures because I’m passionate about decriminalizing mental health and giving cities tools to help create a safety net. Being focused on the problem rather than the solution also puts you in a learning mindset. My other advice is to ask for help. You don’t have to — and shouldn’t — do everything from scratch. Talk to people who have started companies, talk to people who are experts in your problem space, talk to people who are doing similar work. And after you get their advice, ask them to introduce you to other people who can help.

Banner image via getridealong.com, all other images courtesy of Meredith Hitchcock. 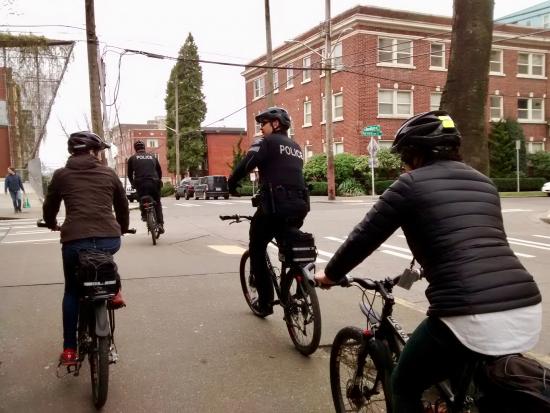 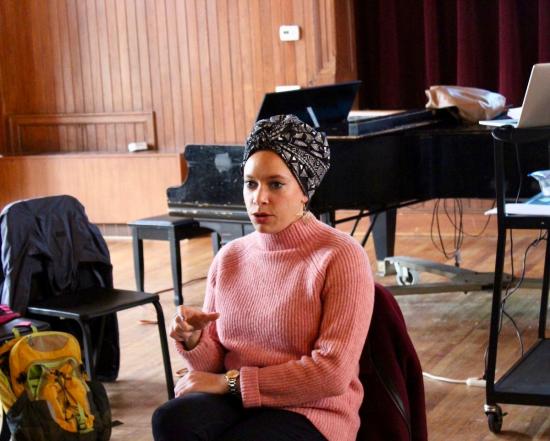 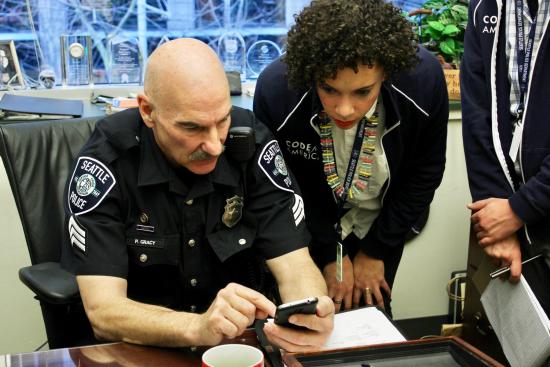 Meredith does a RideAlong phone demo with Seattle PD 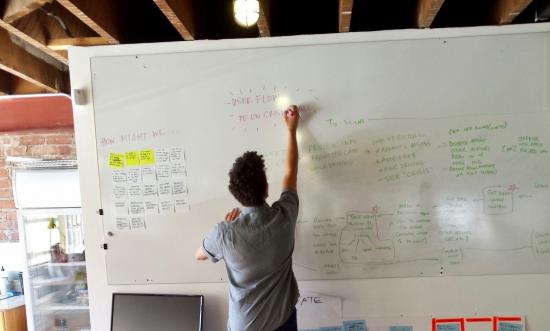