On May 12, 2018, 104 graduating School of Information students gathered at Hertz Hall, the largest graduating class at the I School to date. The sky was blue, the campus was drenched in sun, and the collective excitement of thousands of Cal graduates posing for photos and celebrating with family and friends was infectious. 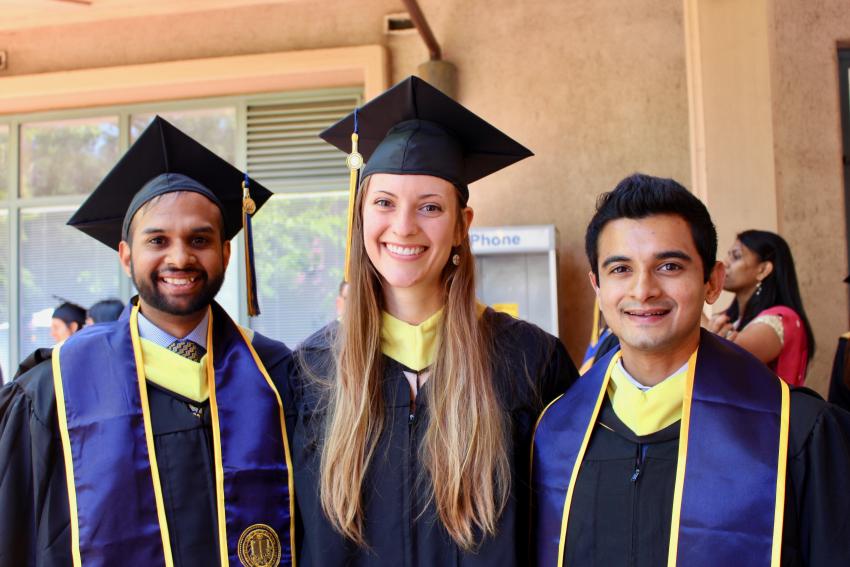 Like the I School, the commencement ceremony was intergenerational and family-friendly, with multiple students crossing the stage with their children. Speeches were punctuated by the laughs and cries of young children and babies throughout the audience. At least six babies were born to MIMS 2018 graduates and at least two babies were born to MIDS Spring 2018 graduates during their time at the I School. One baby was born on the last day of classes last December and was at the ceremony on Saturday as a five-month-old. 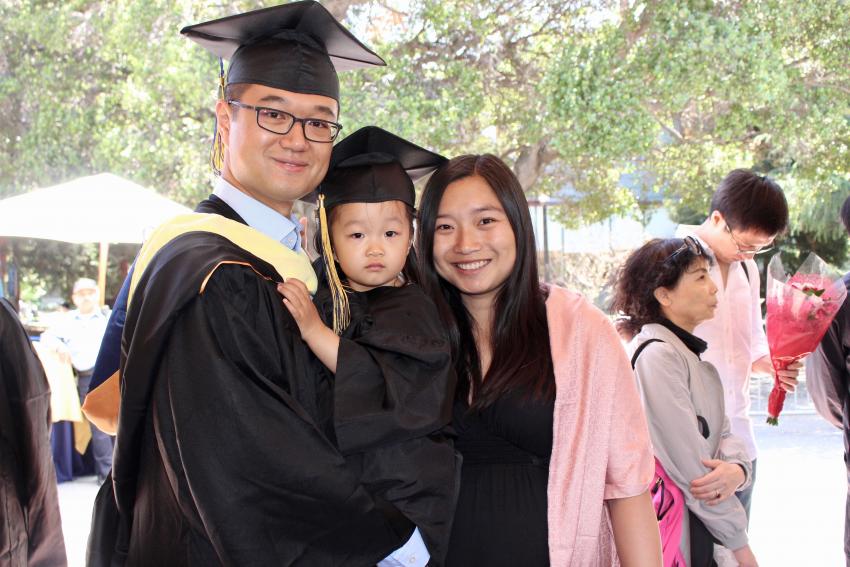 Joseph Lorenzo Hall delivered the keynote speech, almost exactly 10 years to the day from his own Berkeley I School graduation, at which he was the student speaker. Hall remarked on how much has changed since 2008, and how much change we will see in the next 10 years

“This is just to remind you,” Hall said, “that the technologies taking baby steps today will be beyond what we can imagine in ten years.”

In this 150th Anniversary of UC Berkeley, please keep in mind our simple but powerful motto, fiat lux, which is the exact opposite of black box thinking.
–Joseph Hall

Hall, who is the Chief Technologist and Director of the Internet Architecture project at the Center for Democracy & Technology, a Washington, D.C.-based non-profit advocacy organization, told the audience that in the 10 years since he graduated from the School he found purpose working in civil society – rather than industry or academia: “I found my calling, my avocation, so to speak, something beyond a mere career or occupation. I urge each of you,” he told the graduates, “to keep your eyes peeled and ears open for when this might happen to you.”

Hall’s Ph.D. work was focused on black box systems (his dissertation was titled: “Policy Mechanisms for Increasing Transparency in Electronic Voting”). He ended his speech with an appeal that the graduates use the skills and knowledge they had acquired during their time at the School for good:

So I'll end with a plea: using black box systems to deceive, to hide important interactions, or to obfuscate, I would argue is a poor use of the education you worked so hard for ... In this 150th Anniversary of UC Berkeley, please keep in mind our simple but powerful motto, fiat lux, "let there be light," which is the exact opposite of black box thinking.

MIMS student speaker Edward Yip contended that it was disappointment in the status quo that drove the graduates to study at the I School. From disappointment arose his passion to do things differently, a passion that only grew throughout his two years in the MIMS program: “This is what these last two years have taught me: that disappointment gives way to greater purpose.”

Yip echoed Hall’s sentiment that his peers would use what they’d learned at the I School to improve the world. “It is our shared journey,” he said, “and our ability to persevere in spite of disappointment, in creating good out of disappointment that will shape our legacy and the I School’s legacy moving forward.”

“Whether we care to admit it,” said Yip, “it’s been our collective disappointments that have been the harbingers of hope, of direction, of growth, of community, and it is our perseverance through disappointments and failures that gives me great hope for our next endeavors.”

MIDS student speaker Ashton Chevallier is one of the first officially titled “Data Scientists” at Cisco Systems. He noted that, through recruiting at Cisco, they have found the most well-rounded data scientists are coming from UC Berkeley. “Data Scientists know that Machine Learning is only a tiny part of the real problem; the rest is actually held together by human glue.” Chevallier told his graduating MIDS class, “Cal makes Data Scientists. We are REAL Data Scientists.”

Chevallier’s spirited remarks drew laughs and cheers from the audience, but ended in earnest:

In closing, I’d like to make a bit of a call to action. Our world is changing ever more rapidly and power is being handed over to machines to make ever more important decisions. As people who understand and build artificial intelligence, it is our duty to help inoculate the public against its worst tendencies ... I challenge you to vote, run for public office and donate your time to making the world a better, less biased place … Go Bears!

Two I School Ph.D.s graduated on Saturday, Sebastian Benthall and Nick Merrill, who spent 7 and 5 years at the School respectively. Benthall remarked on the significance of the doctoral degree:

It is the many false starts, mistakes, and detours that comprise the real education of the doctor of philosophy. The contents of this curriculum are vast, personal, uncountable, and not easily put into words. It's a conundrum, then, to give a two-minute speech at the end of what for me has been a long process of seven years. And yet that conundrum is itself an accomplishment.

121 students graduated from the I School on May 12, including the two Ph.D. students, 70 MIDS students (the largest MIDS graduating class to date), and 49 MIMS students. Of those 121 students, 36% were women. Our graduates came from at least 12 countries (the US, Canada, China, Germany, India, Italy, Kenya, Mexico, Pakistan, Russia, South Korea, and Taiwan) and within the United States, from at least 19 states and the District of Columbia.

As the program thrives, so does the School’s influence in the world at large. Edward Yip referenced an I School legacy “worth fighting for” and alluded to the remarks of last year’s MIMS student speaker, Paul Glenn (MIMS '17):

As members of the School of Information, we are anywhere and everywhere technology needs us to be. To be visionaries of what can and cannot be, but also defenders of what should and shouldn’t be. To know not just what heights and marvels to achieve but more importantly, how to achieve them. To truly be masters of information — using information, in all its ugliness, beauty, and glory … to create technologies and improve society not because it can make money, but because it is the right thing to do, the good thing to do, the beautiful and true thing to do. 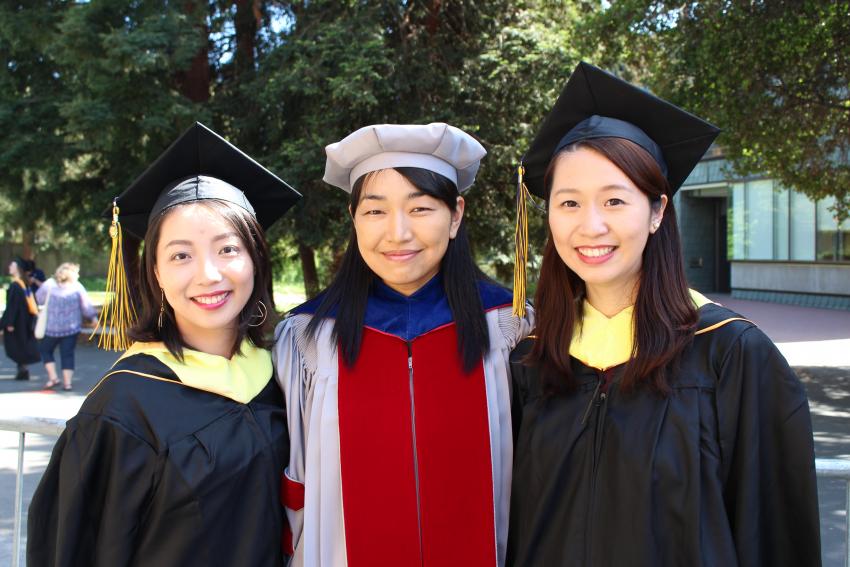 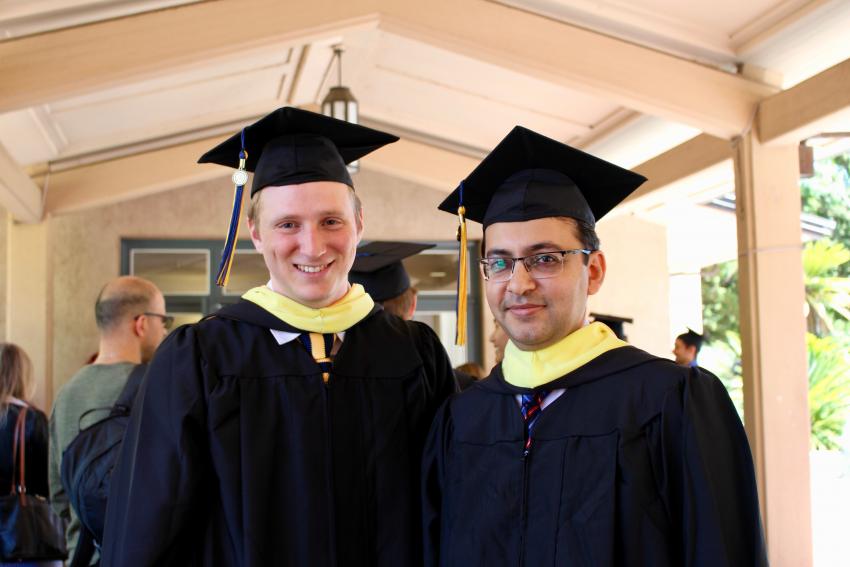 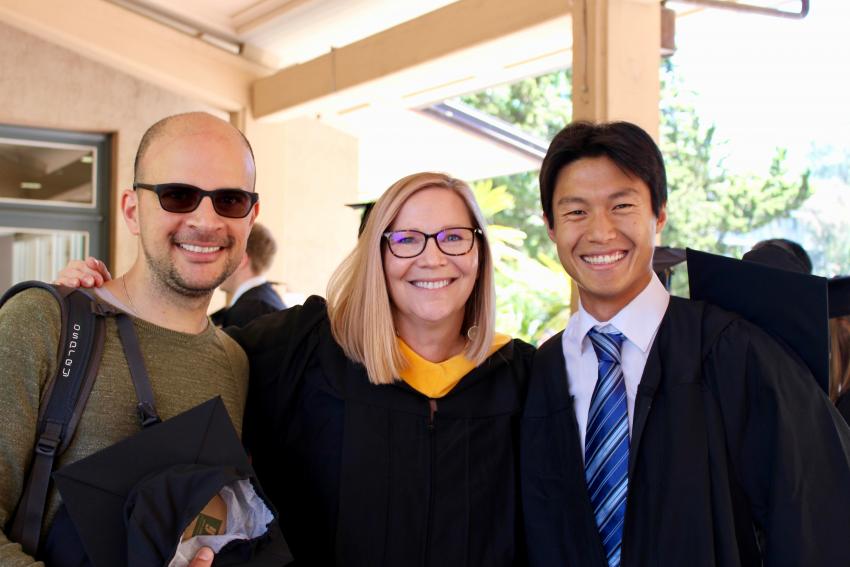 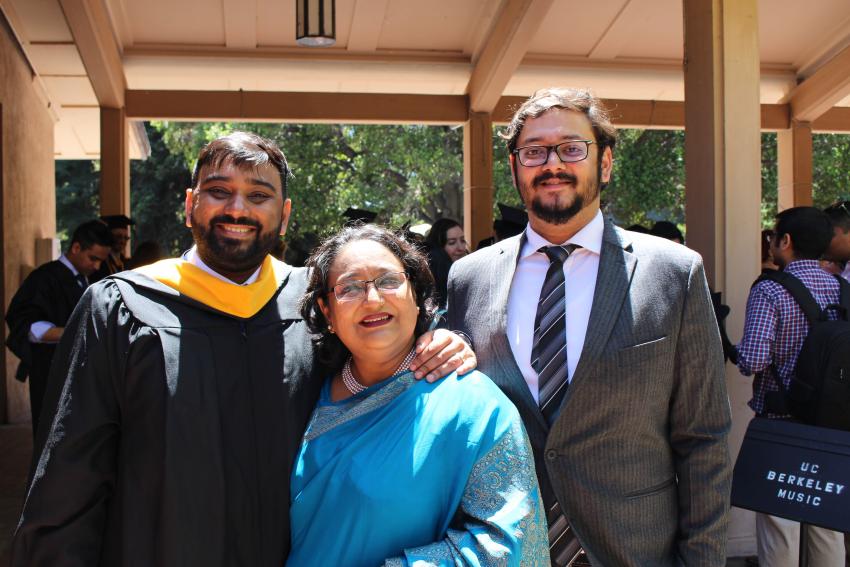 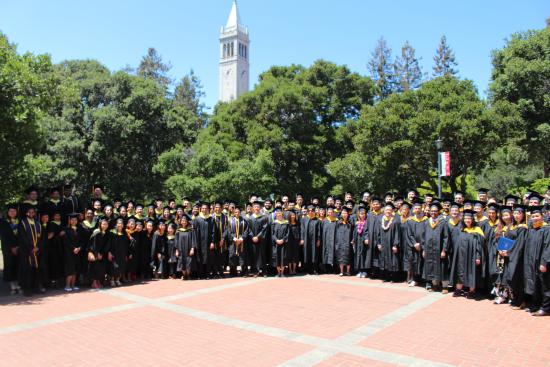 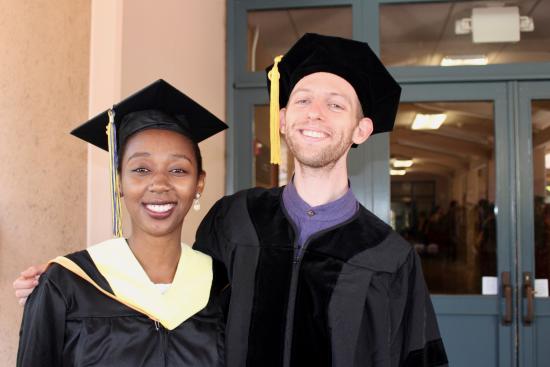 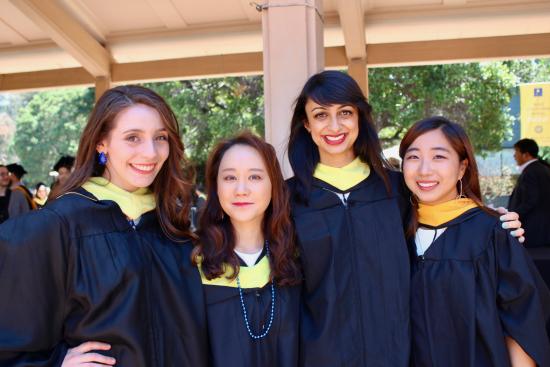 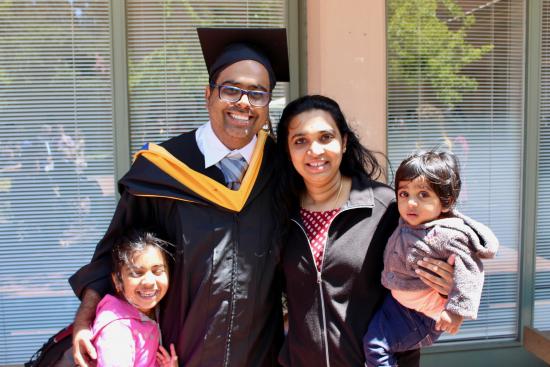 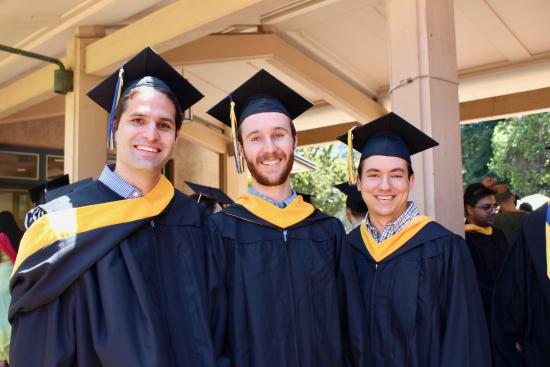 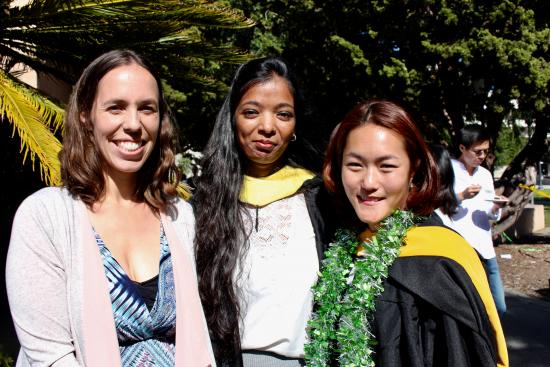 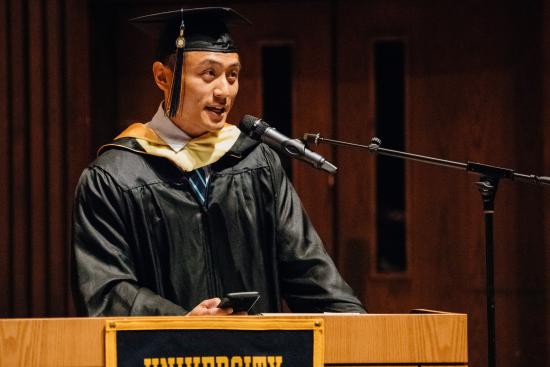 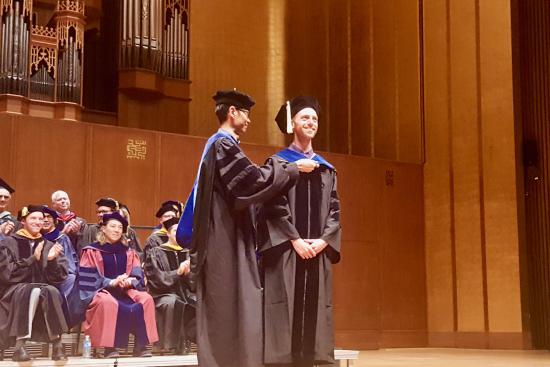 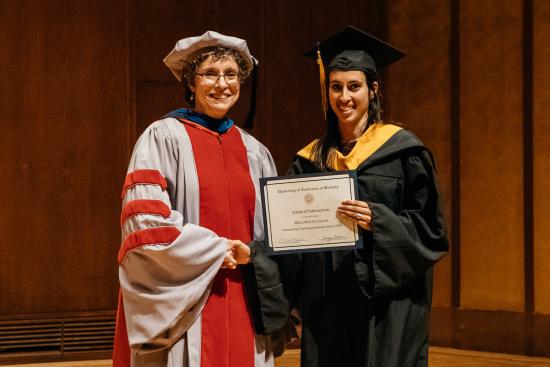