On Saturday, May 17, friends and family gathered at the Campanile Esplanade to celebrate this year's graduates of the UC Berkeley School of Information. The class of 2008 included 33 master's degrees and 5 doctoral degrees.

After welcoming the audience, Dean AnnaLee Saxenian introduced the commencement speaker, Genevieve Bell, the director of Intel's User Experience Group. As an anthropologist working for a technology company, Dr. Bell gave the graduates what she described as her "anthropological advice." She encouraged the graduates to "cultivate a strong sense of curiosity" and to "ask stupid questions about new technologies, information systems, and sociotechnical practices." She charged the graduates to "own being experts, and manage the power that it accords you with humility, not arrogance."

Joseph Hall spoke on behalf of the doctoral students. After pausing to take a photograph of the crowd from the podium, Hall thanked the I School faculty, staff, and fellow students, along with their parents, families, spouses, partners, and significant others, for "putting up with us".

"We have engineers, ethnographers, mathematicians, cognitive scientists — oh yeah, and a professional snake sexer. That means he can determine the sex of a snake. (It's hard!).

"We came from everywhere: we came from China, Italy, Russia, Germany, Thailand, India, and Topeka, Kansas."

Master's students Kevin Lim and Igor Pesenson reminisced about their time in the I School in a speech "rife with inside jokes", according to Lim. They recalled a series of anecdotes about classmates, coursework, professors, their winless intramural softball team, and "the time someone spilled a gallon of milk into the carpet [in the student lounge]. And spilled milk turns into spoiled milk pretty quickly." They recalled listening to campus tour guides "spreading misinformation about us, telling everyone that we're the 'Ministry of Information' or the data-entry school."

Lim and Pesenson especially thanked their classmates, whom they described as a "peer-to-peer network" of amazing people, including their fellow student (and NSA operative) who "found a way to get a parking spot on campus that's better than any Nobel laureate's parking spot. But she will not tell you how!" 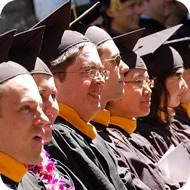 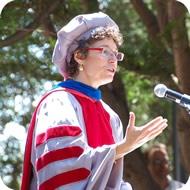 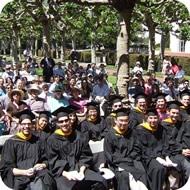 The commencement crowd, as seen from the podium. (photo: Joe Hall) 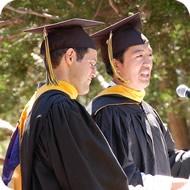