Pop Up Archive: From MIMS Final Project to Apple Acquisition

On December 4 news broke that Apple bought Pop Up Archive, the Oakland-based startup that began as a MIMS Final Project in 2012. Pop Up Archive makes tools for transcribing, organizing and searching audio files, and included a podcast search engine tool, Audiosear.ch, which was shut down on November 28 (presumably in preparation for this acquisition).

Pop Up Archive was co-founded by MIMS alumnae Bailey Smith and Anne Wootton. It started as Pop Up Radio Archive, a Chen Award-winning MIMS Final Project in 2012 that was a collaboration between Smith, Wootton, and fellow master’s student Christen Penny. In addition to the Chen Award, the project was a finalist in UC Berkeley’s “Big Ideas” competition and won a $300,000 Knight News Challenge grant.

The two years of coursework at the School of Information gave the three students the skills they needed to address the challenge they saw in in organizing digital archives. Courses in user-interface design and user experience research emphasized the importance of a nuanced understanding of their users’ needs and work practices. Courses in information organization taught them the value and challenges of different metadata systems and standards.

“Without the Berkeley I School, Pop Up Archive would not have existed. Not only did Bailey and I meet there, we spent the master’s program honing skills, building relationships, and prototyping a thesis that laid the foundation for all of our work over the past five years.”
– Anne Wootton, Pop Up Archive co-founder, MIMS ’12

“Without the Berkeley I School, Pop Up Archive would not have existed.” Anne Wootton told the I School on December 5, following the acquisition. “Not only did Bailey and I meet there, we spent the master’s program honing skills, building relationships, and prototyping a thesis that laid the foundation for all of our work over the past five years.”

Since 2012 Pop Up Archive has grown from various seed investments and grants from sources including Bloomberg Beta, 500 Startups, and the Knight Foundation. According to Nieman Lab, the company also has a close relationship with Public Radio Exchange (PRX), and in 2012 the two organizations partnered up to build PRX’s original web-based archive system.

Apple has not yet disclosed its plans for the acquisition; the company told TechCrunch that “Apple buys smaller technology companies from time to time, and we generally do not discuss our purpose or plans.” We’re excited to see what’s to come from the tools Smith and Wootton created, and what future MIMS projects will bring to the world!

I School Alums Win Prestigious Knight News Challenge
The Pop-Up Archive, first developed as a 2012 MIMS final project, is an open-source software system to streamline the entire workflow of a radio producer. Now the Archive is the winner of a $300,000 Knight News Challenge grant.
How the Pop-Up Radio Archive Is Saving Culture

Three School of Information master’s students are working with a pair of independent radio producers to solve a longstanding information-management and archival problem. And now the three have been named finalists in a competition for innovative, high-impact big ideas. 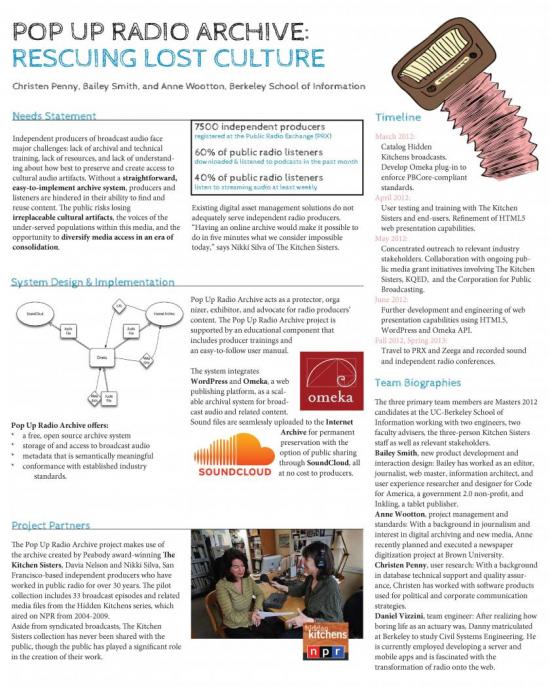 Poster from the original Pop Up Archive MIMS project