Pollster is a micro-survey platform which enables users to poll trained experts for targeted feedback.

If you have a simple question you can create a poll and send it out to voters in our system. You can pick which voters you’d like to reach, based on information they have provided. You can even create training questions to help them get better at giving you high-quality feedback, and you can reward them for doing so.

If on the other hand, you’re a user without a pressing question, you can join our system as a voter. Voters are rewarded for answering micro-surveys sent to them, and their feedback can then be integrated to support smarter decision-making.

Joan is a marketing executive at a new fashion start-up and is two weeks away from the launch of a major ad campaign for their newest product, and there’s a problem. Two slogans have been put forward as the best candidates to go on the ads, but no clear winner has emerged. After two months of discussion, paralysis has gripped the creative team and Joan is stuck. There isn’t enough time to enroll the services of a market research firm, and even if there were – they wouldn’t be able to afford it. Making smart decisions can be difficult.

Alex is a stay at home parent who used to manage a chain of small retail stores that catered to the same clientele as Joan’s company. Alex has been looking for ways to earn a little extra income for his family, but his kids keep him busy and his schedule is often erratic. He’d love a way to earn money while he’s sitting in the school parking lot, or when he’s in line at the grocery store. In a perfect world, Alex would love to be paid for doing something with his mind and not his hands.

The Pollster platform is built to support informed decision-making by connecting individuals like Joan to a targeted crowd of experts like Alex. By creating an account, Joan can create a one-question micro-survey and can filter the Voter Community to ensure her poll only reaches the right kind of voters. Alex’s phone alerts him that a new poll has arrived in his inbox and tells him how much he’ll receive for answering it. Alex opens the poll, reads the prompt, selects the ad his expertise tells him will best resonate with Joan’s customers, and gives Joan some short feedback. After three days, Joan’s poll has received feedback from 40 experts in the field, and she now has the insight she needs to move forward. 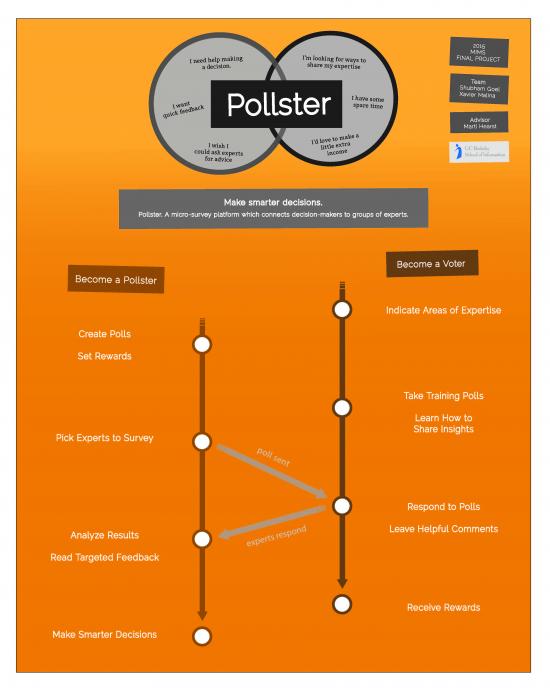