Information management has become an increasingly important part of humanitarian response to disasters. Within the humanitarian community, an increased focus on coordination and collaboration has been accompanied by a shift away from isolated information systems toward an emphasis on information sharing. This transition has at times been a rocky one, and many organizations are still struggling with questions of what information to share when, how, and with whom.

Situation reports, or "sitreps," are traditionally operational documents, used internally by NGOs, UN agencies, and other humanitarian actors to share information between field offices and headquarters about the situation on the ground. The public sitrep produced by the UN Office for the Coordination of Humanitarian Affairs, however, is a relatively new kind of information product in the humanitarian space. Drawn together from information provided by many other agencies and released publicly to a wide audience, the OCHA sitrep represents an open access system, a service both by and for the humanitarian community as a whole.

OCHA has had difficulty in defining the purpose and goals of its public sitrep, and this confusion has been reflected in tensions and inefficiencies in the document and the process used to produce it. For the past year, I and I School Ph.D. students Elisa Oreglia and Megan Finn have been collaborating with OCHA's Information Management Branch to research the current practices and perceptions around sitreps and information sharing within the organization. During a trip to OCHA's New York office in March 2008, follow-up trips to offices in Geneva and Nairobi, and numerous phone conversations, we have conducted semi-structured interviews and roundtable discussions with over 100 OCHA staff members and stakeholders in other organizations. The first phase of this work culminated in Elisa Oreglia and John Ward's MIMS final project in 2008, which included a report of our research and recommendations for OCHA. We also presented the results of our research at an all-day workshop at OCHA headquarters in New York in early October 2008.

The goal of my MIMS final project is to synthesize the research we have done to date into a publication-quality paper. Our research suggests that, as a common information service, the OCHA sitrep plays a very different role from the operational sitreps commonly used by NGOs and UN agencies. Drawing on our interviews and a comprehensive review of the academic literature on information sharing in humanitarian response, my report will explore the ramifications of this new role and suggest potential challenges and areas for improvement that could help to guide the design of the technical and organizational information systems that support the situation reporting process. This research has implications not just for the OCHA sitrep, but for other information systems being developed in the humanitarian space. 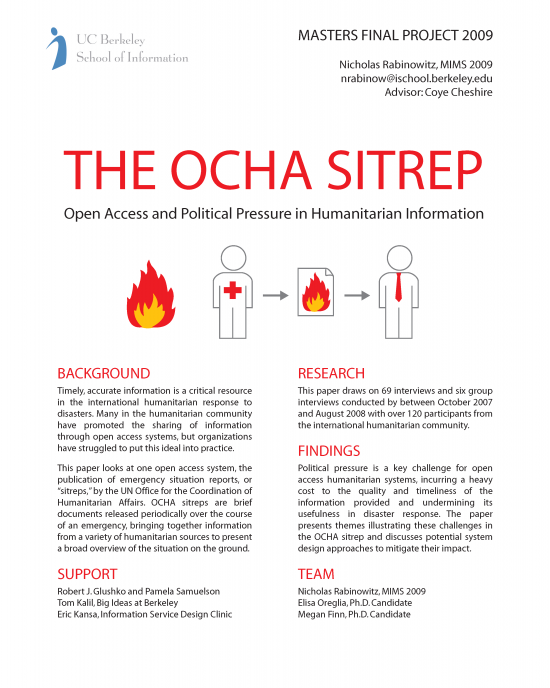