Hodges became a lecturer at the I School in the summer of 1970 while she was still a doctoral student in the library school. She taught a range of courses related to the organization of information, cataloging, and information retrieval. She also served as assistant dean, acting dean, and assistant professor until the early 1980s. Her doctoral research was an inquiry into the usefulness of citation indexes based on in-depth interviews with diverse scholars.

“She was a smart, outgoing, forceful, take-charge, no-nonsense person,” remembered Professor Emeritus Michael Buckland. “She was a lively presence for students during her period as an instructor in the School.”

Theodora Jane Long Hodges, ("Teddy"), was born May 8th, 1922, in Springfield, Massachusetts, to John Franklin Long and Amelia Agnes Hall Long. She died peacefully on June 19, 2022 in her home in Berkeley, California, shortly after her hundredth birthday.

Teddy was a respected academic and the matriarch of a large family.  She was married to Joseph Lawson Hodges, Jr., a professor of Statistics at the University of California at Berkeley. She is survived by five children: Grace Eleanor ("Lennie"), Nancy, Joseph, John, and William Alexander "Sandy" who live in California, Idaho, and Arizona. Her eleven grandchildren and sixteen great grandchildren live in California, New York, and British Columbia. She is also survived by her sister Helen who lives in Massachusetts, and to whom she remained close throughout her life.  Their youngest sister Nancy was lost to cancer in her fifties, a great loss to Teddy and to the whole family...

As the children grew older, she took classes at UC Berkeley, earning a PhD in Library Science. She went on to teach classes in indexing and cataloging, and served as Assistant Dean of the library school.  She co-authored and edited many books, and did the index for others, including one by the philosopher Susan Sanger. 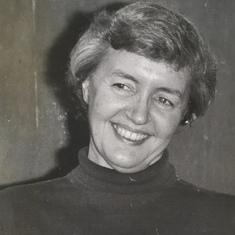