Cristina Campbell (MLIS ’77) and Tim DeWolf (MLS ’80) first crossed paths while they were both working in the campus library system. The couple, both retired after careers in highly specialized libraries, say that one thing that strikes them is how access to information has evolved. No longer do you have to wait for a printed source that might publish quarterly, or even yearly. “I appreciate every day what I can do myself with just a laptop,” Cristina says.

The School of Information (formerly the School of Library and Information Studies, 1976-1993) alumni were married in 1994. In 2019 they established a fund to support I School doctoral students.

When Cristina applied to library school she had a degree in Spanish from Mills College and was working as the manager of the Spanish literature department of an import book company in San Francisco. “I loved the notion of putting people together with what they needed. A friend suggested that I think about becoming a librarian,” she said.

At the time she had a vague notion she’d become a bilingual librarian in a public library. “I had a totally different idea of what I’d do,” Cristina said.

She has happy memories of South Hall and the community she found there and credits Emeritus Professor Mike Cooper with helping to connect her with opportunities. “I was his research assistant,” she said. “Mike studied systems analysis, and I’d run his punch cards up to Evans Hall and run the programs, which were in FORTRAN in those days,” she laughed.

Her first library role (as an archivist with the Institute of Human Development) was a one-year position Cooper referred her for. A few years later, she said, one of his doctoral students was leaving her job at the School of Public Health. “He lined up an interview for me,” she said, “and I wound up getting sucked into science.”

She went on to work at the UC Berkeley Public Health Library for twenty years, the last three of them as the Head of the Public Health Library. She found the work stimulating and rewarding; at the time, the Library provided research materials for the California State Department of Health. “We were doing hands-on stuff for people who would then be on the news the next night, talking about toxic sludge that was dumped in the Sacramento River or something, and we’d provided all the research provided on what the chemicals were and their toxicological profiles, etc.”

Before she officially retired in 2006, her last role was at the California Digital Library, managing the Melvyl catalog transition to a new software platform.

Meanwhile, Tim, who majored in English as a Berkeley undergrad, spent three years in the library as a work-study student. When he graduated and began to search for jobs, he decided to apply for a position in the circulation department of Doe Library. He worked his way up until he realized that without a graduate degree, he wouldn’t be able to go far in the library world; so he enrolled in the Master of Library Science program at what is now the School of Information.

A stint at the Earth Sciences library on campus led to a job as a special librarian with a multinational mining, metals, and petroleum company for fourteen years until he closed out his career at the Federal Reserve in San Francisco, where among other things, he migrated a cut and paste, daily clipping service for economists to a digital platform, gave tours of the Fed, and helped to set up Janet Yellen’s network. He says that his last year with the Fed (2010) was spent disposing of two-thirds of their book collection: with the advent of the internet organizations no longer needed large libraries on site.

Tim echoes Cristina’s pleasure in connecting people with resources and said one of the advantages of working in libraries, particularly specialized libraries, like the ones the couple spent their careers in, is that you’re always learning. “Maybe your learning is going to be a mile wide and an inch deep,” he said, “but you’re still engaged with the subject material.”

Although no longer connecting people with information and knowledge in a professional capacity, the two are big believers in education and community service for social good, and their histories of volunteerism attest to this. Cristina has been a native plant propagator with the UC Botanical garden since 2006. Tim volunteered for five years in a 5th grade classroom and the music program at John Muir School in Berkeley, and spent a few years as a writing coach at a Berkeley middle school. He’s played guitar for Story Time at two branches of the Berkeley public library for the past eight years (although these days he’s playing his sessions on zoom). They both volunteer their time with the Garber Park Stewards in Berkeley and do other conservation work, in addition to participating in two different book clubs, one of which, of course, is made up of former library colleagues.

“They’re the same sort of people doing the work: people who are interested in trying to make a difference in the world by getting information, massaging it, and putting it together in a new way.”
— Tim DeWolf

They have fond memories of South Hall and recognize that today’s I School students, while steeped in technology that seems light-years from their paper and pencil past, are not so different from their Library School forbearers.

“I mean, it’s certainly different — the types of projects I School students are working on today doesn’t have much to do with what we studied in the 70s and 80s,” Tim said. “But, they’re the same sort of people doing the work: people who are interested in trying to make a difference in the world by getting information, massaging it, and putting it together in a new way.”

They feel fortunate to have been able to establish the Tim DeWolf and Cristina Campbell Doctoral Student Support Fund in 2019, and chose to support the I School students because they felt that the I School’s unique cross-pollination of disciplines allows for, as Tim said, “brilliant ideas.” I School Ph.D. students, they said, are looking for solutions to improve people’s lives. “And that’s an educational path we’re more than happy to support,” Cristina said.

Sekhar and Rajashree Sarukkai have established the Sarukkai Social Impact Award, which will recognize I School master’s degree capstone or final projects with the greatest potential for social impact.

A trio of I School founders are giving back to Berkeley and inviting others to join them in supporting new generations of “I School Innovators.”

Over 20 Years of Doers and Thinkers: School of Information Ph.D.s

Twenty years ago, the School of Information launched its doctoral program. Many alumni, like Bob Bell (Ph.D. ’15), are in public interest tech. 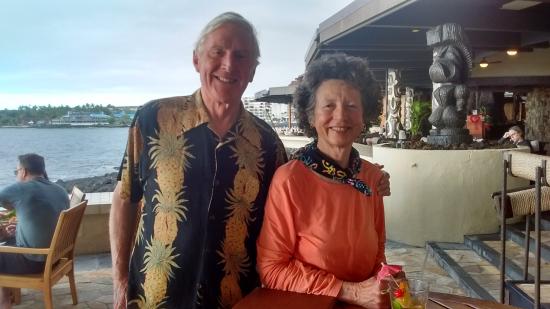 Tim and Cristina (Courtesy of the couple) 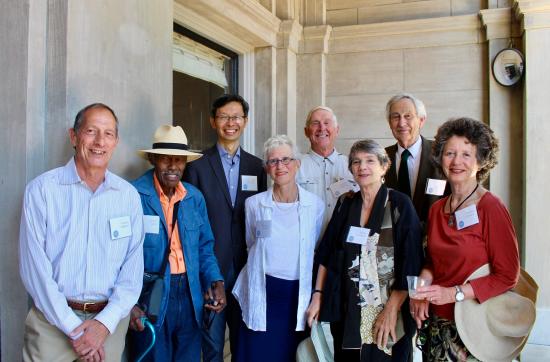 Cristina (far right), and Tim (back row, center) with other Library alumni at an I School celebration in 2019 (School of Information photo by Caitlin Appert-Nguyen)