The January 2020 School of Information Commencement looked to the future: we conferred a new degree for the first time, introduced a new Dean, and welcomed a first-time graduation speaker. At the same time, the ceremony reinforced the I School’s interdisciplinary history and inclusive culture, with speakers emphasizing empathy for technologists, community in cybersecurity, and a philosophical approach to data science.

The ceremony marked many firsts. 80 of the 167 total graduates from the Summer and Fall 2019 classes walked the stage at Hertz Hall, a first for each of them as newly minted master’s of information and data science, and information and cybersecurity. The graduates included our inaugural cohort of Master of Information and Cybersecurity (MICS) students, who became the first MICS alumni. It was our first graduation ceremony as a part of the Division of Data Science and Information, and on her first day on campus as Dean of the I School and Associate Provost of the Division, Professor Jennifer Chayes presided over the ceremony. 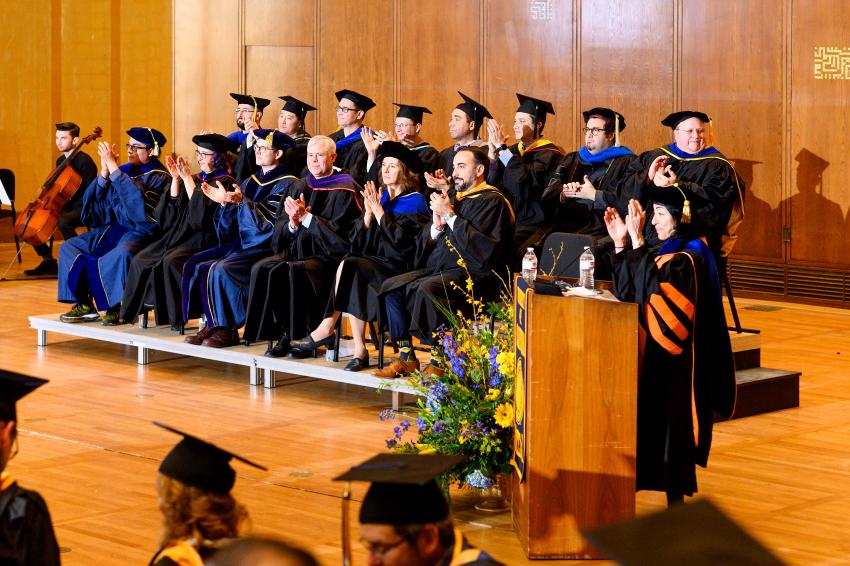 Stamos initially confused the audience with a generic (but nevertheless inspiring) opening statement that seemed to be directed at the wrong graduating class — which he quickly shared was generated by machine learning: “This is my first commencement speech, and my nervousness in addressing you today led to some pretty serious writer’s block . . . so, I did what any self-respecting techie would do in this situation: I threw some machine learning at the problem.”

But Stamos went on to inspire the graduates with a thoughtful (and original) speech on the true enemies of the technology world, explaining how our new alumni were in a unique position to defeat those enemies and make the world a safer and more secure place for the most vulnerable.

“The real enemies in the technology world are arrogance, complacency, and a lack of empathy for those we are supposed to protect.”
— Alex Stamos

“We need to be careful to not let our adversaries distract us from our enemies," said Stamos. “These words are not synonyms. Our adversaries are people. People who come and go depending on our job, their job, what’s happening in the world to drive certain conflicts and what products we have shipped. Our enemies, on the other hand, are the things that hold us back from doing better. And the real enemies in the technology world are arrogance, complacency, and a lack of empathy for those we are supposed to protect.”

Stamos warned the graduates that they must be aware of the corporate cultures they may find themselves in, resist the “minimum viable product” philosophy and the status quo, and aspire to empathize as universally as possible with others across differences. “Deciding to get on a massive ship with a tiny oar in your hand and telling yourself that maybe you can help it avoid the iceberg is terrifying... But if you choose a direction where your work might have great impact, if you can have the self-knowledge to understand why you and your colleagues are failing and if you have the courage to confront people who you otherwise like and respect, then you have a chance at vanquishing your enemies.” 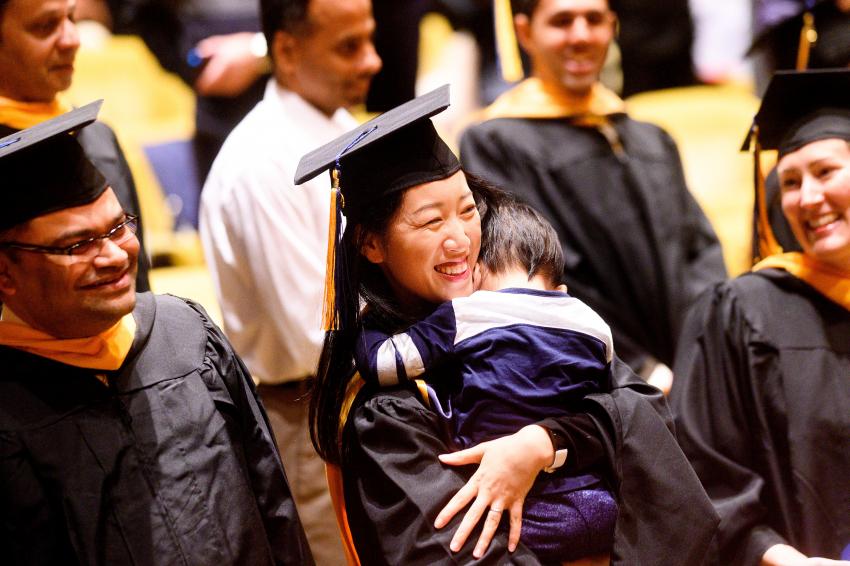 “Throughout this ceremony, you’ll notice a tenacious focus on things like diversity, freedom, respect, ethos and moral values.”
— Spyros Garyfallos

MIDS student speaker Spyros Garyfallos also touched on culture, emphasizing that the I School culture was one of the most important parts of his degree program and helped him understand data science as a philosophical discipline engaged with big questions about values and social structure. He charged his fellow master of information and data science graduates to understand how their work can break down — or reinforce — bias: “Bias is systemic and . . . through us, Data Scientists, propagates to anything we touch. As a scientist, this was a radical realization: To build something good, you need to have the right culture.”

“Everybody will admit that UC Berkeley is one of the best schools in the world,” Garyfallos continued. “Have you ever wondered why? I think I know; it is the culture. Throughout this ceremony, you’ll notice a tenacious focus on things like diversity, freedom, respect, ethos and moral values. And the reason is that this is the only way you can reduce bias.”

MICS student speaker Daren Childers highlighted the individual contributions of each of his classmates and stressed the collaborative nature of the program and of cybersecurity as a field. Childers, the cohort representative for the inaugural class of MICS students, helped create a strong and cohesive culture among his classmates, positively influencing the program as a whole.

“We bear the responsibility of fighting for freedom in vast new ways.”
— Daren Childers

“We bear the responsibility of fighting for freedom in vast new ways,” Childers told his classmates. “We have learned that in a field so broad and in the face of a chasm so deep, we need each other, across all disciplines, to influence the behavior of one programmer, to secure the data of one patient, to influence the policy of one government, to hide the identity of one user or to overcome the next threat, the one after that and the one after that.” 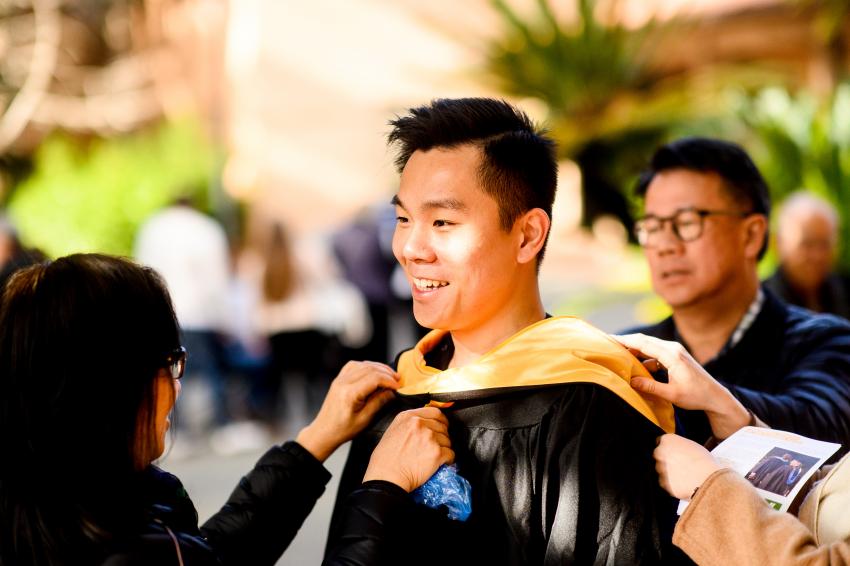 As our new alumni take what they have learned at the I School and apply it to their work in a range of industries and companies, they will bring with them the I School’s teaching on reducing bias, recognizing the value of collaboration, and working toward empathy with people different from themselves. 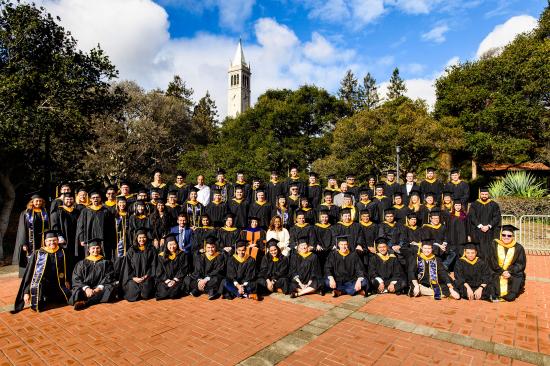 MIDS and MICS graduates from the Class of 2019. All photos by Noah Berger. 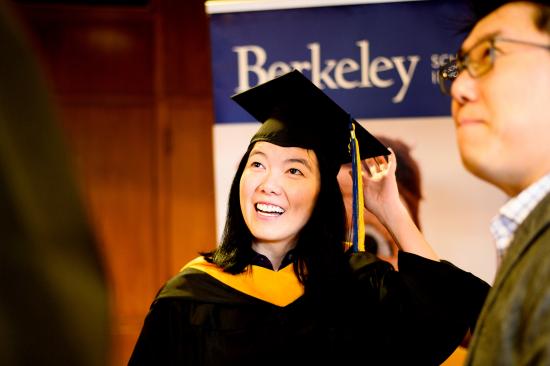 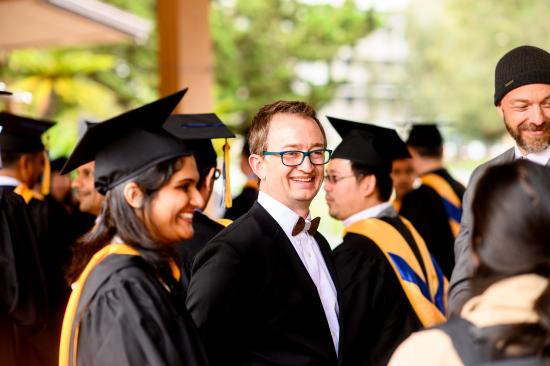 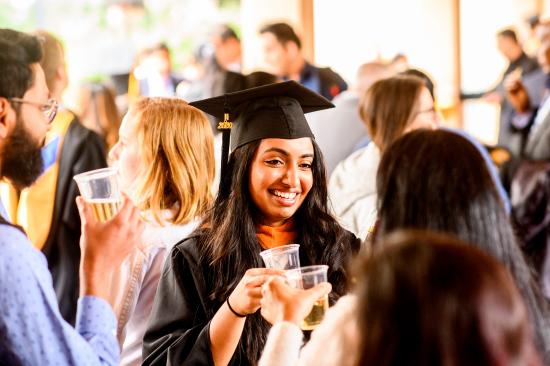 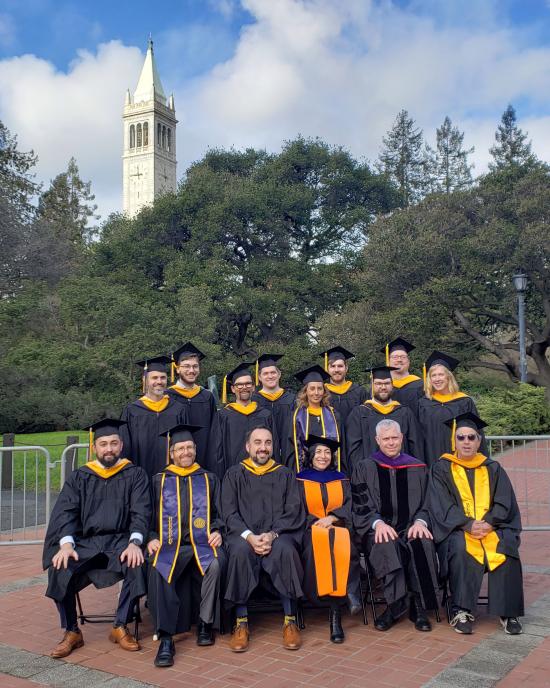