Dean Saxenian Awarded the Berkeley Citation As She Steps Down

On June 30, 2019, her final day as Dean of the School of Information, Anno Saxenian was awarded the Berkeley Citation in a surprise announcement at a celebration of tribute and transition. The award is among the highest honors the campus bestows on its community and is awarded to individuals whose contributions and achievements go beyond the call of duty and exceed the standards of excellence in their fields.

Chancellor Carol Christ hosted the celebration at University House to pay tribute to Saxenian’s tenure as Dean and look forward to the transition of leadership to Professor John Chuang as Head of School. The Chancellor, Professor Steven Weber, MIMS alumnus and entrepreneur Prayag Narula, and Professor John Chuang all paid tribute to Dean Saxenian’s enormous contributions as dean; then, in a surprise announcement, the Chancellor presented Saxenian with the award.

The Dean and her family were astonished and moved by the recognition, and the crowd of alumni, friends of the school, staff, faculty and university leadership responded with sincere applause.

“It would be difficult to overstate the influence that Anno has had on the school,” said Chancellor Christ. “She has shaped its offerings, hired many of its outstanding scholars, codified its purpose, expanded its influence, and, in all, ensured that it is a top-caliber, forward-looking institution that advances knowledge and practice wherever humans interact with information and technology.”

A courageous and visionary leader

Dean Saxenian was nominated for the award by colleagues at the School of Information and from across campus who wrote letters supporting her more than 15 years as a visionary leader with an unwavering commitment to excellence. Recurring themes among her many supporters included her commitment to growing and diversifying the faculty and student body, her extraordinary reputation as a scholar, her courage, and her collegiality.

Saxenian is the second dean of the I School, following founding dean Hal Varian. She has served as dean for more than half the I School’s history and led the school through a period of tremendous growth.

Saxenian grew the school from fewer than 100 students to over 700, more than doubling the size of the faculty and establishing its first faculty chair, The Hal R. Varian Chair in Information Economics. She doubled the size of the Ph.D. program and had the vision to create a  Master of Information and Data Science degree program, well before most had even heard the term “data science,” much less recognized it as an academic discipline.

As one of the first women deans on the Berkeley campus, Saxenian has been a role model and has championed numerous efforts to increase diversity and representation in technology.

Steve Weber, the faculty director for the CLTC, paid tribute to Saxenian’s humility and courage as a scholar, and foresight in championing new areas of research, particularly in her early recognition of the then-nascent economy and business of the Silicon Valley

Alumnus Prayag Narula, the co-founder of the company Lead Genius, said that the I School shaped his career and that for many reasons, he is where he is now because of Anno. He also announced the launch of the I School Innovators fund: “We hope that by modeling generosity to budding I School entrepreneurs,” Narula said, “we will launch not only enterprises with the social consciousness that reflects the caring ethos of this campus community but a virtuous cycle of giving back and paying forward the great benefit of a Berkeley education, and the unique and valuable nature of an I School education.”

John Chuang shared that this day marked exactly 20 years since he was hired as I School faculty by Hal Varian, and that he was humbled to follow in the footsteps of two great leaders. “As the saying goes, Anno leaves big shoes to fill,” Chuang shared, “but her example and the promise of our students like Prayag, his fellow entrepreneurial alumni, and with our dedicated faculty and alumni community — I am deeply inspired.”

Upon receiving the award Dean Saxenian expressed her deep appreciation to everyone in the room and her optimism for the future of the school.

“I’d like to toast to the future and to the illuminating knowledge, ideas, and innovation across our community,” said Saxenian raising her glass. “So in the words of Berkeley’s motto — let there be light — Fiat Lux!”

Dean Saxenian to Step Down

Dean Saxenian will step down and return to a full-time faculty position next summer after the conclusion of her third term.

Announcing the creation of a new interdisciplinary Division of Data Science and Information. 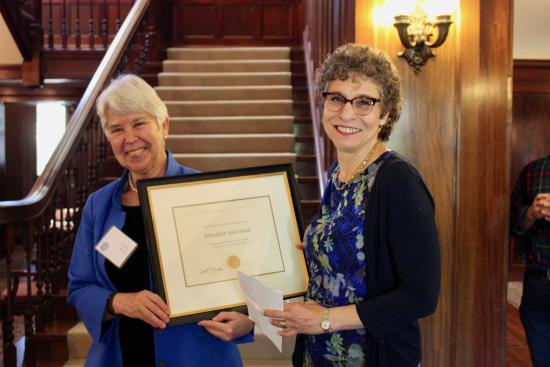 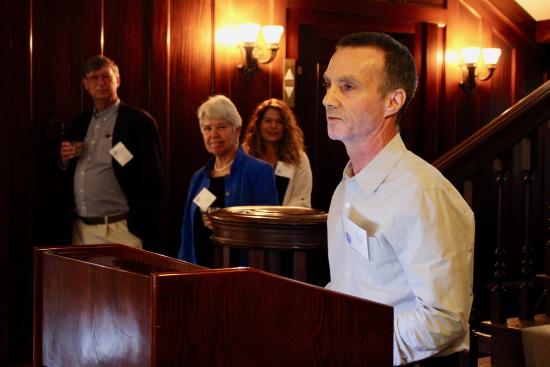 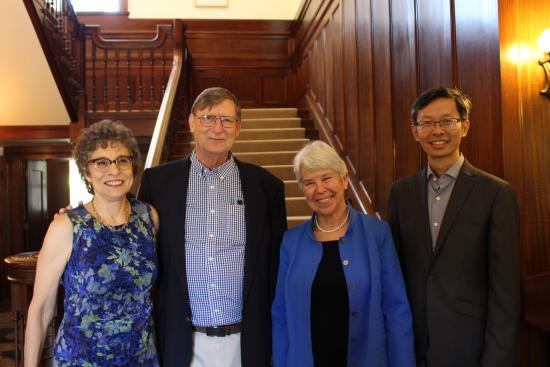 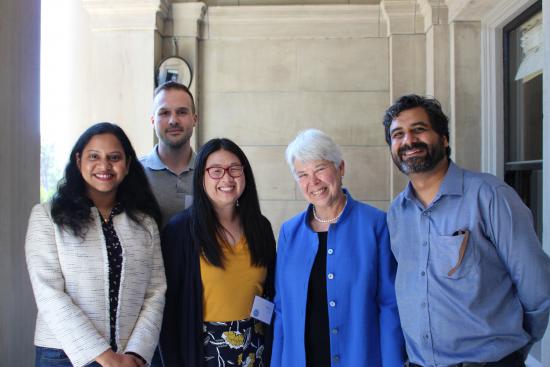 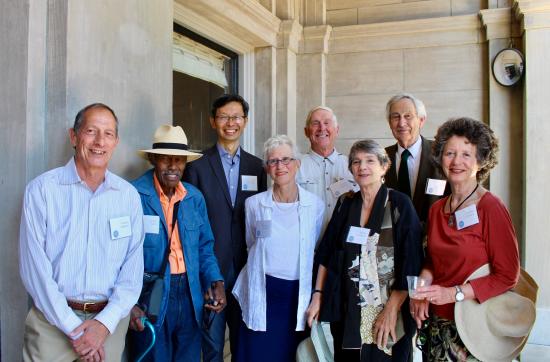 Alumni from the Library School, the precursor to the I School, were among the guests at the celebration. Pictured: Vernon Ambrose, Curtis Smith, John Chuang, Beverlee French, Timothy DeWolf, Dianne Ellsworth, Michael Buckland, and Cristina Campbell.