Imagine if the power of Pokémon Go could be harnessed to tackle issues of community livability, justice, and sustainability.

CitizenAR: Augmented Reality for Livable Cities is a hackathon and tech carnival. The event is presented by Tech in the Tenderloin, a non-profit initiative in partnership with The Salvation Army’s Kroc Center, that connects low-opportunity youth and families with high-opportunity technology. Teams had approximately eight hours to work on their hack (much less than the traditional 24-48), and were encouraged to view the hackathon as a start to something larger, rather than a one-off event. They were challenged to innovate ways of engaging city-dwellers in making their environment more sustainable, just and livable using augmented reality in fun, social and gaming ways.

The selection process to participate was highly selective and involved a comprehensive application. Ten cross-disciplinary university teams were selected to compete, and included groups from across the country, including Carnegie Mellon University and the University of Pennsylvania. Ultimately there were four winning teams: the UC Berkeley School of Information team, and teams from the UC Berkeley Haas School of Business, the Academy of the Art University, and UC Davis.

The I School team was drawn to the competition in part for the exposure the augmented reality industry, but also for the opportunity to learn more about and support the history, culture, and art of the Tenderloin district. Through user research, the group found that in the Tenderloin community organization is strong, there is a need for accountability in reporting issues, there is a rich history of art and culture, and success would be found through empowering the community to drive content. They determined that Tenderloin youth and community leaders would be an ideal target audience and attempted to create cross-community collaboration and organization in digital space.

“Our team brings a deep appreciation of social science and comprehensive technical expertise. We believe that we truly can make a better world as long as we keep hacking for social impact.”
–Berkeley I School team

The team’s project “ARTL” (augmented reality Tenderloin) empowered the community organizers and youth of the Tenderloin neighborhood of San Francisco ("TL") to show their pride for their community through a mobile application. ARTL allows for users to report (both problems and positive events) within the application, and follow up with the right organization for accountability. It also created opportunities for participatory experiences, such as standing together to create a mural within the app on the sides of buildings, or gaining points by participating in community events like basketball. The team also featured historical, artistic, and cultural elements of the neighborhood in the application and created an avatar to encourage students to continue to use it in their lives.

Participants were offered three prompts to guide their projects, and the I School team used the first “improve the stewardship of the streets of the Tenderloin.” The team was able to bring their previous experience and knowledge gained through the MIMS curriculum inform the project:

“I really valued our interdisciplinary team and that we were the only team that was truly able to tackle the problem from the client's perspective… Everyone brought their previous expertise to the team and were able to put to practice what they're learning in classes like User Interface Design. We practiced our human-centered design research with the community in the Tenderloin in order to truly understand the root of the problem, and we applied our findings in a way that empowers the citizens of TL to generate their own content and tell their own story.”
–Michelle Carney (MIMS 2018)

The I School team won the client’s choice award, a clear indicator that their project truly spoke to the client’s needs and they were able to design a positive and useful solution that empowered the citizens of the TL. View project presentation.

The hackathon challenged participants to come up with creative solutions for a wide variety of mobility and transportation problems, to promote equity and opportunity for some of society’s most vulnerable populations.

Users can use the app to report issues for points.

Users can interact with peers and earn points through participating in community events, like basketball. 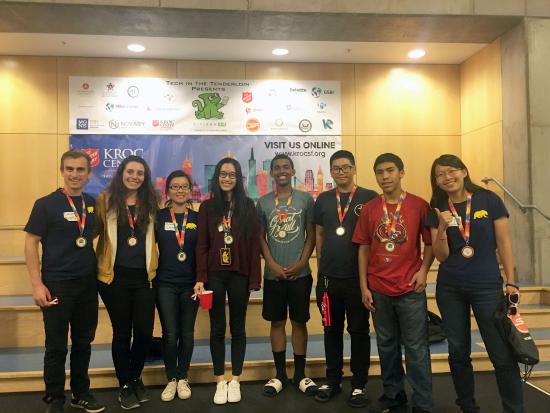 The I School team with their community clients, youth of the Tenderloin