Being the Machine: A Student's Journey to Becoming a Human 3D Printer

Machines increasingly act like humans, doing jobs we used to do ourselves. But what happens when we challenge a human to perform a machine’s tasks? A new project by doctoral student Laura Devendorf explores just such a role reversal, revealing some unexpected insights into the creative process how people interact with machines.

Now a fourth-year Ph.D. student at the School of Information, Laura Devendorf is an artist, designer, and computer scientist with degrees in both computer science and visual art. She works with associate professor Kimiko Ryokai to explore the challenge of designing machines to support human creativity.

Devendorf spent last summer as an Artist in Residence at Autodesk, exploring the hybrid space between digital and physical. “How can one have the same experience of connectedness and intentionality when we make something in the digital space that we do in physical space?” she asked. “How can we design interfaces to support that?”

When creating digital tools for creativity, our instinct is to take something that works in the physical realm and move it directly to the digital realm, she explained. But that doesn’t always work; computing applications often fail to support the exploration, experimentation, and playfulness of the physical design process, Devendorf says.

In 3D printing, the machine is subjugated to the human; the human issues the commands, and the machine obeys. But Devendorf wondered what would happen if you turned that around and let the computer control the human.

Devendorf was initially excited by the possibilities of digital fabrication and 3D printing, but as she got more experience with 3D printing, “there was something that just left me underwhelmed,” she said. “For my own expressive or creative work, something was missing.”

After wrestling with the disconnectedness of digital fabrication, Devendorf decided to flip the whole process on its head.

In 3D printing, the machine is subjugated to the human; the human issues the commands, and the machine obeys. But Devendorf wondered what would happen if you turned that around and let the computer control the human.

The result was Redeform, a system that guides a human in building objects by following the instructions typically given to a 3D printer. As a functional system for making, it allows for the construction of digital models from everyday materials, in public places, and at scales that are difficult for 3D printers to support.

“We hope this project will complicate human-machine binaries, serve as a site for reflection on values in digital fabrication design, and prompt discussion about possible futures of 3D printing,” said Devendorf.

She was inspired by the tradition of “mechanical performance” in 20th-century art, including the Italian Futurists, performance artists like Oskar Schlemmer, and composers like John Cage — all artists who explored humans’ relationship with machines.

The first step was to understand how 3D printers work.

In 3D printing, the computer stores a digital model specifying the exact shape of the object to be fabricated — a sort of virtual blueprint. The computer deconstructs that model into a series of horizontal slices; it sends the printer exact specifications for building the object layer-by-layer. The printer extrudes some sort of plastic, rubber, or polyurethane in the exact size and shape of each layer, building each layer on top of the previous one.

The printer instructions are typically G-code, a numerical control programming language used in computer-aided manufacturing; a G-code file tells the 3D printer exactly where to move, on what path, and how fast, to create the object.

Devendorf had to figure out a way to communicate the step-by-step G-code instructions to the human who will be playing the role of the machine.

Using a pair of Servo motors and a small laser, Devendorf built a laser guide that “draws” in an X-Y plane, based on the G-code specifications. Intially, she tested the laser guide by simply drawing each layer with a pen on paper. Devendorf also developed a custom software suite to visualize a G-code file and then send the proper instructions to the laser guide. “It’s essentially a 3D connect-the dots. When the laser comes on, you put your pen down. When it moves, you follow it with your pen,” she said. “You kind of have to trust it.”

After calibrating the laser guide, the next challenge was actually following the computer’s instructions and constructing three-dimensional models.

Devendorf experimented with a variety of shapes and materials — she built a model hand out of layers of pipe-cleaners, a flower vase out of other flowers, and a toy gun out of Good & Plenty candies. But it wasn't all success stories; some of her notable failures included a kitten made of Cheez Whiz, two Möbius rings (made of gumdrops and Good & Plenties), and a bunny made of hot glue and glitter. Not only was the bunny a shapeless mess, but “if you touch it, you’ll have glitter on you for the rest of your life,” she warned.

What the Materials Want

Devendorf’s  failures highlighted the importance of the materials themselves in the creative process. The act of making can be thought of as a dialog between the creator and the materials. “You think you have this dominance over the world, but then discover that these things have material properties and want to move in particular ways,” she observed. Different materials seemed more or less amenable to being used in different ways. Pipe cleaners were most suited to following a linear path, and Good & Plenty candies worked well with the hot glue gun, Devendorf found, but even they resisted certain types of construction.

Normally the materials used in digital fabrication are completely passive, engineered to exactly obey the machine’s instructions — what anthropologist Tim Ingold calls a “hylomorphic” view of making. But by allowing the use of non-traditional materials, Devendorf’s Redeform system support a non-hylomorphic experience, where the creative process is a “correspondence” — a dialog or negotiation — between the desires of the maker and the desires of the materials.

Redeform places the human in the middle of that dialog, following the instructions of the machine, but also sensitive to the responses and desires of the materials. “Working with one’s hands allows for more visceral and direct interaction with a wide variety of materials, thus leading to more personal experiences and insights,” said Devendorf. “The goal of our machine is to guide human hands to reach this experience.”

“Working with one’s hands allows for visceral and direct interaction with a wide variety of materials. The goal of our machine is to guide human hands to reach this experience.”
–Laura Devendorf

In order to observe how people engage with the Redeform system, Devendorf invited fourteen people to experiment with the tool, using the materials and models of their choice. The participants’ differing experiences depended on how they felt about their own control (or lack of control), how much they were willing to trust the machine, and how they saw their own role in the creative process.

Devendorf will be demonstrating Redeform on January 22 at Autodesk’s workshop on Pier 9, San Francisco, as part of an art showcase from the Autodesk Artist-In-Residence Program. She has also been invited to present February 7 at the Data Clay Symposium, a conference organized by California College for the Arts in conjunction with the Data Clay exhibit at the San Francisco Museum of Craft and Design. And Devendorf and Ryokai will be presenting their research on Redeform at CHI 2015, the ACM conference on human-computer interaction, April 18–23 in Seoul, South Korea.

New Mobile App Turns Your Environment Into A Personalized Typeface
The mobile app “AnyType” lets people experiment with the creative process — and encourages them to see the world around them through a new lens. 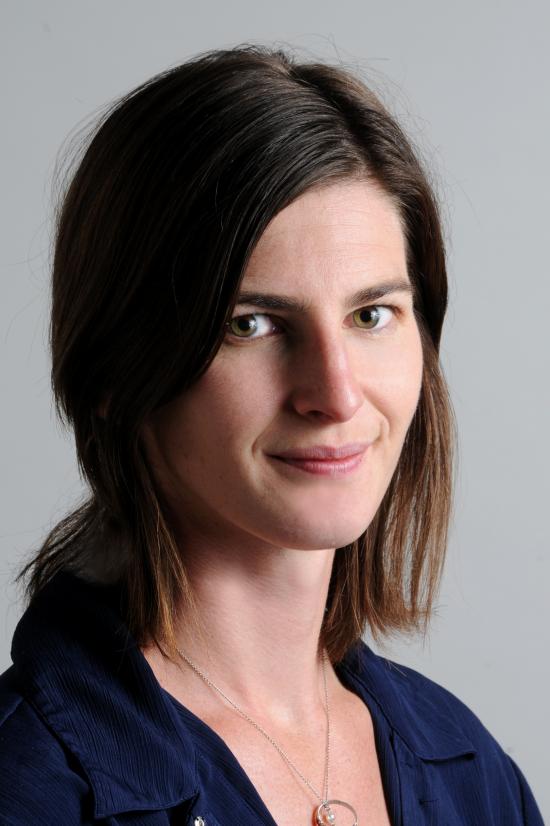 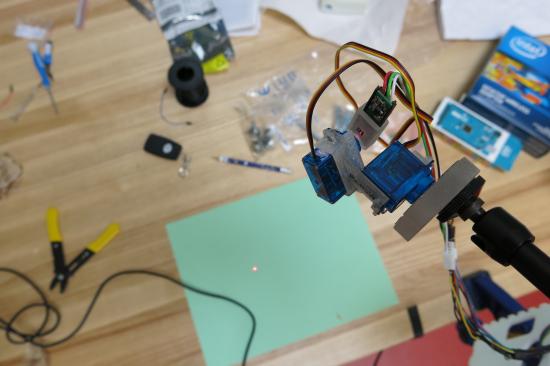 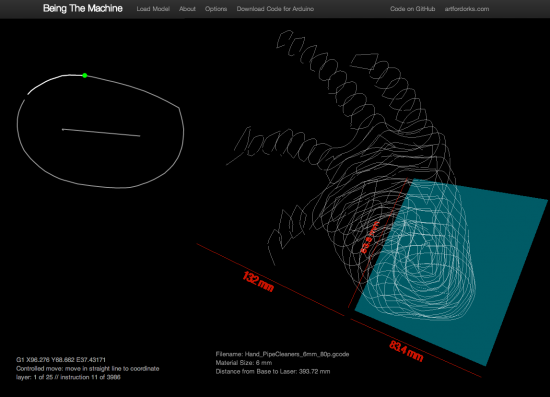 Devendorf developed custom software to visualize a G-code file and send instructions to the laser guide. 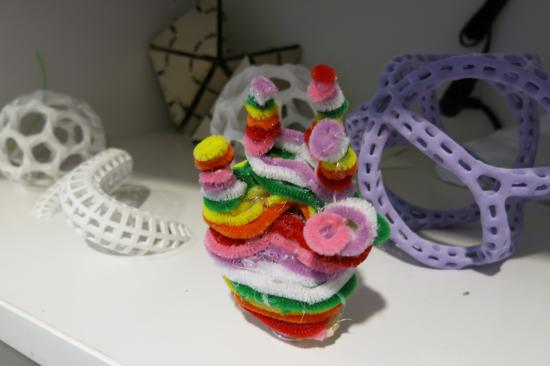 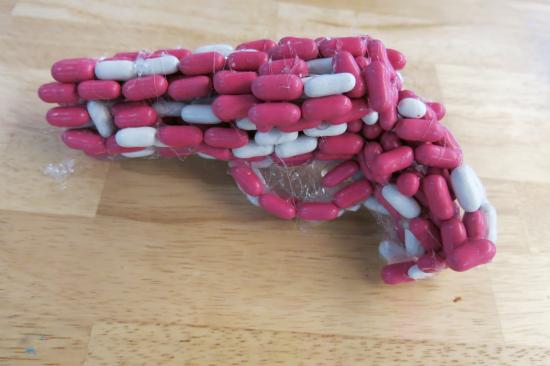 One project was a "3D-printed" toy gun, made of hot glue and Good & Plenty candies

Laura Devendorf presents her "Being the Machine" project to Autodesk

Being the Machine: 3D Printing By Hand

Being the Machine: 3D Printing By Hand