The New Jersey Chapter of ASIS&T honored Dr. Michael Buckland, professor emeritus and former dean of the UC Berkeley School of Information, with its 2015 Distinguished Lecture Series Award. ASIS&T (the Association for Information Science and Technology) is the only professional association that bridges the gap between information science practice and research.

Prior to award reception, Dr. Buckland spent the day at Rutgers School of Communication and Information.  He met with faculty and enjoyed lunch with Ph.D. students.  It was a great opportunity for the students and the faculty to have informal discussions with Dr. Buckland.

The reception was attended by over 40 people that include ASIS&T members and non-members within and outside of SCI, including Dr. Claire McInerney, acting dean of the School of Communication & Information (SC&I) at Rutgers University.

Dean McInerney presented the prestigious Distinguished Lectureship award to Dr. Michael Buckland, and Dr. Buckland gave a brief talk on his experiences working in the field of LIS.  He provided both practical and theoretical contexts that influenced his perceptions and future expectations.

As a recipient of the Distinguished Lectureship Award, Dr. Buckland joins a group of long-time leaders in the field, including Dr. Eugene Garfield, Dr. Gerald Salton, and Dr. Tefko Saracevic.

Michael Buckland was born and educated in England. He studied history and librarianship and joined the University of Lancaster Library in 1965, where from 1967 to 1972 he worked in the Library Research Unit on studies of book usage and book availability. His Ph.D dissertation (Sheffield University, 1972) was published as Book Availability and the Library User (Pergamon, 1975).

In 1972 he moved to the United States as assistant director of libraries for technical services at Purdue University, before becoming dean of the UC Berkeley School of Library and Information Studies, 1976–84. From 1983 to 1987 he was assistant vice president for library plans and policies for the University of California system. He has been a visiting scholar in Austria and Australia, was president of the American Society for Information Science in 1998, and became emeritus professor in 2004. 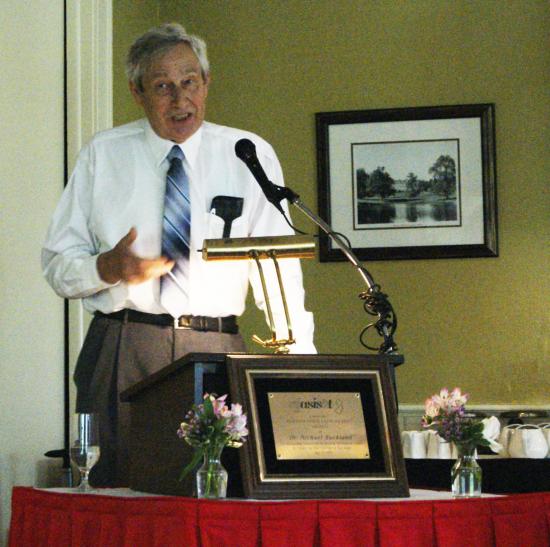