Experts Mine Questions of Big Data, Power, and Privacy

Introducing the first of four panels of experts at Tuesday’s daylong workshop on “Big Data: Values and Governance,” Deirdre Mulligan compared and contrasted today’s era of information overload with 1973, when Americans typed on IBM Selectrics and banked with human tellers.

Mulligan, an assistant professor in the UC Berkeley School of Information, called the 1970s “a time not unlike our own,” marked by “breathtaking revelations of government overreaching into private lives, secret data banks with questionable legal authority and at times illicit goals that caught the population off-guard,” as well as “a deep commitment to secrecy.”

“One of the things I find most interesting,” said Mulligan, a co-director of the Berkeley Center for Law and Technology, “is the fact that we are not only having these conversations, but that the administration has said we need to have these conversations about Big Data — about the way in which government uses information, the private sector uses information, the way in which information is crossing borders and boundaries — in a public setting.”

In the audience in Sutardja Dai Hall was John Podesta, a one-time chief of staff for President Clinton and current counselor to President Obama, for whom he is leading a review of Big Data technologies and their impacts on American life and values. The Berkeley workshop was the third and last in a series — following similar events at MIT and NYU — bringing together the worlds of government, business, the law, and academia for what Mulligan called “a frank and honest conversation about our values,” and about how to balance those values with the omnipresent, often invisible collection of data about every aspect of our lives.

His group, Podesta said, is not looking at intelligence gathering by the NSA, whose massive data-collection programs, revealed by Edward Snowden’s leaks to the Guardian and Washington Post, have prompted public outrage and moves from the White House to reform how so-called metadata is stored and accessed by intelligence agencies.

Tuesday’s workshop — hosted jointly by the White House Office of Science and Technology Policy, the School of Information, and Berkeley Law’s Center for Law and Technology — homed in on the tensions between technological innovation and such societal values as privacy, fairness, and the right of citizens to be kept apprised of what corporations and government entities know about them. Individuals may be willing to sacrifice some degree of privacy when it comes to medical records, for example, as long as there are sufficient controls over how that information is shared and used.

But will we feel the same way about data on our consumption habits compiled automatically by “smart refrigerators”? How do we gauge the risks and rewards of Big Data in different contexts, and how can we craft public policies that reflect our values without stifling technological progress?

It was a day that raised more questions than answers. That was due partly to the wide spectrum of perspectives brought to bear, from the federal government to the Electronic Frontier Foundation to LinkedIn and Microsoft. But it also derived from the speed at which technology itself is changing — a pace exponentially faster than that in 1986, when Congress passed ECPA, the federal Electronic Communications Privacy Act.

While “people were very prescient in 1986,” observed Nicole Ozer, technology and civil-liberties policy director for the ACLU of California, there was only so much they could foresee. Not only was that pre-Internet, she said, but “cellphones were the size of bricks, and Mark Zuckerberg was in diapers.”

Current efforts to update protections, the workshop made clear, are being undertaken in the face of some changes the Facebook founder himself probably can’t imagine, and others — such as the intelligence community’s access to metadata collected by companies like his, and stored by giant telecommunications service providers — he doesn’t have to.

As to whether transparency is an adequate solution to privacy concerns, Kenneth Bamberger, a Berkeley law professor and Mulligan’s co-director at the Center for Law and Technology, suggested that all transparency isn’t equal. There is “a kind of bureaucratic openness, a kind of formal transparency,” he said, “and a transparency that actually gives meaningful information to the public and to decision-makers.... In a way, transparencies have been regularized and bureaucratized in such a way that nobody’s actually looking at what’s going on under the hood.

“What we’re talking about here is power,” Bamberger said. “In a world of Big Data, where data is flowing back and forth at all times, from multiple different sources, and no one knows, often, exactly how it’s being used, these questions of power can’t be overcome by simply individual choices.”

“I think the problem of not having a definition of privacy is a real one,” said Fred Cate, a professor at the Indiana University Maurer School of Law. “We know what we’re talking about when we talk about murder, or when we talk about fraud. When it comes to privacy, we have no earthly idea.... You can’t legislate on that basis. You can’t say here’s a right that depends on who you ask.”

“I think it actually is about a restraint on power,” Cate said. “It’s saying there are certain things the government should not be able to do. It’s about the relationship of citizens to their government.”

Podesta, who didn’t take the stage for his keynote until after 5 pm, praised Mulligan “for the work she’s done for many, many years on this set of important issues,” and noted his own role, as a young aide to Sen. Pat Leahy, in crafting the 1980s-era Electronic Communications Privacy Act.

“The technologies, of course, and applications we’ve heard about today and in our previous workshops may be new, but the legal and policy questions that these technologies raise are quite old,” Podesta said. “Big Data requires us to ask ourselves, how do we embrace new technologies and the progress they bring to our society, while at the same time protecting our fundamental freedoms and values, like privacy, fairness, and self-determination?”

In the course of the White House review, his team, which includes high-ranking Obama deputies from a range of agencies, has met “with privacy advocates and technology companies, with academic researchers and advertisers, with law-enforcement agencies and civil-rights groups,” Podesta said. In addition, the administration is receiving input via a public-comment process and a survey on the White House website he said has garnered tens of thousands of responses.

He referred to Obama’s 2012 release of a “consumer privacy blueprint” and a “Consumer Privacy Bill of Rights,” which Podesta said “sets out principles that aim to protect user privacy without restricting the innovation potential of the Internet.”

The process, he said, is “casting a wide net” in “trying to understand how Big Data technologies have begun to transform government, commerce, and society, and as we examine the potential implications for our social and civic values.”

“In the midst of what some are calling a Big Data revolution,” said Podesta, “we’re taking this opportunity to consider the landscape, and to really interrogate whether our existing policies are prepared for what’s on the horizon technologically.” 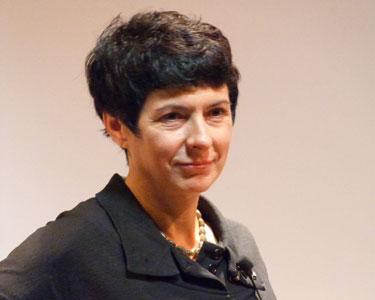 Deirdre Mulligan looks at how information is “crossing borders and boundaries.” 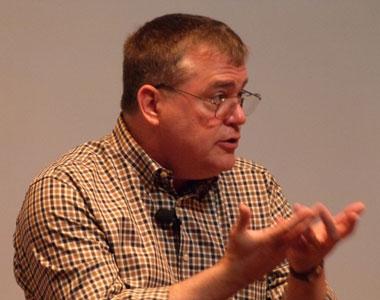 Fred Cate, a University of Indiana law professor, makes a point during the first of four panel discussions. 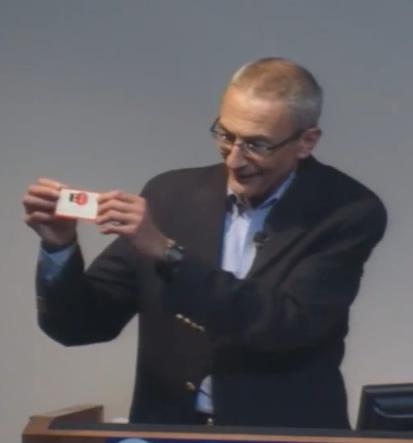 John Podesta shows off his EFF membership card, which shows that he was Member #33.

Panel II: Deep dive on new opportunities and challenges in health and education

Panel I: Values at stake, Values in tension: privacy and beyond

Big Data: Values and Governance - Panel I: Values at stake, Values in tension: privacy and beyond