Jeopardy! is an American TV quiz game show where contestants are given clues about general knowledge in the form of an answer which they must respond to with the correct corresponding question. Although the show debuted in 1964, our visualizations focus on the program’s most successful syndicated version, which began in 1984 with Alex Trebek as its host.

Jeopardy! has a grueling audition process. Applicants must take a challenging written exam, compete one-on-one interviews and successfully compete in mock games. Only a lucky 0.4% make it on to the show.

Of the contestants who do get on, fewer are women. The gender gap has long been known to exist on Jeopardy! According to Alex Trebek, the producers have been working over the years to attract more women to the show, which has been successful to an extent. However even with more women on the show, the percentage of winners continues to be less than the percentage of players.

Some people cite gender bias caused by a lack of females on the production staff. The executive producer and editorial producer who must approve all questions are both male. And currently only 2 out of 8 clue writers are female.

What makes someone a champion?

Each line on the visualization below is one of the top 50 contestants who have earned the most money on Jeopardy! Notice that there has never been a top performing female from the Southeast. Roll over the lines to see if you can find Ken Jennings dominating the pack!

Jeopardy! has three rounds: Jeopardy!, Double Jeopardy! and Final Jeopardy! Contestants collectively answer 30 questions in each round before they reach the Final Jeopardy! At this point, they must decide what percentage of their current earnings they want to wager in the final round. It presents them with an opportunity to double it or lose it.

The first step in our process was understanding and exploring the vast data source of 200,000+ clues, categories and answers. We accumulated 30 years of data about the show from j-archive.com, an amazing unofficial fan created site, and went through the process of sorting the data to segregate each player by their relative final position.

Here's some questions to investigate:

The number of episodes that have been captured on J-Archive has drastially changed over time, with a major upward spike occuring in 1996. It's possible that was the year fans began seriously collecting episode data and information before that was captured from VCR recordings. Also, the amount of money that contestants won on the show increases signficantly in 2000 when the Jeopardy! doubled its question values to keep up with inflation and other game shows. Due to the lack of data from earlier years, we found graphs visualizing data on an annual basis to be a bit misleading. To compensate for this, we decided to allow the user to navigate by season (each a year long). By clicking on an episode in the season, one can see how the game played out.

Here's some questions to investigate:

The scatter plot provides a season-level view into how contestants place their wagers. Select a view from the drop down menu: actual wager or wager as a percentage of earnings.

Because the maximum amount one wagers depends their current earnings, first place contestants typically wager more than those in second place, who tend to wager more than third place contestants. However, as a percentage of their earnings, the pattern is the opposite. In the rare cases where players have an unassailable lead, they are more circumspect, while players in third place almost always wager their full earnings since they have nothing to lose.

To bring it all together, the bipartite visualization shows the movement of players between different positions before and after the Final Jeopardy! round. While contestants typically maintain their positions, third place contestants are more likely than those in second place to move up. 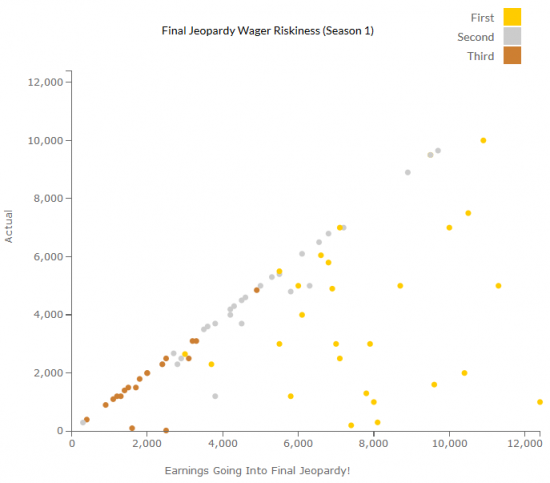 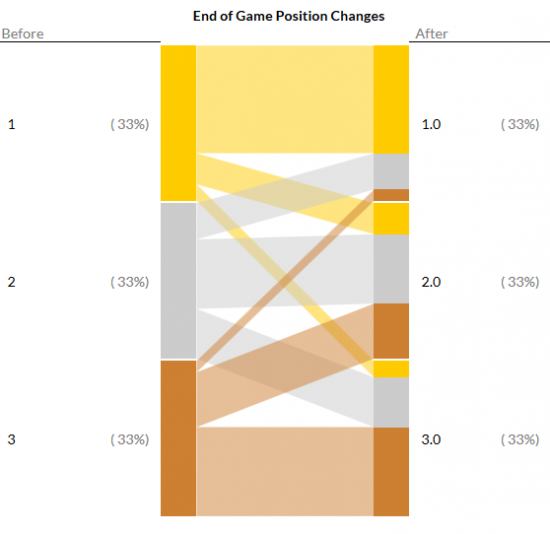