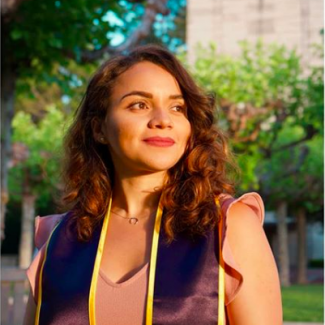 Silvia started her academic journey in Tijuana, Mexico, and in the 11th grade, she began attending school in San Diego, California. After graduating from high school, she continued on to community college, where she later transferred to UC Berkeley. In December of 2018 she graduated from the university with a degree in applied mathematics and an emphasis in data science. Soon after receiving her degree, she participated in the Science Undergraduate Laboratory Internships (SULI) program under the supervision of Daniela Ushizima in the Data Analytics and Visualization group within the Computational Research Division at Berkeley Lab. Shorly after, Silvia was admitted to UC Berkeley's 5th Year Master's in Information and Data Science where she continued working with Daniela Ushizima in the development of machine learning algorithms for scientific imagery. At the end of the 5th year MIDS program, Silvia along with her Capstone team (Emma Russon, Isa Chau, JJ Sahabu, and Chelsea Shu) developed the innovative award-winning 'Gredient' mobile application based on OCR and deep learning running on AWS.

Now as a Computer Systems Engineer under the supervision of Daniela Ushizima and James Sethian at the CAMERA research group in Berkeley Lab, she continues to focus on the processing of scientific 2D and 3D imagery along with the application of machine learning algorithms to detect and classify objects, material phases and cells. As a result of her projects, she has participated in the acceleration of scientific processes such as the identification of regions of interest in cervical microscopy, the analysis of faulty fiber structures for the improved assessment and quality control methods to materials scientists, and recently, the identification and counting of cells for automation of bioimaging laboratories.