The School of Information announced today that Dr. Timnit Gebru, founder and executive director of the Distributed Artificial Intelligence Research Institute (DAIR) will deliver the keynote address at the School’s commencement ceremony on May 16, 2022, at the Greek Theatre at UC Berkeley.

One of the most prominent researchers working in the field of ethics in artificial intelligence, Gebru made headlines in 2020 after being forced from her position at Google, where she was co-lead of the Ethical Artificial Intelligence research team. Her dismissal sent shockwaves through the tech world and amplified the issue of Big Tech’s blindness to the bias that’s often baked into the powerful tools they create; it also sparked a labor movement that resulted in the first union formed by tech workers at Google.

“I am so pleased to have Dr. Gebru as our commencement keynote to help us chart a path beyond the fairness rhetoric and towards meaningful change.”
— Prof. Deirdre Mulligan

“[At Google], Gebru was simultaneously building technical and other means to make progress on AI ethics and pressing for workplaces that provide equal opportunities for Black and other historically marginalized people, and the specific experiences, views, and values they bring to the table,” remarked School of Information professor Deirdre Mulligan, faculty Director of the Berkeley Center for Law & Technology and co-organizer of the Algorithmic Fairness & Opacity Working Group.

“She was connecting reforms to hiring practices, corporate cultures, business models, and her research,” Mulligan continued, “and arguing that all of it needs to change to address the structural inequalities in our societies. I am so pleased to have Dr. Gebru as our commencement keynote to help us chart a path beyond the fairness rhetoric and towards meaningful change.”

Gebru received her Ph.D. from Stanford University, and completed a postdoctorate at Microsoft Research, New York City in the FATE (Fairness Accountability Transparency and Ethics in AI) group, where she studied algorithmic bias and the ethical implications underlying projects aiming to gain insights from data. She also co-founded Black in AI, a nonprofit that works to increase the presence, inclusion, visibility, and health of Black people in the field of AI, and she serves on the board of AddisCoder, a nonprofit dedicated to teaching algorithms and computer programming to Ethiopian high school students, free of charge.

“I’m inspired by her capacity to fight for justice, practice hope, and support those who need it the most.”
— Prof. Niloufar Salehi

Her work has been covered by outlets ranging from the New York Times to The Economist, and she has been named to notable lists such as the Bloomberg 50, Wired 25, and Forbes 30 inspirational women. In 2020 she was awarded the Electronic Frontier Foundation’s Pioneer Award along with Joy Buolamwini and Deborah Raji, for their work in pursuit of algorithmic justice.

“Timnit has been a trailblazer in many of the areas that we at the I School study and care about including the societal impact of algorithmic systems and issues of bias and discrimination,” said School of Information Assistant Professor Niloufar Salehi. “I’m inspired by her capacity to fight for justice, practice hope, and support those who need it the most.”

At Commencement, Jennifer Urban Celebrates “Gift of the I School Approach”

Jennifer Urban, board chair of the California Privacy Protection Agency and clinical professor of law at the UC Berkeley School of Law, was keynote speaker at the School of Information online graduation on January 16, 2022. 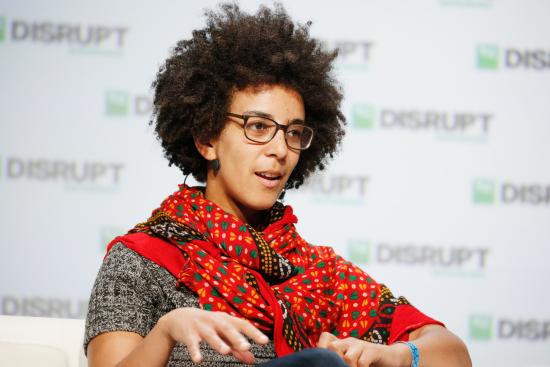 Timnit Gebru speaks onstage at TechCrunch in September 2018. (Photo by Kimberly White/Getty Images for TechCrunch; licensed under CC BY 2.0)