During the recent Cal Hacks 9.0 hackathon, a team of I School students won the “Best Hack for Fun” Award with their mood mapping tool. The tool, aptly named Moodz, allows Berkeley students to anonymously report their emotions for the day and see how others in their department or School are faring.

The team consisted of first-year MIMS students Natalie Chan, Ning Zhang, Andy Vo, and Tyler Wu, who were inspired by the impact of current world events on mental health. They based their design on the Spotify Wrapped audio aura feature in an attempt to similarly capture the “aura of Berkeley.”

“When walking through Berkeley’s campus, we can’t help but overhear and observe conversations about the levels of stress students face, the number of insecurities they discuss, and the intensity of anxiety on the faces of many students walking to class,” the team explained.

“When walking through Berkeley’s campus, we can’t help but overhear and observe conversations about the levels of stress students face, the number of insecurities they discuss, and the intensity of anxiety on the faces of many students walking to class.”
— Andy Vo

Cal Hacks, the world’s largest collegiate hackathon, returned to in-person this year for the first time in two years since the beginning of the pandemic. UC Berkeley students and unaffiliated developers from across the nation flocked to San Francisco to participate in the two-day event and bring their ideas to life. The organizers provided free food and drink for participants, games and movies for entertainment, and professional developers to serve as mentors.

During the intense 24-hour event, each Moodz teammate utilized their unique skill set, pulling from backgrounds in computer science, architecture, data science, and software engineering. The result? A web application built on React.js/TypeScript, Flask/Python, and Google Firebase with the ability to measure the severity of each “emotion” using natural language processing and assigned numerical sentiment to predetermined options. In other words, the app categorizes emotions with little hand-drawn graphics, which are then paired with data science to compile and compare with others on campus.

“As first-year students, we haven’t taken courses on natural language processing or data visualization yet, but our current coursework…really helped us in creating a story out of visualizing moods on Berkeley’s campus,” Andy Vo added.

The next arc for the product, the team hopes, will be to eventually roll it out as a simple mobile app for students and faculty to use. Their experience at Cal Hacks had assured them that there is an appetite for a mood tracker on campus, as students, professors, judges, and mentors alike reached out to support the idea. The team also hopes that the app could partner with University Health Services in the near future to roll out campaigns to best serve the Berkeley community.

“The ambitious goal is to one day see Moodz used on campuses all across the country,” said Vo, and the team believes that they can get there with community support and a little bit of user input data. 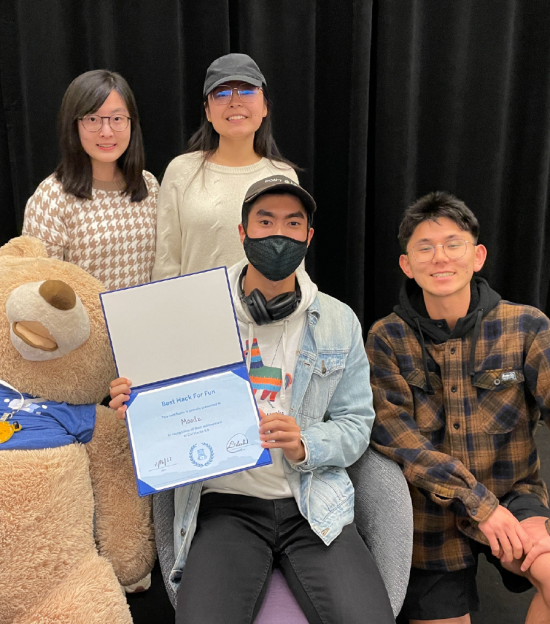 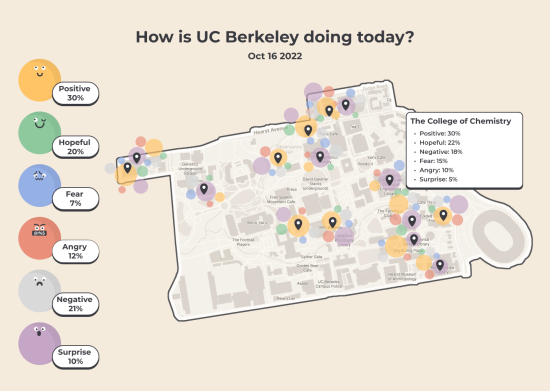