School of Information Professor Steven Weber will retire at the end of the year after more than thirty years at UC Berkeley. Weber is the faculty director for the Center for Long-term Cybersecurity, and served as the I School Associate Dean and Head of School in 2020.

Weber arrived on campus in 1989 as an assistant professor in the Department of Political Science. He joined the faculty at the School of Information in 2009 (a joint appointment with Political Science), and from 2003 to 2009, he served as director of the UC Berkeley Institute of International Studies. In 2015, with a historic $15-million grant from the Hewlett Foundation’s Cyber Initiative, Weber founded the Center for Long Term Cybersecurity (CLTC), where he serves as the faculty director and leads a multi-disciplinary research program on emerging cybersecurity issues at the intersection of new technologies, human behavior, and risk calculations made by firms and governments. Weber was instrumental in establishing the Master of Information and Cybersecurity (MICS), the School of Information’s newest degree program, in 2018.

He said he was pulled toward the I School because, “The main attraction for me was to be in a place where the center of gravity was the interdisciplinary study of how information technology was reshaping the human experience, from the individual to the social, to the global political economy where I was focused.”

There were differences between the I School and political science, though.

“Being in a truly interdisciplinary program is really hard work,” Weber said. “You have to learn the language of disparate fields, learn to respect alternate methods and epistemologies, and keep a deep humility about the discipline (in my case, political science) that you devoted decades of work to getting right. What always impressed me about my colleagues at the I School — more than anything else — is how hard we all worked at appreciating as best we could each other’s perspectives.”

The Center for Long Term Cybersecurity, he said, has been the center of his life for the past six years, and the team he’s built there is a fully integrated extension of the I School agenda and culture. He credits former Dean Anno Saxenian, who he said, “...gave me the unique opportunity to essentially start a new career when we launched CLTC.”

In just over a decade on the faculty, Steve Weber has made outsized contributions to the I School. He brought a fresh voice in areas like international business, open source software, scenario planning, and behavioral economics. His entrepreneurial energy was equally transformative: he built a unique MIDS course, Research Design and Applications for Data and Analysis (RDADA). He also secured funding for and built the School’s research crown jewel, the Center for Long-Term Cybersecurity, one of the most dynamic and outward-looking interdisciplinary centers on campus. Many of us don't accomplish as much over an entire career! We'll miss Steve's intellect, energy, and good humor.

To me, Steve’s example is about building things up and bringing a sense of vision to your work. He supported my ideas-that-were-too-big, and encouraged them to stay big, and taught me how to frame my work so others would be encouraged to view it less narrowly, and to see in it a potential for broader impact.

Steve brought this way of being to his work with the Center for Long-Term Cybersecurity, and he brought it to the classroom. Teaching Applied Behavioral Economics with him for those years was some of the most fun I had in my whole program, and part of that was because of the sense of possibility, the “playground of ideas” he cultivated in the classroom.

He partnered with me to set up my first independent research project, and introduced me to books and thinkers that helped me contextualize my research interests and think about policy in new ways. For example, he introduced me to a whole group of scholars thinking about how to measure human progress beyond GDP, and toward something more like wellbeing. Examples like these, and Steve’s own example, changed my thinking, and changed my career trajectory. They informed my choice of dissertation topic, which was about examining the interplay of emotion, wellbeing, and social media.

I’m sad that future generations of Berkeley students won’t be able to directly benefit from Steve’s mentorship like I did, but I’m mindful of the impact he leaves behind in the people and institutions he has built up. I’m grateful to Steve and lucky to have had him as a constant during my time at Berkeley — as a source of sanity, stability, inspiration, mentorship, and friendship.

When Steve started CLTC, cybersecurity was still largely seen as a narrow technical field. He thought we should have a place that brought together people who defined cybersecurity more broadly — Steve often says that cybersecurity is “everything where humans and machines intersect, that is important enough to be called ‘security.’”

The rest of the world has now caught up to this view, and CLTC is that place, because of Steve.

I’m grateful for Steve’s experience and generous curiosity. I’ve walked into many meetings with him unsure and unfocused and – after we tossed around, stretched, and up-framed numerous ideas – left with confidence and clear questions. I felt valued from the start and hope to emulate how, in the classroom, he would find something valuable to explore and extend in every student question or stray comment.

Steve Weber set up the CLTC for success. His initial framing was brilliant, because it defined a path that’s different from other cybersecurity centers, a path that only a university can fulfill. We have the luxury to think five to 10 years out. The focus on who participates in cybersecurity is also important, because we can erode the gender and race gaps that exist in the profession, and democratize decision-making while making security more usable.

Steve is an intellectual giant. He has a remarkable depth and breadth of thinking across history, political science, economics, and technology that makes him a uniquely powerful voice on some of today's most critical societal issues. Steve will leave behind enormous shoes that will be impossible to fill, but we are so incredibly grateful that we have been able to call him a colleague, a mentor, and a friend.

“I think, on reflection, I’ve always been a little bit restless intellectually and professionally,” Weber said. “I’ve been at Berkeley for more than 30 years, but really I had three different careers of about 10 years each. The pandemic brought the future a little closer to the present for me, my partner Gina, and our cats Napoleon and Mrs. Peel; so now became the right moment to make another life move and start over, this time in a different place.”

Steve and Gina are embarking on a big move: they’re leaving the Bay Area for the Hudson River Valley in New York. Steve says it’s not retirement; instead, it’s ‘new-life’: “I’ll be working on mostly the same issues and problems that I’ve spent the last decade grappling with, just in a more applied policy and decision-making environment; this has always been a focus for me but now I’ll get to make it my primary focus. And the new world means I can do it remotely rather than having to be in Washington DC all the time.”

Weber’s legacy, The Center for Long Term Cybersecurity, will be in the strong and steady hands of his trusted colleague and collaborator Chris Hoofnagle, a professor of information and law at UC Berkeley, who will be assuming the role of faculty director when Weber steps down. “Chris brings enormous energy, a fresh perspective, and deep subject matter expertise to this role; I can't wait to see how Ann and he take CLTC to the next level,” Weber said.

He’s looking forward to four distinct seasons that include thunderstorms, snow, and especially (if you know Steve), “Being just a one hour and 39-minute drive from the New Jersey Meadowlands, home to our beloved and much-maligned New York Football Giants.”

The I School thanks Professor Weber for his dedication, and wishes him all the best in this new chapter in his life and career.

Professor Chris Jay Hoofnagle will be the next Faculty Director of UC Berkeley’s Center for Long-Term Cybersecurity.

Weber has been a distinguished member of the UC Berkeley academic community for thirty years. His research focuses on the political economy of knowledge-intensive industries.

New $15 Million Center to Study the Future of Cybersecurity
UC Berkeley’s Center for Long-Term Cybersecurity will assess the possible range of future paths cybersecurity might take. 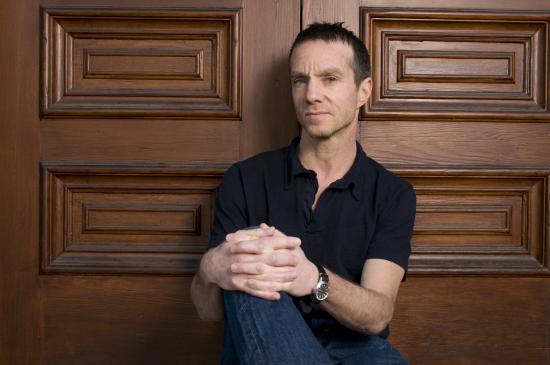 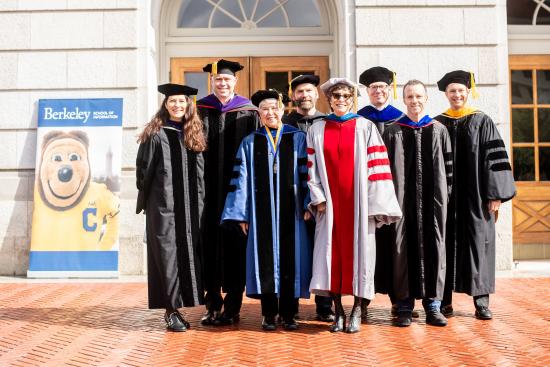 Weber with I School faculty, commencement, May 2019 (Noah Berger) 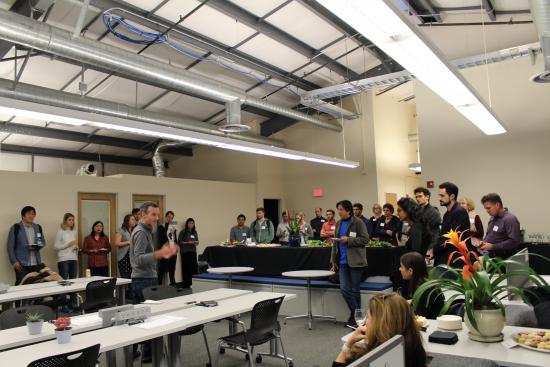 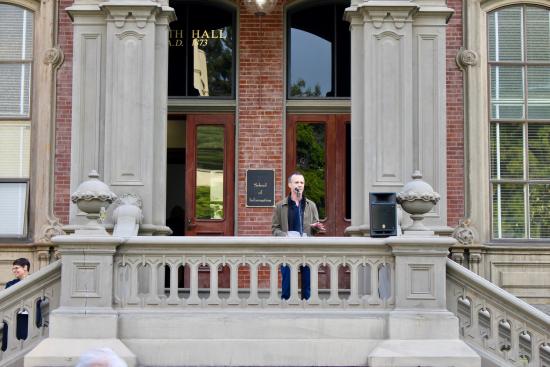 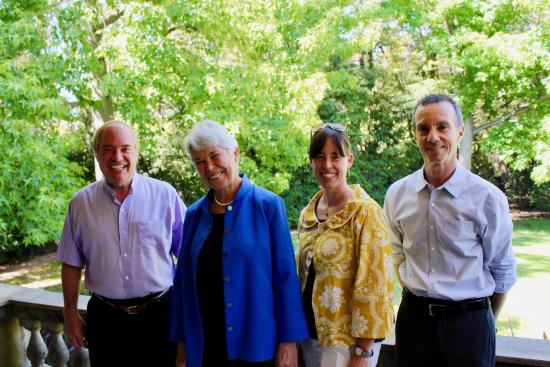 Weber with Tim Mather, Chancellor Carol Christ, and Ann Cleaveland at an event in 2019 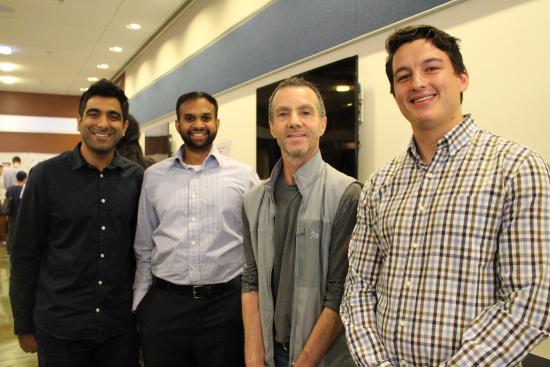