Aditya Parameswaran, assistant professor in the Berkeley School of Information and EECS department, has been awarded the 2019 Very Large Data Bases (VLDB) Early Career Research Contributions Award. The award annually recognizes an individual who has recently received a Ph.D. and has had an impact on research and practice through significant technical contributions since earning their doctorate.

Parameswaran wasn’t always concerned with making data management and data science easy to use. His Ph.D. work at Stanford University was based on optimizing crowdsourcing, or reducing the effort expended from crowd workers in their effort to annotate data. However, once he started teaching, the assistant professor discovered a huge issue: for the general population, which mostly consists of people who aren’t well-versed in programming and lack the training to use a database, the current tools used in deciphering large amounts of data were practically unusable.

“How do we bring spreadsheets to the big data era?”
— Aditya Parameswaran

In various fields, from medicine to journalism to manufacturing, the awardee observed that the available tools weren’t enough to make sense of datasets in an easy, efficient, and effective way. Once he came to this understanding, Parameswaran decided to apply the human-centered skills he learned from earning his Ph.D. to a new mission: building tools to democratize data science and simplifying data analytics.

His methodology was to investigate the existing tools already being used by domain experts and figure out what wasn’t working. For example, Parameswaran noted that the age-old spreadsheet is “a tool that is immensely popular, yet hasn’t been fundamentally revamped in multiple decades, and as a result can’t operate on large datasets.” This realization led him to question: “how do we bring spreadsheets to the big data era?” From there, Parameswaran and his team created DataSpread, a holistic tool that combined the intuitiveness of spreadsheets and scalability of databases.

Parameswaran followed this same method in his later projects as well. For instance, he found that, while visualization tools like Tableau were widely used, domain experts would still spend copious amounts of time looking for specific trends and patterns. So, he asked the question: “how do we allow searching for patterns or trends in visualizations, much like Internet search, but for visual patterns?” He and his team then created ZenVisage, a tool that automatically identifies relevant visualizations and presents them to the user.

“I hope these tools can empower a substantial fraction of the populace to be able to ask and get answers to questions about their data,” Parameswaran said. He sees his work as “inherently interdisciplinary,” and as a result, his team consists of students with a variety of interests and skills, unified under the ambitious challenges they face.

Commenting on the award, Parameswaran shared: “It’s deeply gratifying to receive this honor from the database community.” He adds, “Of course, the true and richly deserving recipients of this honor are my students, who have been both the brains and the brawn behind the tools we’ve built.”

Making it easy for individuals and teams to manage, analyze, and draw insights from large datasets.

Josh Blumenstock Honored for Research in the Public Interest

Prof Blumenstock received the Faculty Award for Research in the Public Interest for his research at the intersection of machine learning and development economics. 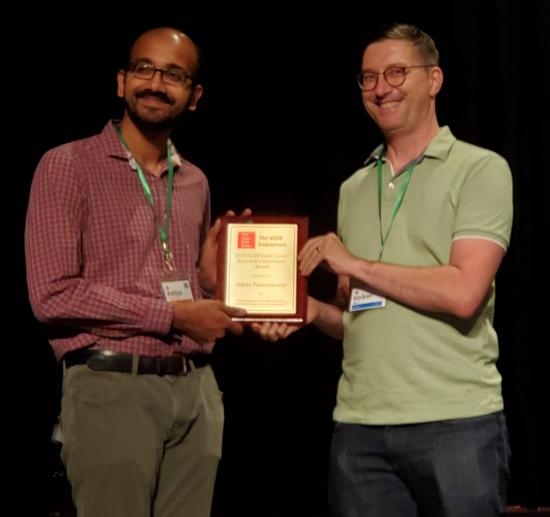 Parameswaran speaking to the audience after receiving the VLDB award.