“You’re going to be repeatedly called on to explain to people what a school of information is,” said commencement keynote speaker Geoffrey Nunberg to the class of 2019. “So I want to share with you my take about what makes this place exceptional, and how that makes you exceptional.”

What does it mean to graduate from a school of information?

Now, more than ever, a commitment to a human-centric approach to information and technology is critical, agreed commencement speakers Nunberg, Dean AnnaLee Saxenian, Chancellor Carol Christ, and students chosen to represent the MIMS, MIDS, and Ph.D. programs.

“[Our graduates] understand that the shape of technology evolution is not predetermined or inevitable,” said Dean Saxenian. “That technology doesn't have its own intent, or by itself can’t change the world. But rather that it must be developed with care and deliberation because it can be a very powerful amplifier, whether for good or for ill.”

Chancellor Carol Christ, a special guest speaker at Sunday’s ceremony, raised questions of how society will grapple with issues of power, technology, privacy, and artificial intelligence, concluding that I Schoolers were prepared to lead the charge: “The I School’s human-centric approach to information and data science education has, I think, made you the kind of leaders we need to take on these kind of questions, and I know you’re up to the task.”

“Through your experience and studies you have gained great power,” the Chancellor said. “And in a bit of wisdom that has been attributed sometimes to Voltaire and sometimes to Spider-Man — with great power comes great responsibility.”

“Information isn’t something you can study through a single window. It lives two lives.”

“Now I tend to see the world through the lens of language,” said Nunberg, “For starters, I’m never sure how our program should be to described—are we interdisciplinary, cross-disciplinary, multidisciplinary, transdisciplinary, or what?”

“Whether you call it eclecticism or interdisciplinarity or whatever,” he continued, “the important thing to understand is that it’s intrinsic to what we do. A geologist can do interdisciplinary collaboration, but it isn’t necessary. There’s nothing in the nature of a rock that requires you to think about it from multiple points of view.”

“Information isn’t something you can study through a single window,” said Nunberg. “It lives two lives.”

“As I Schoolers,” said Ph.D. student speaker Elaine Sedenberg, “we study and confront difficult truths about our world: the collision between technology, society, and the people behind the data. These tussles come with great consequences — those from the past, some on the front page of this morning’s New York Times, and many we see manifesting in our future.”

“We hold interdisciplinary skills and deep expertise unmatched by our colleagues in other disciplines,” Sedenberg continued. “We are trained to see and address the great promise and perils of technology. This is why we as Berkeley I Schoolers are exactly what the world needs right now.”

“We hold interdisciplinary skills and deep expertise unmatched by our colleagues in other disciplines. We are trained to see and address the great promise and perils of technology. This is why we as Berkeley I Schoolers are exactly what the world needs right now.”

“Just as the world needs computer science,” he said, “it needs us to make sure empathy is built into machines. For those of us who are more design-inclined, empathy is already at the heart of our practice. For those of us who are more analytical, what is the act of data crunching, if not a way to understand someone who is not us, in a computational way?”

MIDS student speaker Christina Papadimitriou reflected on the important role of data scientists on society. “Our profession is instrumental in driving change,” she said, “and it is so critically important to do this work with an ethical responsibility towards our communities. To do it with care and empathy, and to be fair…because there are people behind the datasets.”

“I want to urge you to challenge the way things are done in your organization and make people uncomfortable,” Papadimitriou continued. “Because we need to be uncomfortable first in order to be comfortable with change.”

Understanding is a catalyst for change

Elaine Sedenberg described a feeling likely shared by all Ph.D. students: “Completing a Ph.D. is akin to running a marathon, except you run one after another for 5-6 years until you reach a mountain—then you just climb to the end.”

“One thing I learned throughout this very long process is an unintuitive truth:” she shared, “often when you feel your most helpless and disenfranchised, you are actually your most powerful self... I believe there is a special kind of power that can only come from feeling like we have hit rock bottom. It is only from this place we can catalyze the type of real change in our lives and society that comes from great risk and persistent action.”

“Looking around this audience, I see proud families, partners, friends, and colleagues,” said Sedenberg. “Looking in our respective pasts, I see a network of educators and mentors starting in our childhoods who made this path possible for each of us many years ago.”

The past and the future

The May 2019 commencement marked the final time Dean Saxenian would preside over graduation. Saxenian is stepping down following 15 years and three terms as dean during which she piloted a period of tremendous growth. “It would be difficult to overstate the influence she’s had in her time here,” said Chancellor Carol Christ before recounting the impact Saxenian has made on growing the School while maintaining its commitment to educating professionals and scholars deeply committed to how people interact with information and technology.

“Ten years ago, in 2009, I presided over a commencement with a graduating class of 29 students,” remembered Saxenian. “Today we’re graduating 144 students...with close to 1400 alumni around the world.”

“When Anno took on the deanship,” Nunberg recalled, “this was a smallish school that was just beginning to spread its wings, and she had a huge role not just in expanding the programs but endowing it with the two features that to my mind really make it exceptional: first, its disciplinary breadth and second, its culture of community, which is what alumni are always pointing to as the most memorable feature of their experience here.” 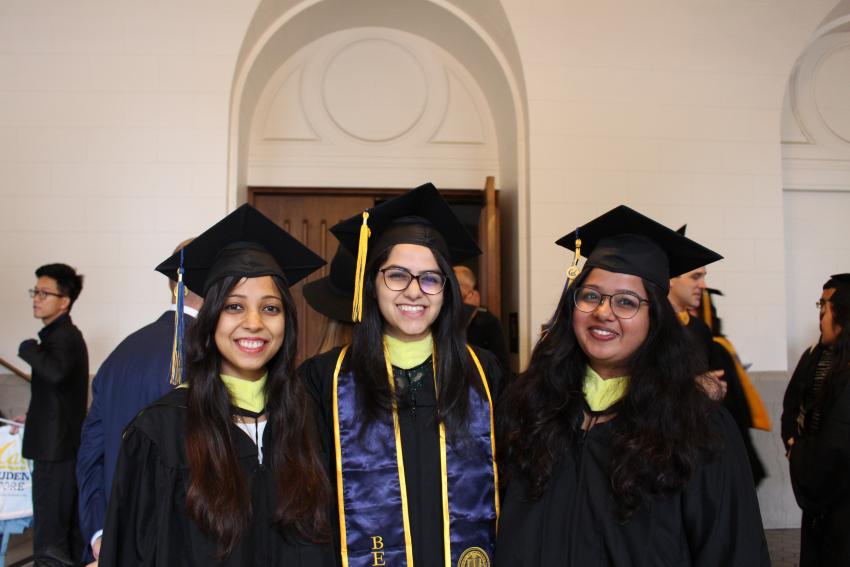 As the graduates continue on to their respective paths, they also because members of the global I School alumni community, one that continues to meet in person and online, and support each other through career and personal transitions for years to come.

“Recall that that phrase [alma mater] is the Latin for ‘nurturing mother.’”
— Geoffrey Nunberg

“If the past is any guide,” Professor Nunberg concluded, “most of you will go on to successful and fulfilling careers. We’d like to hear about them, because the cumulative success of our alumni redounds to the reputation of their alma mater. In that connection, recall that that phrase is the Latin for ‘nurturing mother.’ So I want to close with the four words that every mother says to her offspring as they go out to make their way in the world: ‘Don’t forget to write.’”

“I have no doubt that you, armed with your master’s and doctorates from our information school, are apt to thrive in the information age.”

Geoffrey Nunberg to I School Graduates: “We’re Rather Eclectic”

“I want to share with you my take about what makes this place exceptional, and how that makes you exceptional.”

144 students graduated from the I School in Spring 2019, including 3 Ph.D. students, 49 MIMS students, and 92 MIDS students — our largest MIDS graduating class to date! 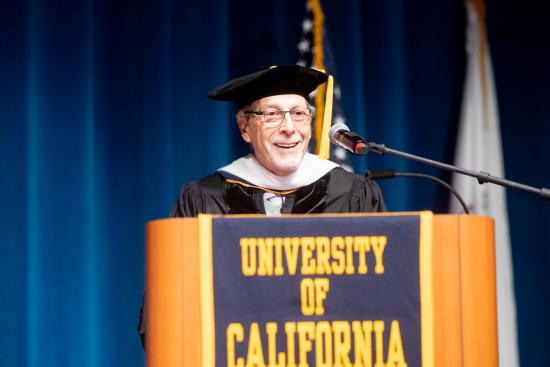 Geoffrey Nunberg is a linguist and adjunct full professor at UC Berkeley’s School of Information, and well-known author and a regular contributor on NPR’s Fresh Air 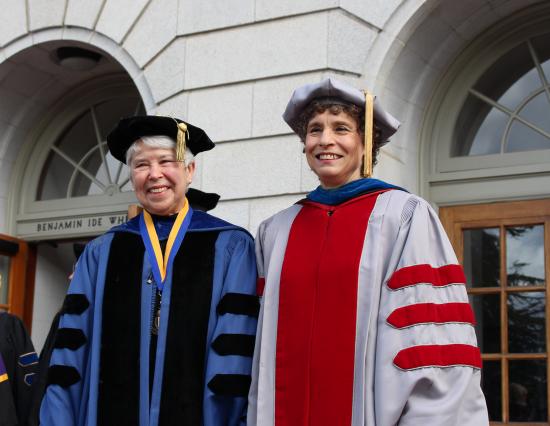 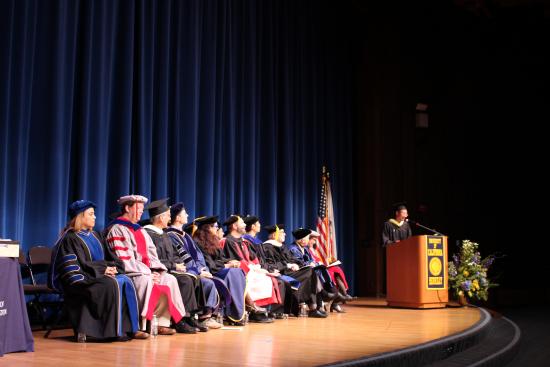 Soravis (Sun) Prakkamakul shared that he ran a recurrent neural network text generator trained by speeches of past MIMS speakers and got: “You all be information” 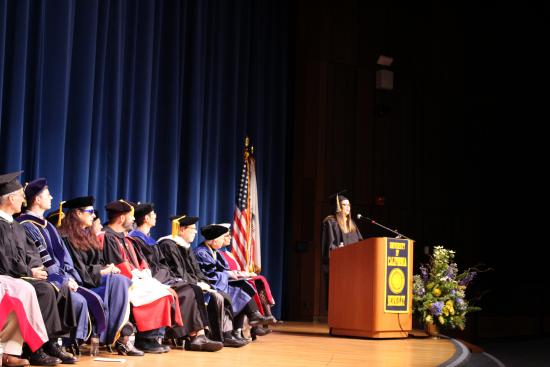 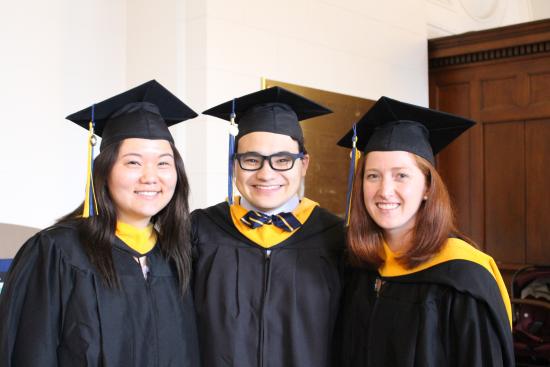 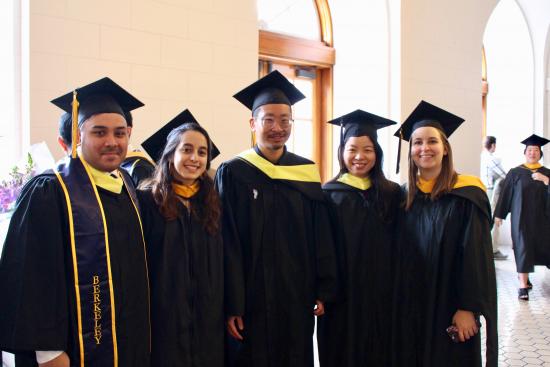 Many of the graduates and their families and friends in the audience traveled from afar to join the ceremony with representation from Mexico City, Córdoba Spain, São Paulo, Brazil, India, the United Kingdom, and various states across the US. 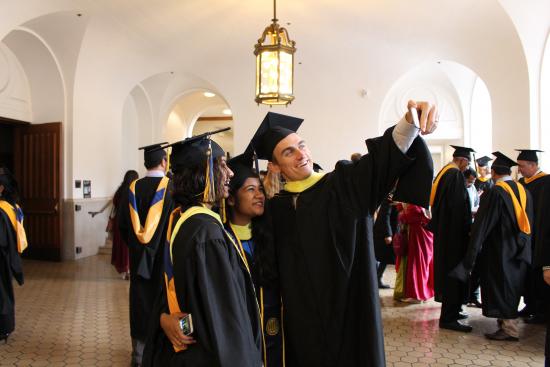 In spite of distance and uncharacteristically wet weather for May, Over 700 supporters were in the audience at Wheeler Auditorium. 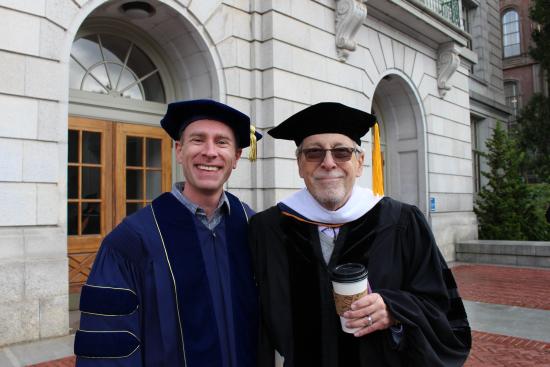