UC Berkeley School of Information startup Clinico has set out to disrupt the pharmaceutical industry by giving patients power over their data – all through the power of blockchain.

Clinico is one of fifteen finalists for the Frontier Innovation Awards 2018: Blockchain, vying for a prize of up to one million dollars in seed or token capital. Clinico is led by Master of Information Management and Systems (MIMS) students Edward Yip and Shannon Hamilton (both class of 2018). Their team also includes UC Berkeley computer science graduate Rishi Jethi.

Recently the finalists completed a one-day ‘blockchain bootcamp’ led by blockchain specialist Kira Noodleman of Bee Partners, who is hosting the upcoming awards. Noodleman is a UC Berkeley Haas School of Business MBA (2017) and alumna of the LAUNCH 2016 cohort.

“We want to tip the power balance from pharmaceutical companies back to patients and create a market to enable this empowered data sharing. In true I School spirit, we’re out to disrupt the industry.”
– Shannon Hamilton

Clinico allows patients across clinical trials to upload their data in one place. Researchers can access that data using encrypted contracts for data requests, use, and informed consent. Then, patients receive automatic payments whenever their data is used.

Yip and Hamilton both share backgrounds in the healthcare and pharmaceutical industries. The two came to the I School intending to figure out how technology could be used to improve those industries.

The team has been working on various iterations of this project throughout their time at the I School: “Clinico is an idea we’ve been mulling over and tweaking for the last two years,” Hamilton said. In addition to Clinico, the two both served as IMSA (Information Management Student Association) presidents and took many of the same classes together.

While working on Clinico, the team has faced both obstacles and triumphs along the way. Being part of the LAUNCH accelerator has helped them by allowing Yip and Hamilton to interview professionals within the pharmaceutical industry and former clinical trial patients. This has given them the crucial user experience research necessary to develop the best product for consumers.

The Blockchain Bootcamp day and LAUNCH accelerator have also helped the Clinico team learn more about basic startup principles and entrepreneurship ideas specific to blockchain startups. Clinico will continue to polish their business model and value proposition as they move through these programs.

“So much of our I School learnings are tied together in this project!” Hamilton said. “First of all, I think we’ve approached the problem from an interdisciplinary perspective. . . .Without a doubt, our I School learning has prepared us for success in both accelerator programs.” From classes in policy and privacy, to data structures and information organization, to social implications, the I School curriculum has played an influential role in Clinico’s development.

Next Up: Frontier Innovation Awards

The first annual Frontier Innovation Awards are being hosted this May by Bee Partners and presented by CalFounders to find the most disruptive blockchain idea of the year.

“Being selected as a finalist for this award right before our time at the I School ends is a much-welcomed affirmation of what we originally set out to do when we started at the I School: to find a way to use technology to improve the pharma/healthcare industry.”
– Edward Yip

Yip and Hamilton are both thrilled to be finalists for an award that could make a huge difference in the development of their business. “I’m extremely proud of what we’ve done,” Yip said, “because none of this has come easy.  We’ve been riddled with self-doubt, we’ve endured failure upon failure, and unlike school projects which end after a semester, we’ve been working at this for two long years. Being selected as a finalist for this award right before our time at the I School ends is a much-welcomed affirmation of what we originally set out to do when we started at the I School: to find a way to use technology to improve the pharma/healthcare industry.”

As the competition draws closer, Hamilton and Yip are nervous and excited. They will be presenting to a crowd of over 200 people, including prominent blockchain investors and venture capitalists. Exposure from this event alone is a great opportunity for Clinico, regardless of the outcome of the competition.

The Frontier Innovation Awards will be held May 11, 2018, in San Francisco. More information and tickets can be found on the event page.

Clinico will also be showcased during LAUNCH Demo Day on April 26, 2018 (along with a record number of other I Schoolers participating in the accelerator program – Usman Raza and Sandeep Pal of Clymb Health, Surya Sendyl of nearfarms, and Daniel Kent of Jobwell). More information and tickets can be found on the event page. 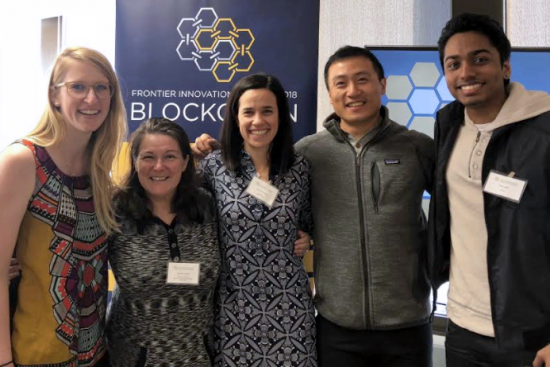 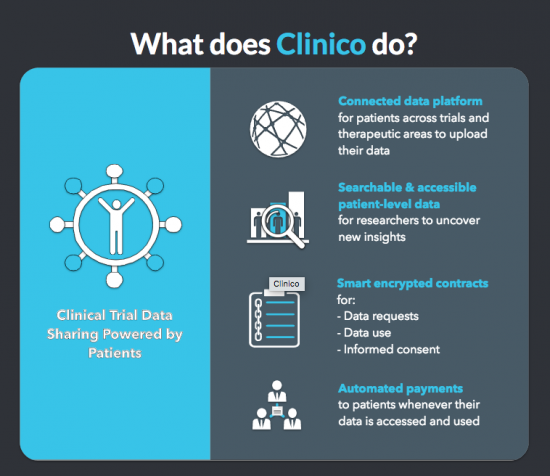 What does Clinico do? (via https://clinico.io/)