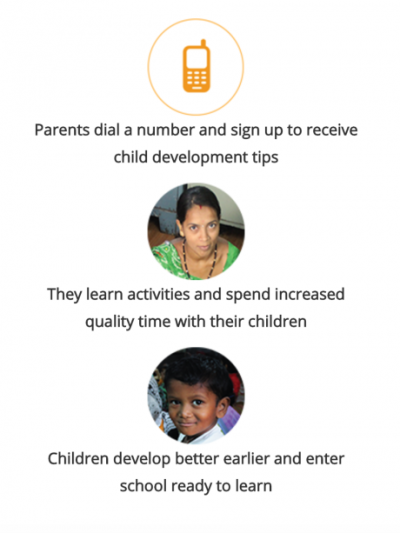 There are 150 million illiterate women in India who have trouble educating their children, leading to a cycle of illiteracy. Many of these mothers long to be a part of their child's education but lack the knowledge and resources to help. This disadvantages their children, who often fall behind in school and eventually drop out.

Dost is a nonprofit that provides parents regular audio calls with instructions to teach their kids in preparation for kindergarten. These lessons are simple for parents to understand and share with kids, and foster parental engagement in their child’s development. In a pilot test, Dost helped its users triple their home education, an increase correlated with a half-grade level of educational improvement. Dost costs parents just $0.91 a month, so the nonprofit is sustainable; the infusion of start-up capital will allow them build out lesson plans and infrastructure.

Dost was one of 103 projects accepted from over 7,200 applications for Y Combinator’s winter batch. Y Combinator provided seed funding for Dost, along with extensive mentorship, training, advice, and networking.

The Y Combinator presentation marks the pinnacle of a two-year development process for Jeyabal and cofounder Sneha Sheth. In spring 2015, Jeyabal initially teamed up with Sheth, then an MBA student at Berkeley’s Haas School of Business. The pair fleshed out the plan in Berkeley’s fall 2015 Social Lean Launchpad course.

The two conducted a pilot test in 2015 with over 100 mothers in Dharavi, Mumbai, India, one of the world’s largest slum communities. The pilot found that at least 70% of poor urban mothers have their own mobile phone, though rarely a smart phone, so the recorded voice messages were a good fit for their lives.

Pilot test participants were enthusiastic about Dost. “I always listen to Dost’s calls,” said one mother. “I especially like the numbers and activity messages, because they’re fun to do with my son at home. It feels good.”

“I want my kids to get good jobs where they don’t have to worry about money,” explained another Dost user. “My husband and I don’t speak English but if one of our kids could speak it, it would be very good for our family.”

After the pilot test, the two spent the next year updating and refining the product, seeking funding, creating content, and developing partnerships with local organizations in India.

“Throughout the process, I have been applying what I learned at the I School. Courses like Information Technology Economics, Strategy, and Policy; the ICTD Research Seminar; Technologies for Creativity and Learning; and Social Issues of Organization have been really helpful through this journey.”
–Sindhuja Jeyabal (MIMS 2016)

Dost officially launched in September 2016. Seven months later, they serve over a thousand mothers of young children in India. Each mother receives four phone calls each week to help her child prepare for school with activities and exercises customized for the child’s developmental stage.

Over its two-year development process, the project has racked up an impressive array of prizes and awards:

Jeyabal credits her I School education and MIMS degree with helping her develop the skills she needs for the project. “Throughout the last year, as we have been radically improving our product, I have been applying what I learned at the I School,” she said. In addition to the Lean Launchpad course, Jeyabal especially appreciated the insight she got from Info 234. Information Technology Economics, Strategy, and Policy; Info 290. ICTD Research Seminar; Info C263. Technologies for Creativity and Learning; and Info 203. Social Issues of Information.

Although the venture is currently focused on India, the team looks forward to expanding it to other developing countries in the future. 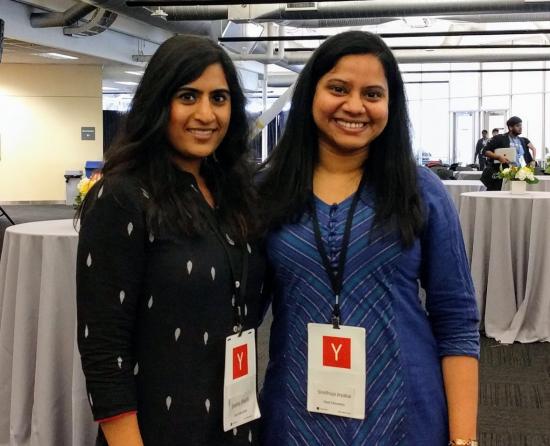 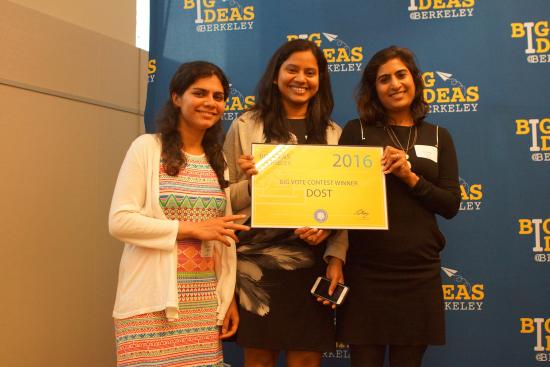 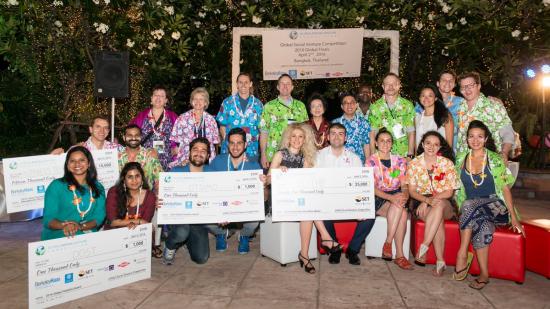 Dost was a finalist in the 2016 Global Social Venture Competition.