The newest I School MIMS career report shows that graduates are in demand more than ever before. They are well-prepared for success in their chosen career paths, because of their unique skill sets and experiences, informed by a cross-disciplinary curriculum which allows them to pursue their specific interests and passions.

They went to a variety of workplaces: big companies like Google, Microsoft, and LinkedIn; startups like Building Robotics, Twilio, and Uber; consulting positions at Deloitte, and EY Analytics; and nonprofits like the International Computer Science Institute and the Berkeley Institute of Data Science.

Visit the Career Paths page to view MIMS Career Surveys dating back to 2004 and MIMS Summer Internships Surveys since 2007. 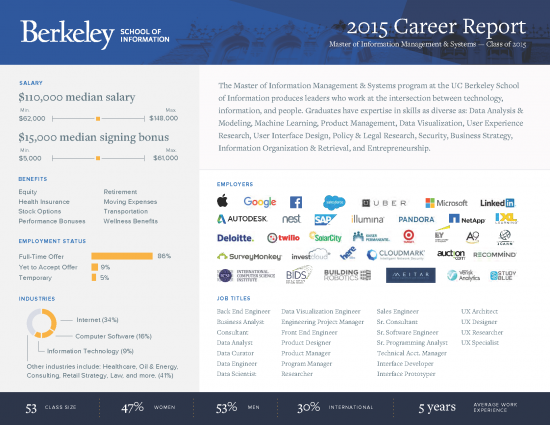