Four School of Information master’s students spent the Saturday of their Spring Break competing in the one-day Facebook Women’s Hackathon at Facebook headquarters in Menlo Park, California. At the end of the day, their project was awarded the second-place prize.

“We had decided in advance to play by our strengths — user experience and design,” said team member Ankita Bhosle. “Our courses and the design principles we’ve encountered in our classes really came to our help for the hackathon.”

Her teammate Sufia Siddiqui agreed. “The Information Organization Laboratory course helped our prototyping skills; because of that course, we immediately knew which tools to use for quick prototyping. The User Interface Design and Development course really helped with the design, and so did Needs and Usability Assessment.” said Siddiqui. “I also learned to think about development from a behavioral economics perspective, and how important it is to keep user choices limited and clear; professor Steve Weber’s Applied Behavioral Economics course was a big influence on me.”

Bhosle and Siddiqui and their teammates Arezu Aghaseyedjavadi and Ruchita Rathi are all first-year MIMS students. The four designed a new Facebook feature which allows users to save and organize especially interesting content from their own timeline or from elsewhere on Facebook. Later, they can “relive” that saved content in its social context. They built a prototype of the new feature using a Chrome browser extension.

The hackathon judges were Komal Mangtani, vice-president of engineering at Box, and Sarah Clatterbuck, LinkedIn’s senior manager of web development; Facebook engineers were also on hand to support and assist the participants. The judges praised the I School team for their hack’s innovation, and for designing a tool that fits into users’ real experiences and needs.

“We were competing against the best professional iOS and Android developers, and we stood out only because the I School has completely transformed us,” said Rathi. “We were thinking like true I Schoolers — design, info organization, social implications of information, and the whole gamut of other such things we’ve learned at the I School.”

Siddiqui was participating in her first coding hackathon. “I’ve worked in technology, but I never thought of myself as a ‘techie’ because I wasn’t a coder. But I wanted to support the presence of women in tech, and I wanted to challenge myself and get the experience,” she said. “And it was a great experience! In fact, I felt a little angry at myself for not participating in things like this sooner.”

“This hackathon confirmed that I really can use what I’m learning at the I School,” said Siddiqui. “The I School gave me that confidence.” 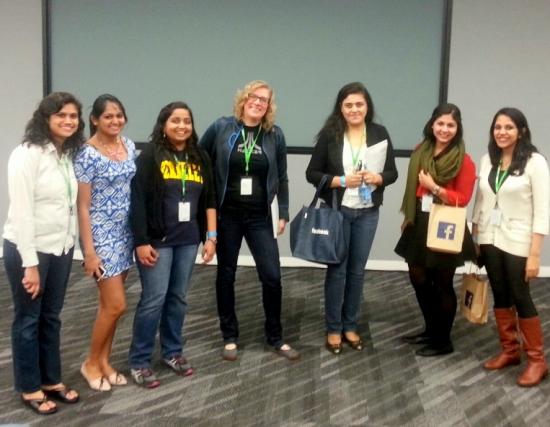 The I School hackathon team, with judges Sarah Clatterbuck and Komal Mangtani (center) 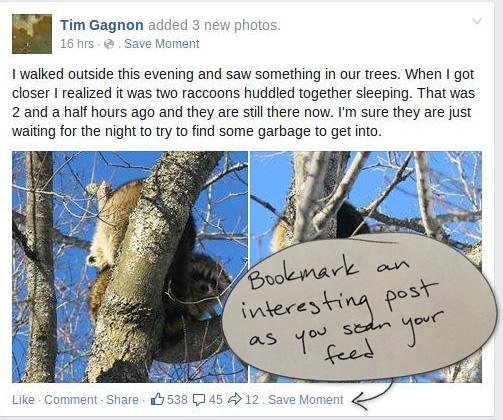 Users can bookmark interesting posts as they scan their Facebook feed. 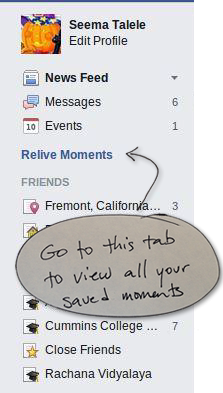 Facebook users can go to the "Relive moments" tab to view all of their saved posts. 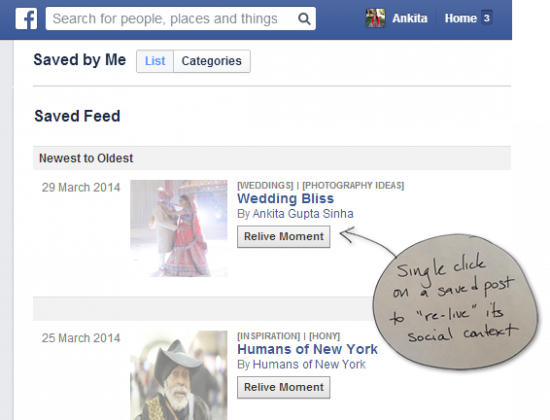 A single click on a saved post lets the user relive it in its original social context.