Berkeley I School Team Triumphs in Hackathon for Sustainable Fishing

When they awoke at the base of the Monterey Bay Aquarium’s 30-foot high kelp forest Saturday morning under the watchful gaze of leopard sharks, red octopuses, and dozens of other species of fish, four School of Information students and alumni knew that this was no ordinary programming project.

The four spent the weekend participating in the two-day nationwide Fishackathon to support sustainable fishing practices around the world. The team’s project was judged the best at the Monterey Bay Aquarium site and faced off against finalists from four other hackathon sites. After Tuesday’s final presentations, the School of Information team was awarded the hackathon grand prize.

School of Information MIMS student Dan Tsai and 2014 graduates Isha Dandavate, Jenton Lee, and Kate Rushton joined dozens of other programmers, students, and information professionals from Silicon Valley and across Northern California at the Monterey Bay Aquarium Friday afternoon for two straight days and nights of design and development.

The teams addressed challenges facing small-scale fisheries, including overfishing, illegal fishing, lack of resources, and the degradation of the marine environment. The US Department of State sponsored a series of hackathons at five sites across the country this weekend to create innovative solutions for the sustainable management of fisheries and the protection of our oceans, in coordination with the department’s “Our Ocean” conference.

Of the four, only Rushton had participated in a hackathon before; the other three were hackathon novices.

Isha Dandavate, Jenton Lee, and Kate Rushton all graduated last month from the School of Information’s Master of Information Management and Systems program and are taking a few months off before starting their new jobs — Lee and Rushton at Salesforce and Dandavate as a user experience researcher at YouTube. Dan Tsai is a user interface design intern at Salesforce this summer, and will return for his second year at the I School in the fall.

Despite being hackathon first-timers, they felt completely prepared for the task. “Two years ago, the thought of participating in a hackathon would have terrified me,” said Lee, who started at the I School with minimal programming or design experience. “But by the time I graduated this year, I felt like I could actually make meaningful contributions to a hackathon team.”

“What we learned at the I School was a big part of why were so successful at the hackathon.”
—Isha Dandavate (MIMS ’14)

“What we learned at the I School was a big part of why were so successful at the hackathon,” said Dandavate. “We knew that this is much more than an engineering problem; we also need to think about to social aspects, the policy implications, and more. After studying at the I School, that kind of thinking has become almost innate in us. And that makes it a better product.”

“We’ve seen so many of our classmates win multiple awards in hackathons and other competitions — it can't just be a coincidence that we're all from the same school,” observed Lee. “It makes me proud to call myself a School of Information alumnus.”

Spending two days and nights at the Monterey Bay Aquarium was a big part of the hackathon’s appeal. “Going into the weekend, I was just thrilled to be able to sleep over at the aquarium,” said Tsai. “Winning was never on the radar.”

After the sleeping in front of the aquarium’s famous kelp forest Friday night, the team spent the second night at the 90-foot open sea exhibit — the aquarium’s largest, with tuna, sharks, brilliant jellyfish, colorful puffins, and huge sea turtles. “It was even more epic,” according to Lee.

The aquarium also had teams of oceanographers and fishing researchers available as resources and consultants for all the hackathon teams, and helped connect them with the experts and information they needed to guide their designs.

“We had a blast! Having the hackathon in an aquarium has sort of ruined us for all other hackathons.”
—Isha Dandavate (MIMS ’14)

“We had a blast! I can’t even express how cool it was,” said Dandavate. “Having the hackathon in an aquarium has sort of ruined us for all other hackathons.”

The I School team worked on problems faced by the West Africa Regional Fisheries Program (WARFP), which is administered by the World Bank. WARFP is assisting Cape Verde, Senegal, Sierra Leone, Liberia, and Ghana to register, license, and monitor their entire commercial small-scale fishing fleets, comprising at least 30,000 canoes.

Since mobile technology has become widespread throughout West Africa, even in rural areas and fishing communities, WARFP believes that mobile phones could provide a viable platform for boat registration, licensing, and monitoring. The I School team set themselves to design and implement a mobile-based solution that meets the needs of the West Africa Regional Fisheries Program and is also sensitive to the real contexts of West African fishing communities.

“None of us was intimately familiar with the issues in West Africa, but the I School program trained us to ask the right questions and understand the situation and the stakeholders before we jumped blindly into engineering a solution,” explained Tsai.

“It’s not just about the technology: it’s about the people who use the technology,” said Dandavate. “So we started by being explicit about the values we wanted to incorporate.” The team designed for the ideal world where everyone has a smartphone — but also for the real world, where people don’t have smartphones, or have limited bandwidth, or even have limited literacy.

To make sure their project would work in the real world, the team conducted interviews with six different regional experts over the course of the weekend: two on the ground in West Africa, including the WARFP regional coordinator, and four others with experience in the region.

“The challenge of unsustainable fishing is really complex. We knew that to make an impact, a solution would have to take into account the social, cultural, and political contexts.”
—Dan Tsai (MIMS student)

“The challenge of unsustainable fishing is really complex,” Tsai observed. “We knew that to make an impact, a solution would have to take into account the social, cultural, and political contexts.”

The resulting tool, called “Fish DB,” allows fishers to register their boats, get fishing licenses, and report any illegal fishing activity that they observe. It serves both the fishers who need to submit registrations and the government staff who process them. The result is a three-prong tool:

The mobile app was designed to be as usable as possible for even fishers with marginal literacy: many of the menu options include pictures or diagrams to supplement the textual descriptions.

Tsai crediting the team’s School of Information coursework with preparing them for the task. “The design and research skills we learned at the I School really helped us make a cohesive and polished system,” he said. “And with a lot of group projects from class under our belts, we were also comfortable presenting a compelling story to the judges.”

“It was a crazy day and a half — it definitely made us thankful for all of our I School classes and projects and presentations,” said Dandavate. “In just a day and a half, we were able to build something that might actually make a real difference. It was really very rewarding.” 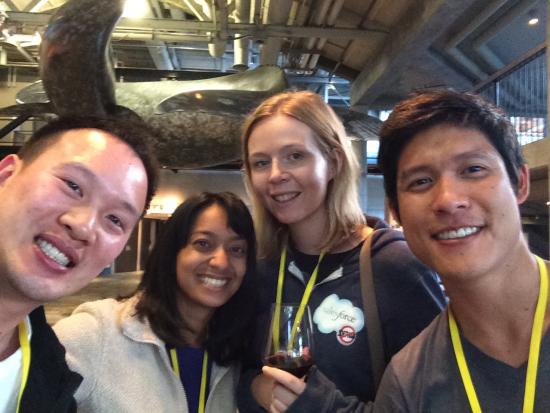 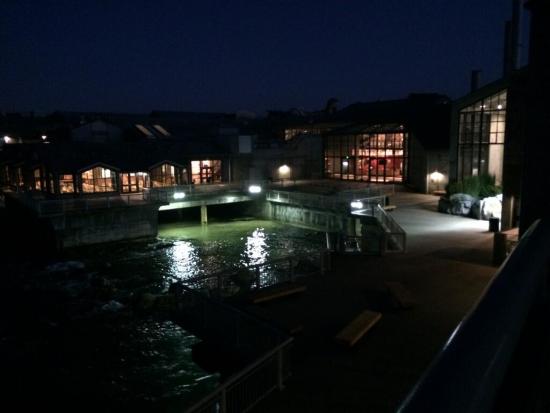 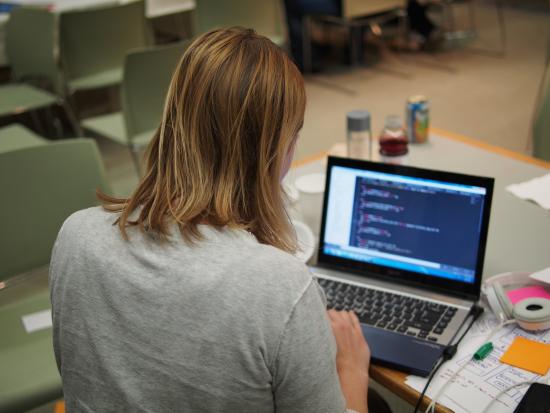 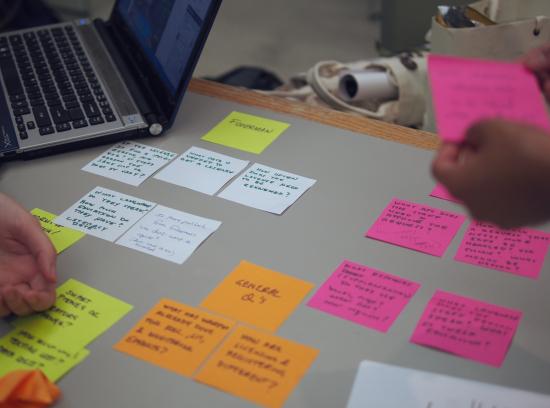 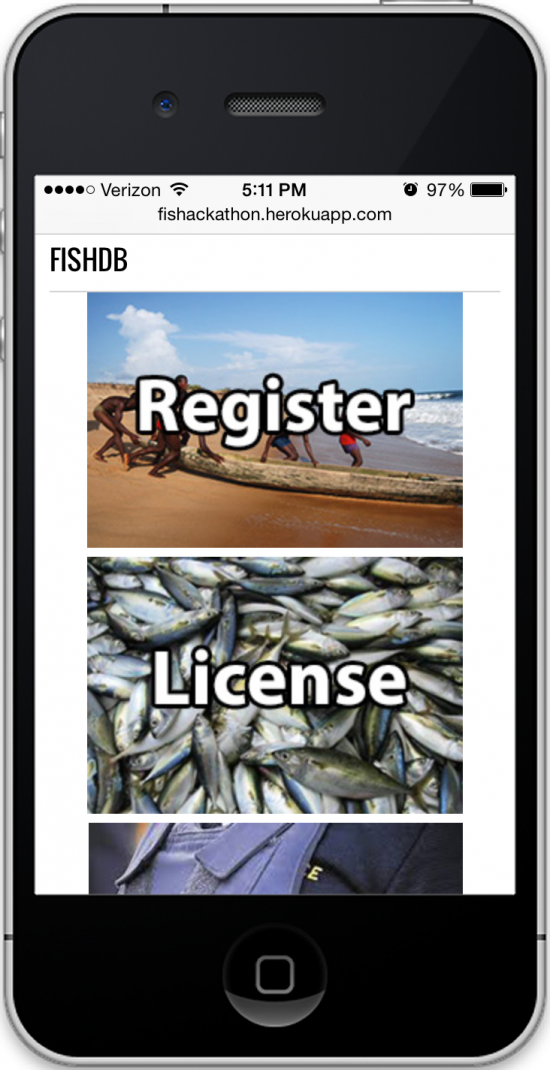 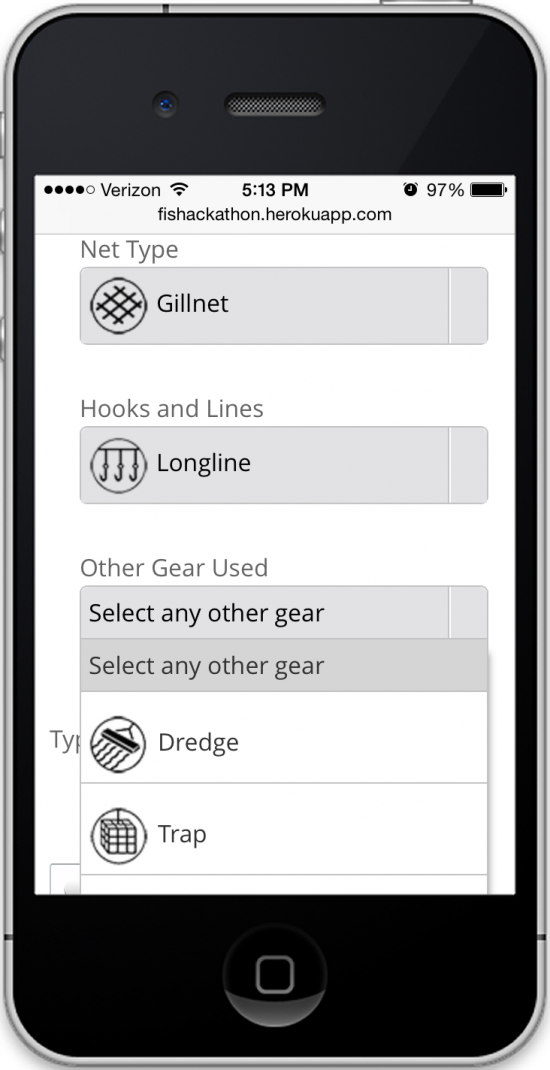 For marginally literate users, the mobile app’s options include photos or diagrams in addition to text. 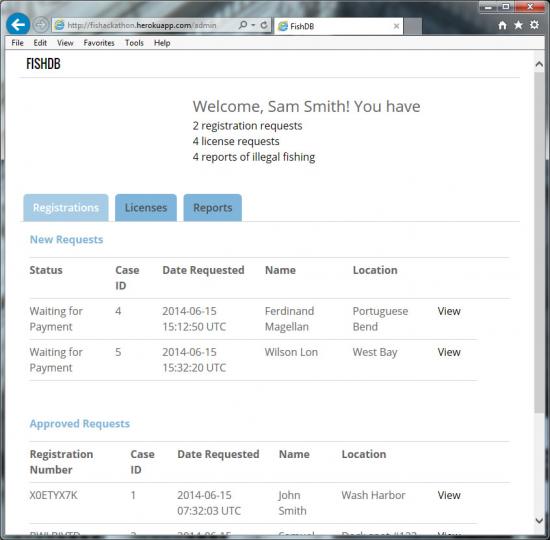