Don’t be surprised if you hear a buzzing sound in the hallways of South Hall this semester; it’s the sound of the future, in the form of small student-piloted unmanned aerial vehicles, or drones.

This semester, a small team of School of Information students is experimenting with drones: becoming familiar with drones’ capabilities and imagining their future applications. The eight students, who call their group the “Drone Lab,” are working together in a South Hall classroom to develop open-source software for their drones and then testing them in the classroom, in the building’s atrium, and (occasionally) on the South Hall lawn.

“Drones have a pretty bad reputation,” admitted Dave Lester, a second-year MIMS student; when most people hear the word “drone,” they imagine high-tech killing machines or government surveillance. “We're trying to do something a little different in Drone Lab,” said Lester, who was formerly the assistant director of the Maryland Institute for Technology in the Humanities at the University of Maryland. “We're interested in the technical capabilities of drones, but also thinking through the socially good things that we can use drones for.”

“It’s a terrible, awful shame that many people only think of drones as flying objects that deliver weapons to targets,” said associate professor Coye Cheshire, Drone Lab’s faculty sponsor. “Just like airplanes, rockets, cars, and boats — you can tie a weapon on to any of those things, or you can do something interesting and maybe even helpful or good with them.”

The students’ drones wouldn’t be capable of high-altitude surveillance, even if they were interested in it, since its range is limited to a couple hundred feet. The students are working with the Parrot AR.Drone 2.0, a consumer-grade drone priced at about $300 that’s a step above a model airplane, but many steps below military or civilian surveillance drones. The AR.Drone is a quadcopter — a small helicopter with four rotors — and it comes equipped with a high-definition 720p forward-facing camera, a downward-facing camera, an accelerometer, a gyroscope, a magnetometer, a pair of ultrasound altimeters, a rechargeable battery, and a 1GHz 32-bit processor running the Linux operating system. Parrot makes a few accessories, like a GPS sensor and a longer-lasting battery, and some hackers have figured out ways to attach additional devices, like environmental sensors.

Out of the box, the AR.Drone can be controlled by a smartphone app and piloted like a remote-controlled plane — but the real power is the ability to install your own software on the drone itself, allowing it to fly autonomously. When the students upload a specific set of instructions to the drone, it can fly off and perform specialized tasks on its own, reacting to what is sees and senses. “These are basically computers that can fly,” explained Lester.

The students started by installing node.js, a new software platform designed for building fast, scalable network applications in JavaScript, along with the node-ar-drone module. There is a growing community of developers writing and sharing open-source software modules for AR.drones; the I School Drone Lab is building on this foundation and sharing their own software modules with the community.

Working with drones first-hand has sparked the students’ imaginations for the non-military possibilities presented by drones. For several of them, the starting point was the March 2012 “launch” of TacoCopter.com, a drone-based service that purported to deliver fresh tacos to patrons who had ordered from their GPS-enabled smartphone. Although TacoCopter turned out be a hoax, automated food delivery is really just the tip of the iceberg.

“Our students are finding new and innovative ways to use the devices to do interesting things,” said professor Cheshire. “For example, can you get a quadcopter to pick up and deliver objects on demand? Can you program the device to recognize hand gestures and other motions, and then respond in various ways?”

“There are lots of uses for drones that people may not typically think of when they hear the term,” said Lester. His teammate Elliot Nahman, also a second-year MIMS student, agreed. “I’m particularly interested in strapping sensors to it,” said Nahman. “Maybe you can use it in building science, to gather temperature profiles across a very tall space. Or there’s the potential for pollution monitoring: you can fly around the city and gather pollution data that would otherwise be difficult to collect.”

This week, India announced an effort to protect the rare one-horned rhino from poachers by using drones to patrol the borders of the vast Kaziranga National Park. In additon, a recent TIME Magazine article listed dozens of socially beneficial applications of drones:

“In Costa Rica they're used to study volcanoes. In Japan drones dust crops and track schools of tuna; emergency workers used one to survey the damage at Fukushima…. Farmers are already using drones to monitor their crops; a weekly overhead picture of a field can give them the information they need to use less chemicals and water on the plants, saving money and the environment. Scientists use drones for wildlife conservation, mapping the nests of endangered species without disturbing them. And energy companies use drones to monitor electric pylons and gas pipelines.”

“So far the list of applicants for permission to fly drones [in the U.S.] consists mostly of universities, public agencies and drone manufacturers,” reports TIME Magazine. “According to its FAA application, Washington State's department of transportation wants to try using drones for avalanche control. The U.S. Department of Energy plans to use a helicopter drone to take air samples. The Forest Service wants drones to help fight fires.” In addition, delivery companies like FedEx have been salivating for years over the possibility of employing drones.

The spread of drones has raised a number of new regulatory and policy questions, led by widespread concerns about privacy. The Drone Lab team is studying the legal and social implications of drones and thinking about policies that could balance the benefits of the technology with its potential dark side.

“Drones are likely to have a profound impact on the future, but right now they exist in a sort of legal gray zone,” said Dave Lester. Our current laws were mostly designed for a previous generation’s technology, and it’s not always clear how they apply to technological innovations.

“As a society, it’s important that we figure out how to deal with flying devices with cameras,” said professor Cheshire, whose research focuses on the social impacts of information technologies. “I’m pushing the students to think through the privacy implications of autonomous flying cameras, while also looking for more helpful and useful applications for them — such as wildlife management, event photography, and more.”

Regulation of drones is also concerned with the safety of the airways. Currently, the Federal Aviation Administration (FAA) forbids the commercial use of drones without specific authorization, although the FAA is working on new regulations to allow commercial drone flights by 2015.

The widespread availability of a drone that can be purchased — and programmed — by everyday people is a very recent breakthrough. At the moment, they’re primarily a high-end toy, “but the implications are potentially profound, in terms of how we interact with our environment, with other people, and with the world,” observed Dave Lester.

“Flying the drone lets me see the world from a new perspective, and hacking on it helps me understand how this technology can be a platform for creativity," he said. “So many interesting applications are possible; it's a very liberating personal technology.” 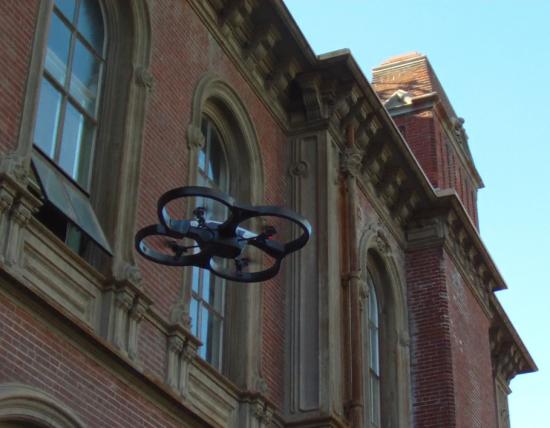 Drone Lab students are testing their drones in and around South Hall. 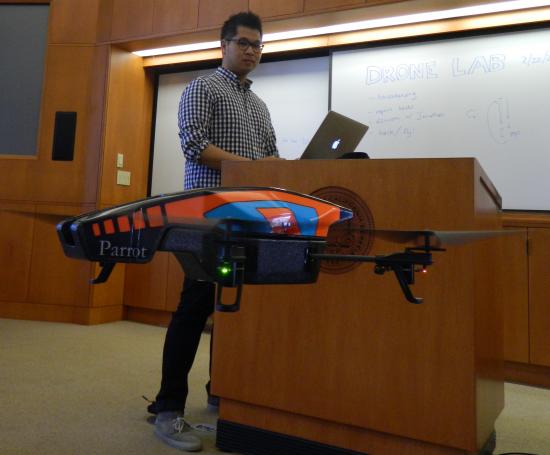 Eight I School students are becoming familiar with drones’ capabilities and imagining their future applications.

The Parrot AR.Drone 2.0 is a consumer-grade quadcopter — a small helicopter with four rotors. 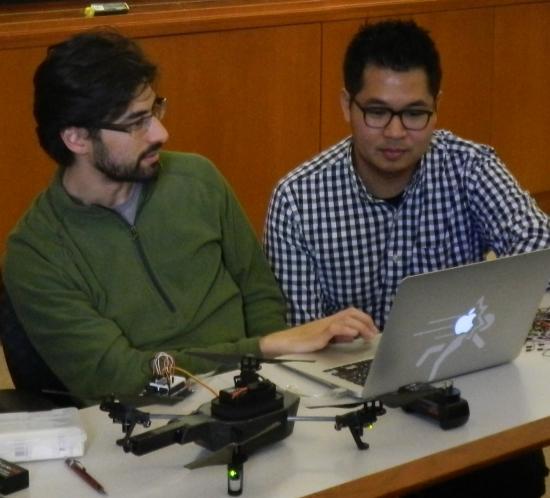 Students are developing open-source software modules to share with the drone-development community. 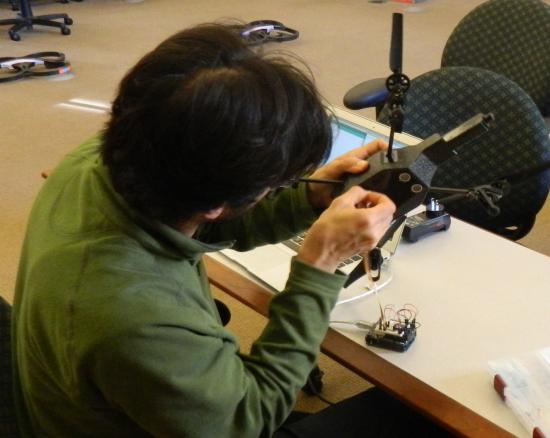 Students are experimenting with adding custom sensors to the drones. 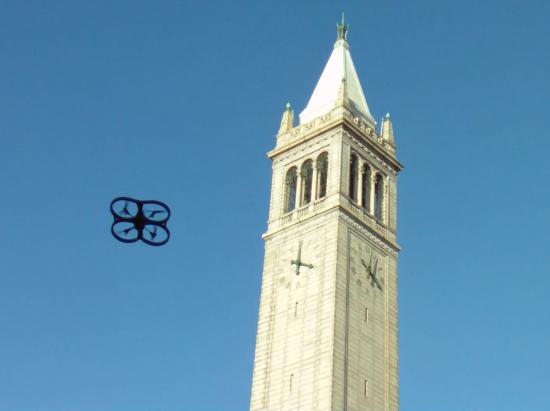