Throughout Morocco, poor, rural artisans are empowered to sell their handmade products online using the Anou platform, which was developed by Peace Corps volunteers. Adding GPS functionality to Anou could help the application market the products more effectively, by automatically revealing the product’s context and telling a story about the location in a way that connects emotionally with the buyer.

Meanwhile, the Peace Corps is revising their application process for prospective volunteers, and needs a new web interface to help applicants sort through their 4,000+ volunteer opportunities and find the best fit.

And the Peace Corps has long struggled to find a global digital knowledge-sharing platform to make the collective knowledge and experience of Peace Corps volunteers and staff available worldwide, on various devices, even in low-bandwidth environments.

Dozens of programmers, designers, students, and innovators gathered in Berkeley’s South Hall last weekend to tackle these problems and more, knowing that their work could make a real difference for developing countries around the world.

The third annual I School hackathon was planned and organized entirely by a team of I School student volunteers; this year’s hackathon focused on social innovation, in partnership with the Peace Corps. The Peace Corps invites volunteers to serve their country by living and working in developing countries. Since 1961, more than 210,000 Peace Corps volunteers have served in 139 host countries to work on issues ranging from AIDS education to information technology and environmental preservation.

Isha Dandavate and Seema Puthyapurayil, co-presidents of IMSA, the I School student organization, also headed the hackathon planning team. “When Seema and I were elected presidents of IMSA, we wanted to bring more of a service-oriented perspective to student events. Working with the Peace Corps was the perfect opportunity to do that,” said Dandavate. “We were excited to plan an event that would give I Schoolers and others all the benefits of participating in a hackathon, while also making an impact.”

Patrick Choquette, the Peace Corps’s acting director of innovation, kicked off the hackathon on Friday evening by unveiling ten different challenges for participants choose from. He and his co-workers described the context and specific needs of each scenario and provided participants with real-world datasets, document collections, code repositories, photographs, and other resources to use in their work

“The Peace Corps provided some really interesting problems statements,” said Puthyapurayil. “I've been to a bunch of hackathons, but the Peace Corps made this one of my best hackathon experiences ever.”

Sayantan Mukhopadhyay, second-year MIMS student at the I School, agreed. “Some of the problems statements were very broad, while others were really narrow,” he explained. “This gave all the teams the opportunity to find something that matched their interests.”

The fifty-one hackathon participants divided up into seven teams and set themselves to design and implement solutions to their challenges through the night and into the day on Saturday, with the hackathon providing dinner, breakfast, lunch, and lots and lots of caffeine.

Coding Through the Night

Mukhopadhyay teamed up with MIMS students Priya Iyer and Timothy Meyers to work on the GPS-enabled online marketplace for Moroccan artisans, a project they dubbed “Discover Morocco.”

The Discover Morocco team worked straight through the night, designing, gathering user data, coding, and testing. “I only slept one hour,” said Mukhopadhyay. And other teams did similarly. “Several people brought their own pillows, but I don’t think they slept much,” observed Mukhopadhyay.

“A bunch of teams stayed the whole night,” said Puthyapurayil. “We drank a lot of coffee! Even though I wasn't competing, I ended up coding just to stay awake. I didn't sleep at all.”

The Discover Morocco team even did quick-and-dirty user research among the other hackathon participants. “We discovered that they knew almost nothing about Morocco,” said Mukhopadhyay, “so we made sure to include a lot of background information, including an interactive map, cultural information, and photos.”

The team also arranged a late-night international video chat with Anou founder Thomas Counsell in Morocco to discuss some of their ideas. “Thomas gave us very useful feedback,” said Mukhopadhyay. “After talking with him, we adjusted the design to avoid adding additional overhead for the artisans.”

In addition to the hackers, a half-dozen Peace Corps staff members and nine Peace Corps volunteers came to Berkeley to support and encourage the hackathon attendees.

“The Peace Corps people were really awesome,” said first-year MIMS student Shaun Giudici, who was participating in his first hackathon. “At least one of them stayed up with us all night, asking questions and giving feedback.”

“Normally at hackathons, people are mostly excited about their own ideas and own pet projects, but I was surprised by how many people wanted to help the Peace Corps. You could see the commitment.”
–Seema Puthyapurayil

This was the third hackathon for second-year MIMS student Christina Pham. She was impressed by how many Peace Corps volunteers showed up, as well. “Hearing their stories really made the experience more real,” she said. “It’s not just an idea — these people have really run into these problems.”

“I felt a lot more invested in this hackathon than I have in previous hackathons,” said Pham. “Having such well-defined problem statements encouraged us to address the design directly and to really think about the specific use cases.”

The mood in South Hall was surprisingly collaborative. “Normally at hackathons, people are mostly excited about their own ideas and own pet projects,” said Puthyapurayil, a veteran of multiple hackathons, “but I was surprised by how many people wanted to help the Peace Corps. The enthusiasm people showed for the Peace Corps was very special. You could see the commitment.”

Pham agreed. “The atmosphere was the best of the hackathons I've been to,” she said. “It was more fun, and more friendly. There was no real sense of competition.”

After twenty hours of hacking (“Not a lot of time, obviously!” Pham pointed out), the seven teams presented their projects to a panel of four judges on Saturday afternoon. The judges were Patrick Choquette, the Peace Corps’s acting director of innovation; Kurtis Heimerl, an electrical engineering and computer science Ph.D. candidate who focuses on designing mobile systems for international development; Elisa Oreglia, who just completed her Ph.D. in the I School with a focus on technology use in rural China; and Dave Rolnitzky (MIMS 2011), the cofounder of MobileWorks, a virtual staffing company with employees in developing regions across the world.

The judges selected three winning teams to share the $2,000 of prize money:

Choquette and the Peace Corps staff were delighted by the creativity and hard work on display, and hope to begin implementing several of the projects almost immediately.

“I think it’s great that they’re actually hoping to implement our project,” said Mukhopadhyay of the Discover Morocco team; the group already has a follow-up meeting planned to present their project to Anou staffers in Morocco. “That’s the reason that we chose to work on this project — because it could really be implemented on the ground, and could make a real impact,” said Mukhopadhyay.

“This really isn’t as intimidating as I thought. Everybody should be doing this! It’s just fun!”
–Shaun Giudici

Giudici was also delighted about a possible future for the PCOI project. His team developed a fully-functional prototype using Ruby on Rails, jQuery, and the Google Maps API — but they also devoted a lot of effort to designing an algorithm to filter and rank the 4,000-plus potential opportunities. Their algorithm helps match opportunities to applicants’ interests and skills, while also steering people toward the areas of greatest need.

“I learned a lot from being teamed up with people I’d never worked with before,” said Giudici. “We had a really balanced team with a range of complementary skills — including a mix of technical and non-technical skills.”

He was especially enthusiastic about the impact of interdisciplinary teamwork. “I want to get rid of the misconception that you have to be technically strong to make an impact at an event like this,” he said.

“This really isn’t as intimidating as I thought,” said Giudici. “Everybody should be doing this! It’s just fun!” 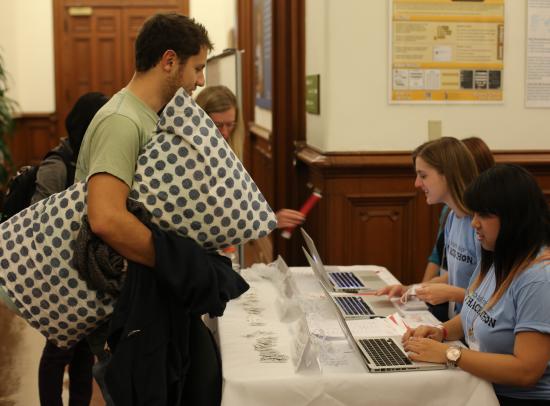 Several people brought their own pillows, but didn’t sleep much. 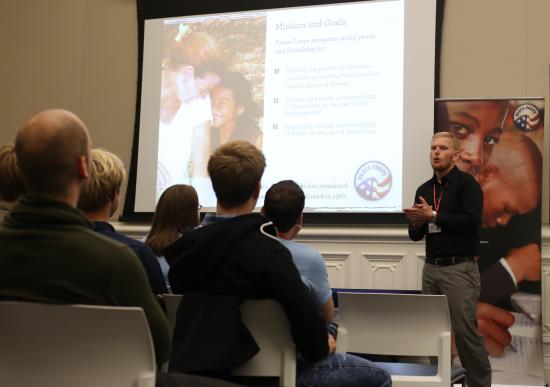 Peace Corps staff kick off the hackathon by introducing the ten challenges. 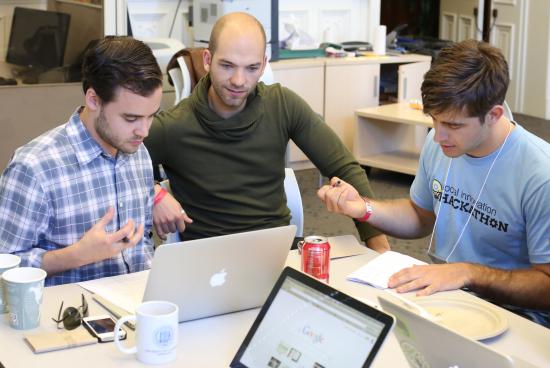 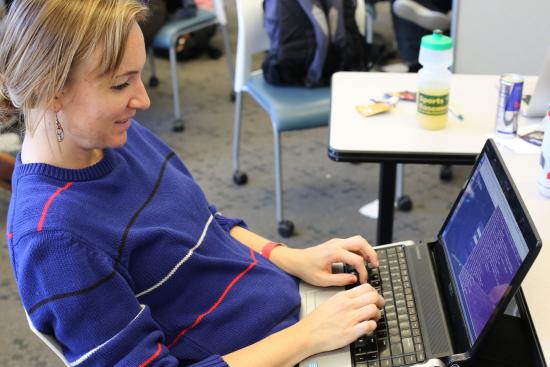 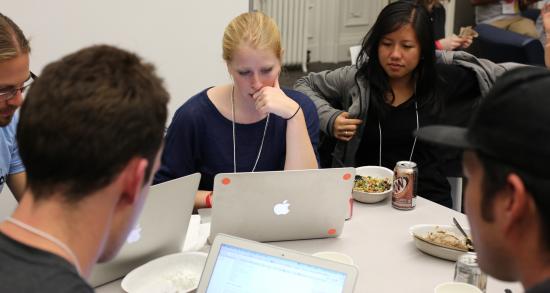 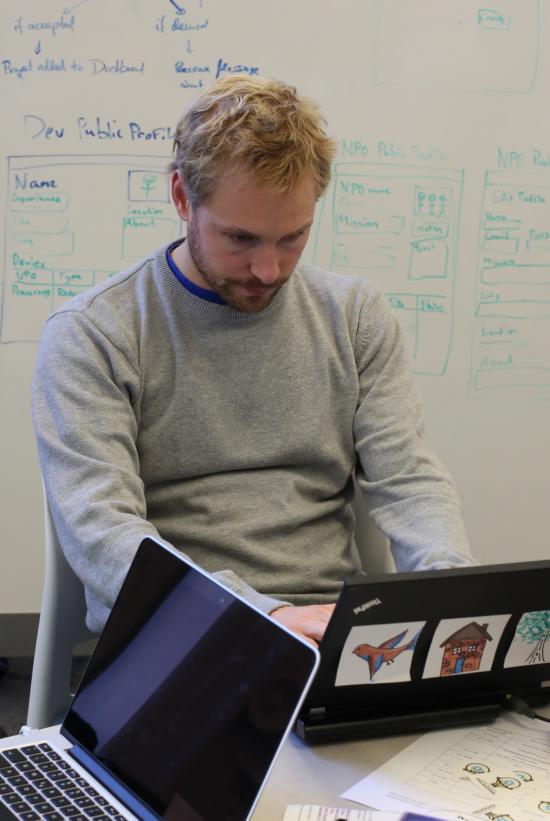 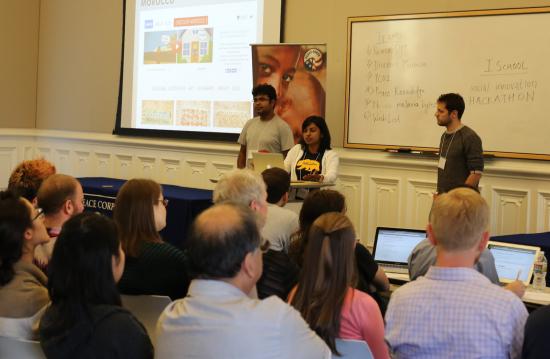