Coffee production is an $80 billion industry worldwide, with wholesale coffee prices at a fourteen-year high. And yet rural coffee farmers struggle to break even on the crops that they and their communities depend on. While many development agencies provide tools and training to boost the productivity of small farmers in the developing world, two School of Information students have identified a key challenge to small coffee growers: information.

Ariel Chait and Paul Goodman, both second-year MIMS students, along with Berkeley MBA student Iris Shim, have founded the social venture Acopio to address these challenges. Acopio, which means “harvest” in Spanish, is creating and deploying information-management tools to increase the profitability and influence of agricultural producers in the developing world.

The Acopio software helps track details about the coffee growers’ harvests and business transactions, replacing a hodgepodge of paper-based records and countless handwritten receipts. The software runs on PCs and mobile phones, and the team has designed a data workflow that does not rely on connectivity, as Internet connectivity is often unreliable in the locations where the coffee growers work.

The Coomprocom coffee cooperative in Matagalpa, Nicaragua, used a prototype of the Acopio software to track all of its activities for the 2011–2012 coffee harvest. The cooperative includes 178 local coffee growers who work together to sell their coffee beans to wholesalers and roasters; by combining forces, they can achieve economies of scale and bypass intermediaries through direct sales to buyers.

With the coffee growing season now drawing to a close, the Acopio team has begun reviewing the results of the pilot test. Despite the technical limitations of the prototype, the responses have been overwhelmingly positive. “The growers are excited by the possibility of Acopio providing the foundation for their data management for future harvest seasons,” said Chait.

“Going into the pilot test, we were optimistic that this tool could be useful, but we were also really aware of the contextual challenges,” said Goodman. “In Nicaragua, we found that we were able to deploy incredibly low-cost technology, get it up and running in a matter of days, and see results immediately. The pilot test validated our concept, and proved that Acopio is something that we should take to the next level.”

Acopio’s information systems give the growers the tools they need to improve their operational efficiency and manage high-volume operations, as well as building data-driven relationships with roasters and retailers, including specialty markets.

Up-to-date data about harvests and operations are also important to financiers and banks who invest in the coffee cooperatives. “The data transparency that we’re trying to achieve will help these cooperatives get loans and lower their interest rates,” explained Goodman. “Increased financing will make it possible for the growers to invest in their infrastructure, build out their facilities, and gain some stability in the volatile coffee market.”

One year ago, the Big Ideas @ Berkeley contest awarded first place to Acopio (then called “From Crop to Cup”). In 2012, the contest launched a new division called “Scaling Up Big Ideas” to recognize projects that have previously won a Big Ideas contest and have since generated excellent results.

Acopio has been named a finalist for the $10,000 “Scaling Up” Grand Prize, from among the 200-plus eligible projects. The three “Scaling Up” finalists will present their projects to a panel of judges on Friday afternoon at UC Berkeley.

Update: Following the project presentations on Friday, April 13, the judges named Acopio the Grand Prize winner in the “Scaling Up” contest.

History of the Acopio Project

The Acopio project began in early 2011, when Ariel Chait met with a coffee cooperative in Oaxaca, Mexico, that had previously worked with I School professor Tapan Parikh. Over discussions with the coffee growers, it became clear that many of their challenges could be addressed by a appropriately-designed data-collection and information-management system.

“That's part of the reason I came to the I School,” explained Chait. “I wanted to apply my computer-engineering training to a project in Latin America, which is a place I really care about, dealing with real people and real problems. So this project has been a perfect fit.”

Acopio has partnered with Root Capital, a nonprofit social investment fund financing grassroots businesses in developing countries. Root Capital has helped connect the Acopio team with coffee growers throughout Latin America, as well as importers, roasters, and other participants in the coffee value chain.

In summer 2011, Chait and Shim conducted exploratory research in Oaxaca, Mexico, one of Latin America’s leading coffee-growing regions; they interviewed coffee farmers, cooperatives, coffee shop owners, and lenders with the goal of testing their assumptions and refining the project concept.

When the coffee growers and cooperatives heard Chait and Shim present their ideas for Acopio, they were excited by the possibilities. “Every time we would have this conversation, we’d hear the same reaction,” said Chait. “They would say, ‘We’ve been trying to do this for a while, but we didn’t know where to start.’”

The team further fine-tuned their plan in the fall 2011 School of Information course Information and Communications Technologies for Social Enterprise. Now the team is reviewing the results from the Nicaragua pilot test and preparing an updated version of the software for this fall’s growing season.

Goodman and Chait recently visited Chiapas, Mexico, to participate in the annual meeting of CoopSol, where small-scale coffee producers from around Latin America meet with the roasters and retailers to talk about the current state of fair trade, best practices in fair trade, and organic coffee production.

At the meeting, the two were able to discuss the project and get feedback from leading coffee growers, roasters, and importers. Coffee cooperatives in Mexico, Nicaragua, and Peru are already interested in partnering with Acopio, and the team hopes to launch two new pilot tests by Fall 2012.

Goodman, Chait, and Shim are all completing their master’s degrees this May, and are planning to continue full-time business and software development into the summer.

Down the road, the team believes that the Acopio model could be expanded to other crops, as well. Technology like Acopio’s could help producers and importers comply with the new Food Safety Modernization Act, which is scheduled to take effect in May; the law will require food importers to be able to trace the food back to its source. Acopio’s data transparency and access also resonate with the Farm-to-Table movement, which is concerned with food source information.

Paul Goodman believes that Acopio can provide a new model for international development. “A lot of the models for helping small businesses in the developing world are donor-driven models. But this is an area where we’ve identified a business need, with a business opportunity,” said Goodman. “We feel that this has the potential to change our approach to development in ways that are just not possible through donor-driven aid.”

(All photos courtesy of Paul Goodman) 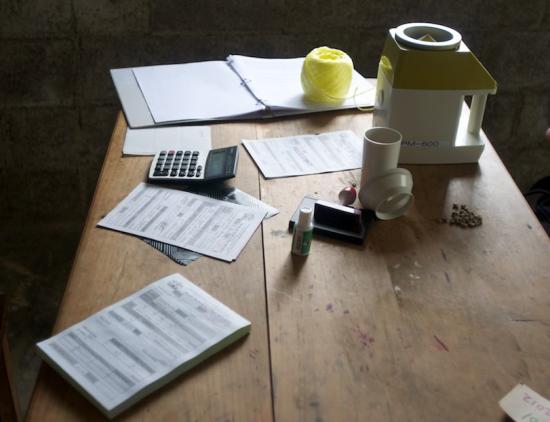 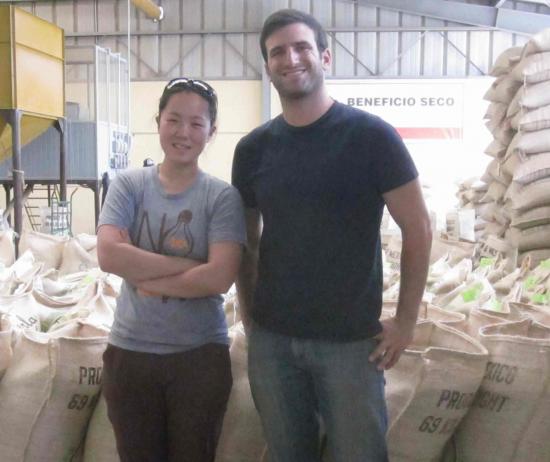 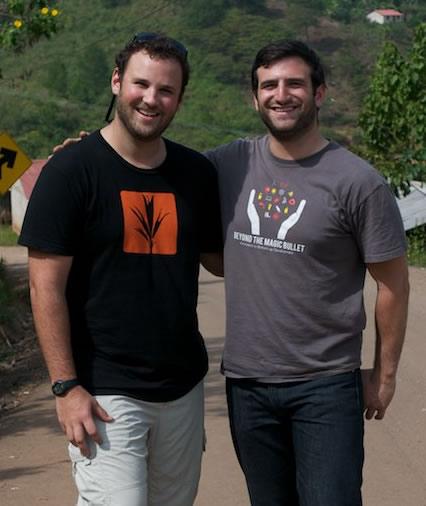 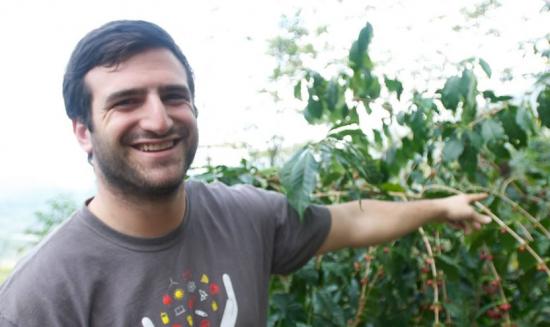 Ariel Chait with a coffee plant in Chiapas, Mexico 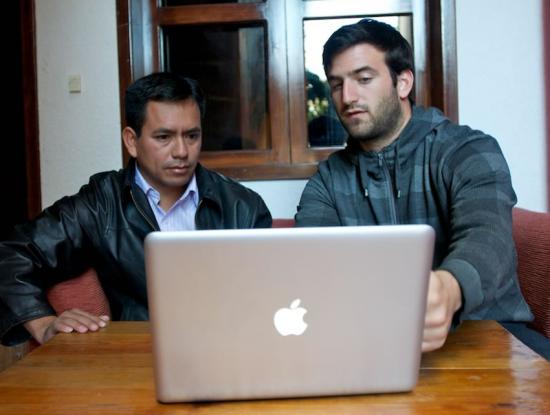 Ariel Chait demonstrates the Acopio prototype for a grower from a Peruvian coffee cooperative. 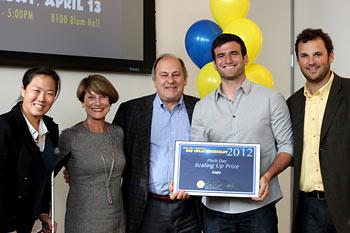 The Acopio team is awarded the Big Ideas “Scaling Up” Grand Prize by contest sponsors Virginia and Andrew Rudd.