From the San Francisco Chronicle
December 11, 2008

Shawna Hein tries to catch a virtual butterfly in a simulated elevator, one of the students' projects. (Paul Chinn / The Chronicle)

Bob Glushko blows virtual bubbles at a demonstration of projects by students in the "Theory and Practice of Tangible User Interfaces" class at UC Berkeley. (Paul Chinn / The Chronicle)

You can chase a virtual butterfly in a simulated elevator. Or try to sink a battleship. Or pop the bubbles your opponent is blowing through a wand.

A UC Berkeley class will open its doors to the public today to glimpse the future of interaction - at least as imagined by the students in the course.

It will be the second open house this week for the 11 final projects in "Theory and Practice of Tangible User Interfaces," a title that in theory is off-putting and in practice is fun.

The first open house, on Tuesday, transformed a venerable classroom in 135-year-old South Hall - the oldest building on campus - into a noisy and chaotic mix of science lab, video arcade and children's playground, full of Zen moments, tangled cords and makeshift projection screens.

"Students are really trying to apply what they've learned," said course instructor Kimiko Ryokai, 33, an assistant professor in the School of Information at Cal.... 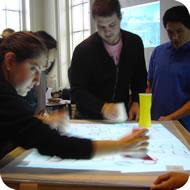