Projects will be judged by an invited panel of professionals from outside of the School of Information who will select two outstanding projects for the James R. Chen Award.

Each project team will have ten minutes to present and five minutes of Q&A.

Dr. Jennifer King is the Privacy and Data Policy Fellow at the Stanford University Institute for Human-Centered Artificial Intelligence. An information scientist by training, Dr. King is a recognized expert and scholar in information privacy. Sitting at the intersection of human-computer interaction, law, and the social sciences, her research examines the public’s understanding and expectations of online privacy as well as the policy implications of emerging technologies. Most recently, her research explored alternatives to notice and consent (with the World Economic Forum), the impact of California’s new privacy laws, and dark patterns. Her past work includes projects focusing on social media, genetic privacy, mobile application platforms, the Internet of Things (IoT), and digital surveillance. Her scholarship has been recognized for its impact on policymaking by the Future of Privacy Forum, and she has been an invited speaker before the Federal Trade Commission at several Commission workshops. She has been featured in numerous publications and outlets, including The New York Times, the Washington Post, the Los Angeles Times, Wired, Recode, National Public Radio, CNBC, Bloomberg, CNET, Vox, Consumer Reports, NBC News, MIT Technology Review, among others.

Dr. King completed her doctorate in Information Management and Systems at the University of California, Berkeley School of Information. Prior to joining HAI, Dr. King was the Director of Consumer Privacy at the Center for Internet and Society at Stanford Law school from 2018 to 2020. Before coming to Stanford, she was a co-director of the Center for Technology, Society, and Policy, a graduate student led research center at UC Berkeley, and was a privacy researcher at the Samuelson Law, Technology, and Public Policy Clinic at Berkeley Law. She was a member of the California State Advisory Board on Mobile Privacy Policies and the California State RFID Advisory Board. She received her Master’s in Information Management and Systems also from the University of California, Berkeley’s School of Information, and her undergraduate degree in Political Science and Sociology from the University of California, Irvine. Prior to entering academia she worked in security and in product management for several Internet companies, most notably Yahoo!.

Proxima is a 2017 graduate who works as a data scientist at Salesforce. After trying out various other data hats, she has settled in her current role where she builds machine learning products that help shape the company’s product & sales strategy. When she’s not obsessing over data, Proxima likes to draw & paint patterns her visualization packages won’t allow for. She is married to a fellow MIMS classmate and lives in the Bay Area with their wonderful dog, Sophie.

Shomik is the head of Business Intelligence and Analytics at the Pew Charitable Trusts, where he works to build analytics tools in support of Pew’s mission to improve public policy, inform the public, and invigorate civic life. Prior to Pew, Shomik worked as a data scientist for progressive political campaigns, serving in leadership roles at the Democratic National Committee and Hillary for America. He is a 2016 MIMS graduate and currently lives in Philadelphia.

Felix Morio is a technology attorney and a technical program manager at Microsoft.  Felix maintains a keen interest in technology and software engineering and has worked as a software engineer and product manager in Silicon Valley for over 10 years.  As an attorney at leading law firms Chapman Tripp in New Zealand and A&L Goodbody in Ireland, Felix advised multinational corporations, such as Facebook, Airbnb, Bank of Ireland, and Beca on a broad range of commercial technology matters, including technology outsourcing to Amazon Web Services, data protection and privacy in Europe and New Zealand, core banking SaaS solutions, and SaaS deployment and platform licensing.  At Microsoft, his work bridges the gap between privacy and technology.

Jihong Kim is a venture capitalist at Samsung Ventures and has led both financial and strategic investments in software, digital media, and services. Noteworthy exits include Centrify (acquired by Thoma Bravo), Pluto.tv (acquired by Viacom), BigCommerce (NASDAQ: BIGC), and Loom.ai (acquired by Roblox). He works closely with multiple business units within Samsung in mobile, consumer electronics and enterprise software sectors in order to identify and build strategic partnerships.

Before joining Samsung Ventures, Jihong worked as a research analyst in a global long-short equity hedge fund. Prior to that, he advised enterprise clients in business strategy and execution as a management consultant at PwC. He began his career as a software engineer in Lucent Technologies and also held technical positions at early-stage tech start-ups.

Jihong holds a Bachelor of Science degree in electrical engineering and computer science from UC Berkeley and an MBA from the Haas School of Business at UC Berkeley.

Selenne Berthely is currently working as a project manager for the Central Bank of Mexico, leading a team of engineers to provide data infrastructure and securities management systems that dictate Mexico’s monetary policy.

She earned a BS in Computer Systems Engineering at Universidad La Salle and she is a 2018 graduate from the MIMS program at UC Berkeley, where she explored and delved into the use and applications of data science for the first time. As a student, she became especially interested in blockchain and its applications in the financial markets and worked at the UC Berkeley Fellowships department. She also had the opportunity to work for General Electric Digital as a risk analyst intern and collaborated on setting the first use cases for the startup Flourish.

If you have questions about this event, please contact Tina Kushner. 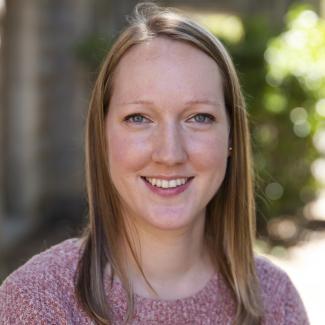