The commencement ceremony honors the class of 2019 with keynote speaker Alex Stamos and student speakers.

The winter ceremony honors School of Information graduates from the summer and fall 2019 semesters.

Jennifer Tour Chayes  will be presiding over her first I School commencement as the new associate provost of the Division of Data Science and Information and dean of the School of Information.

Pre-sale tickets will be available to graduating students only on Friday, November 15 at 10:00 am PST.

Tickets will be available to the general public on Monday, December 2 at 10:00 am PST.

Alex Stamos is a cybersecurity expert, business leader, and entrepreneur working to improve the security and safety of the Internet through his teaching and research at Stanford University. Stamos is an adjunct professor at Stanford’s Freeman-Spogli Institute, a William J. Perry Fellow at the Center for International Security and Cooperation, and a visiting scholar at the Hoover Institution.

Prior to joining Stanford, Alex served as the chief security officer of Facebook. In this role, Stamos led a team of engineers, researchers, investigators, and analysts charged with understanding and mitigating information security risks to the company and safety risks to the 2.5 billion people on Facebook, Instagram, and WhatsApp. During his time at Facebook, he led the company’s investigation into manipulation of the 2016 US election and helped pioneer several successful protections against these new classes of abuse. As a senior executive, Alex represented Facebook and Silicon Valley to regulators, lawmakers, and civil society on six continents, and has served as a bridge between the interests of the Internet policy community and the complicated reality of platforms operating at billion-user scale. In April 2017, he co-authored “Information Operations and Facebook”, a highly cited examination of the influence campaign against the US election, which still stands as the most thorough description of the issue by a major technology company.

Before joining Facebook, Alex was the chief information security officer at Yahoo, rebuilding a storied security team while dealing with multiple assaults by nation-state actors. While at Yahoo, he led the company’s response to the Snowden disclosures by implementing massive cryptographic improvements in his first months. He also represented the company in an open hearing of the US Senate’s Permanent Subcommittee on Investigations.

In 2004, Alex co-founded iSEC Partners, an elite security consultancy known for groundbreaking work in secure software development, embedded and mobile security. As a trusted partner to world’s largest technology firms, Alex coordinated the response to the “Aurora” attacks by the People’s Liberation Army at multiple Silicon Valley firms and led groundbreaking work securing the world’s largest desktop and mobile platforms. During this time, he also served as an expert witness in several notable civil and criminal cases, such as the Google Street View incident and pro bono work for the defendants in Sony vs George Hotz and US vs Aaron Swartz. After the 2010 acquisition of iSEC Partners by NCC Group, Alex formed an experimental R&D division at the combined company, producing five patents.

A noted speaker and writer, he has appeared at the Munich Security Conference, NATO CyCon, Web Summit, DEF CON, CanSecWest and numerous other events. His 2017 keynote at Black Hat was noted for its call for a security industry more representative of the diverse people it serves and the actual risks they face. Throughout his career, Alex has worked toward making security a more representative field and has highlighted the work of diverse technologists as an organizer of the Trustworthy Technology Conference and OURSA.

Alex has been involved with securing the US election system as a contributor to Harvard’s Defending Digital Democracy Project and involved in the academic community as an advisor to Stanford’s Cybersecurity Policy Program and UC Berkeley’s Center for Long-Term Cybersecurity. He is a member of the Aspen Institute’s Cyber Security Task Force, the Bay Area CSO Council, and the Council on Foreign Relations. Alex also serves on the advisory board to NATO’s Collective Cybersecurity Center of Excellence in Tallinn, Estonia.

Stamos worked under Prof. David Patterson while earning a BS in electrical engineering and computer science at UC Berkeley. He lives in the Bay Area with his wife and three children. 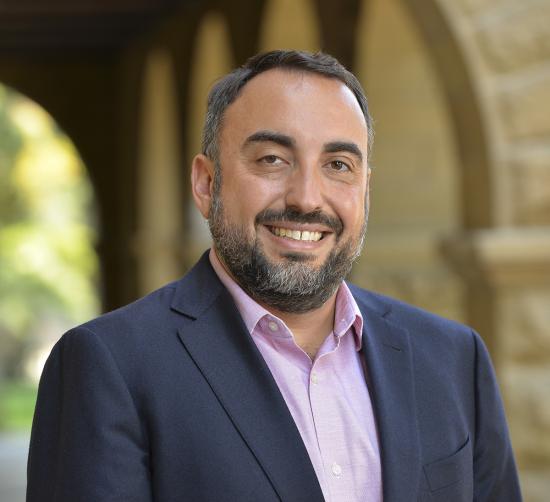