Join us as Ph.D. students from the School of Information share their innovative research with the community.

The Ph.D. program at the School of Information draws doctoral students from a wide array of disciplines whose interests and approaches are as varied as their backgrounds. Though they all take technology as their object of study, our Ph.D. students approach the topic from many different angles — economic, political, social, legal, ethical — in an effort to understand the present impact and future development of information technology.

At the Ph.D. Research Reception, each doctoral student will share their research in a 10-minute presentation, with an additional 3 minutes for questions.

The behavior of a differentially private system is governed by a parameter epsilon which sets a balance between protecting the privacy of individuals and returning accurate results. While a system owner may use a number of heuristics to select epsilon, existing techniques may be unresponsive to the needs of the users whose data is at risk. A promising alternative is to allow users to express their preferences for epsilon. In a system we call epsilon voting, users report the parameter values they want to a chooser mechanism, which aggregates them into a single value. We apply techniques from mechanism design to ask whether such a chooser mechanism can itself be truthful, private, anonymous, and also responsive to users. Without imposing restrictions on user preferences, the only feasible mechanisms belong to a class we call randomized dictatorships with phantoms. This is a restrictive class in which at most one user has any effect on the chosen epsilon. On the other hand, when users exhibit single-peaked preferences, a broader class of mechanisms — ones that generalize the median and other order statistics — becomes possible.

In calls for “privacy by design” (PBD), regulators and privacy scholars have investigated the richness of the concept of “privacy,” while calling for its protection by technical design. However, “design” has received much less attention in the PBD context. In human computer interaction (HCI), design is comprised of rich and complex concepts and practices. From a curated literature review of HCI publications discussing privacy and design, I articulate a set of dimensions along which design relates to privacy, and suggest new roles for HCI and design in PBD research and practice. In particular, I argue for utilizing values- and critically-oriented design approaches to foreground social values and help define privacy problem spaces. Such design approaches, in addition to current “design to solve privacy problems” efforts, are essential to the full realization of PBD.

“Smart city” narratives promise data-driven innovations leveraging biosensing technologies. We argue this overlooks a potential benefit of city living: affirmation. We designed the Heart Sounds Bench, which amplifies the heart sounds of those sitting on it. We outline our design intent to invite rest, refection, and recognition of others’ lives in public space. We share results from a study with 19 participants. Participants expressed feeling connected to a shared life energy including others and the environment. Finally, we elaborate the concept of life-affirmation in terms of recognition of others’ lives, feeling connection, and respecting difference with opacity, as a way of helping “smart city” designs embrace a multiplicity of desires.

This presentation covers a study in which myself and my co-authors investigated how empathy in mediated communication is affected by the type of information available. Our approach was showing a video of a “target” person’s visual perspective watching a virtual reality film to sixty “observers”. We varied information available to observers via three experimental conditions: a baseline unmodified video, video with narrative text, or with a graph of electrodermal activity (EDA) of the target. Compared to baseline, narrative text increased empathic accuracy while EDA had an opposite, negative effect. Qualitatively, observers described their empathic processes as using their own feelings supplemented with the information presented depending on the degree of fidelity they perceived of the information. Interestingly, both narration and EDA prompted observers to reconsider assumptions about another’s experience, even if their empathic accuracy wasn't improved. These findings lead to a discussion of digitally-mediated empathy with implications for future research and the design of communication systems.

In modern music production, professional and amateur composers usually write for instruments they cannot play or do not have the means to record. In practice, they instead sketch these parts into digital interfaces, generating the sounds of the instruments with synthesizers or samplers. These generated parts, however, often lack the dynamics and expressiveness that make for compelling music. In this talk, focusing on the drum set, I will examine how we might be able to generate more realistic and expressive performances using machine learning models and discuss some of the challenges raised by this approach.

With the growing popularity of mobile money in the developing world, and its ability to connect the poor to financial services, the financial inclusion agenda is becoming increasingly digitized. Mobile money now constitutes a type of formal financial access that preserves and further normalizes the assumptions made about ‘formal’ and ‘modern’ financial services and their ability to help the poor. I interrogate these simplistic assumptions of a digitized financial inclusion paradigm in my talk. In general, the mobile money narrative prioritizes its technological innovations and its ability to create and sustain a cashless society while sidelining the broader infrastructure(s) that helps accomplish the challenging task of managing the poor’s unique and precarious cash flows. This narrative also renders invisible the human work that goes into making financial inclusion work for the poor. I challenge these prioritizations and focus instead on the less glamorous aspects of mobile money and how it can help the poor manage their precarity. I also demonstrate the politics of financial inclusion and how misguided policies in its name can fail to accomplish their stated goals, or worse have unintended consequences that actually hurt the poor rather than help them. The 2016 Demonetization event in India provides the ideal research context for this.

Data-driven Development: The Use of Mobile Phone Data and Information to Measure and Reduce Poverty
Robert On

Mobile phone ubiquity in much of the developing world has turned from a question of when rather than if. Some of the poorest and most remote parts of the world are being connected to the global telecommunications network to enable an unprecedented ability to both observe and interact with previously hard-to-reach populations at scale. While many mobile phone owners adopt this technology for basic phone use, the connectedness this expansive ownership enables presents an opportunity to the study and practice of economic development that extend beyond simple peer-to-peer communication.The modern information technology sector and its underlying network infrastructure presented this same opportunity during its own formation. The network was not only valuable for the communication it enabled, but also for the data it produced from those who utilized its services. It also serves as a platform for a deluge of information systems and services that have become a part of our everyday lives and has spurred significant economic growth over the past few decades. This “data revolution” is well underway in the developed economies but is diminishing in its returns, solving increasingly marginal problems. This same transformation is relatively nascent in developing economies where more salient challenges, such as poverty, have yet to be overcome. In this dissertation, we explore a data-driven approach that leverages mobile phone technology to better measure and address poverty in sub-Saharan Africa.

The functionality of the Internet and the Web are determined in large part by the standards that allow for interoperable implementations; as a result, the privacy and security of our online interactions are greatly impacted by the work done within standard-setting organizations, like the Internet Engineering Task Force (IETF) and the World Wide Web Consortium (W3C). We must understand and improve these multistakeholder processes and how they enact privacy and other values to achieve the potential of the Internet. This in-progress work looks at mailing lists, interviews and first-hand experience to explore these questions. Who participates in setting these Internet standards? How do those individuals think about privacy? How does a non-hierarchical, volunteer process affect design decisions? What tools do we have for better support for privacy in the future?

Internal migration is a prominent feature of most developing economies, and a primary driver of economic mobility among poor, rural households. Yet many attempted migrations fail, often leaving the migrant and the migrant’s family more vulnerable than before the attempted migration. Understanding what makes some migrations succeed where others fail — and designing policies that promote effective integration — is thus an important goal for development research and policy. Here, we study these processes using a dataset that contains several years of mobile phone activity from Rwanda’s monopoly operator. These data show how social network structure plays a critical role in the duration and eventual success of a migration in Rwanda. We develop a predictive model of migration success and failure, and show that migration success can be accurately predicted from pre- and post-migration characteristics, including the structure of the migrant’s social network and the spatial trajectories traveled by the migrant.

Virtual High-Schools in an Era of Connection & Inequality
Anne Jonas

Despite regulatory hurdles and troubling achievement patterns, virtual schools continue to grow across the U.S., providing an option for students and teachers who face a number of established challenges in traditional school environments to pursue an education or a career. In this presentation, I draw on preliminary ethnographic research to explore the experiences of stakeholders within virtual schools and their relation to larger patterns of longstanding social inequality.

(Muhammad Raza Khan’s presentation has been rescheduled for a later date.)

Our model uses a dataset of more than 30 million customers, advanced network features and prediction algorithms to model educational gender disparities accurately. Our findings show that call detail records can be effectively used to analyze social networks of men and women in the developing world as an alternative data source to more expensive forms of data collection. Secondly, our analysis shows that men and women in developing countries like Pakistan manifest significant differences in their social network activities and patterns. Lastly, the predictive model that we have developed enables a relatively accurate and cheaper way of estimating gender disparities. Our proposed model can be easily applied to other countries, provided gender-annotated call detail records are present. 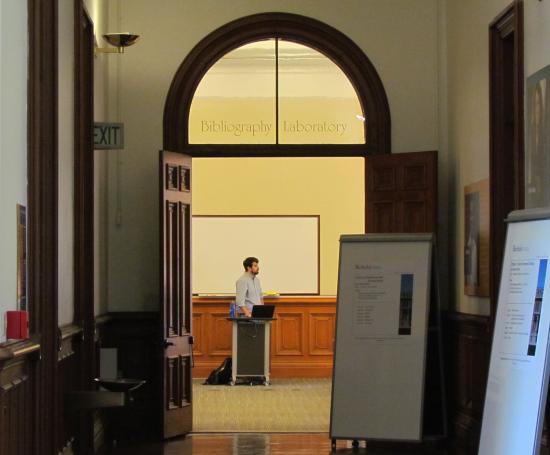