Why Do We Have to Pay People to Work?

Have you ever watched someone deeply engaged in a video game and performing a highly complex but completely artificial task with incredible competence? Could that focus and attention be bottled and used for something serious? We're convinced it can. In the world of collaboration taking place in the online role-playing games, every day (and night) tens of thousands of teams of 5 to 100's of people from multiple time zones, countries and cultures, each with different and highly complementary skills self-assemble around extremely challenging goals. This sounds a lot like the new world of global business collaboration. The psychological principles and affordances found in MMOs have much to teach us about teamwork, leadership, innovation, urgency, and incentives.

To be clear, we are not talking about just using games for training and simulation, although these are wonderful applications. We expect a range of uses that range from borrowing a few of the key psychological ingredients from great games like World of Warcraft that will make the workplace more interesting all the way to the full Monty: re-engineering entire jobs so that workers become their avatars, building transparent and persistent reputations for tackling graded challenges with teammates inside a virtual online world as part of a compelling narrative. If this sounds fantastic, it is worth noting that tens of millions of MMO players are already carrying out tasks inside their games that look exactly like the kinds of information work that companies have to pay people to do!

Because business today is dependent on voluntary creativity and collaboration of workers using their tacit knowledge, ignoring game inspired design principles is a huge missed opportunity. Games offer powerful tools for creating alignment, performance and engagement. And like any powerful technology, they can be dangerous if the implications for stakeholders aren't thoughtfully considered.

J. Leighton Read, M.D., is a general partner in four Alloy Ventures funds from 2001-2007 and a successful entrepreneur and CEO. His companies have created outstanding financial returns by delivering extreme innovation to solve needs in discovery of new medicines, life science research and public health. For over two decades, he has also been interested in the psychological principles that underlie successful electronic games and is currently devoting substantial time to his role as executive chairman of Seriosity.  The Harvard Business Press recently published his book with Byron Reeves, Total Engagement:  Using Games and Virtual Worlds to Change the Way People Work and Businesses Compete.

Alloy Ventures in Palo Alto, California is an early-stage venture fund with over $1 billion under management. Before joining the firm in 2001, Leighton spent 14 years as a biotechnology entrepreneur and investor. He co-founded Affymax NV, under the direction of Dr. Alejandro Zaffaroni, setting the stage for two successful spin-outs: Affymetrix and Maxygen. He founded Aviron, a biotechnology company best known as the developer of FluMist™, the intranasal influenza vaccine, where he served as chairman and CEO until 1999 and director until its acquisition by MedImmune in 2002. While at Alloy, he funded a spin-out of Maxygen and served as the first CEO of Avidia, Inc, later acquired by Amgen.

Leighton received a B.S. from Rice University in Psychology and Biology (1973), an M.D. from the University of Texas Health Science Center at San Antonio (1976) and completed internal medicine training at Duke and the Peter Bent Brigham Hospital in Boston where he held appointments at the Harvard Medical School and School of Public Health. His published research dealt with applications of decision theory in medicine, cost-effectiveness analysis and policy regarding medical innovation. Based on a long-standing interest in computer-aided decision-making, he produced a successful interactive PC game in 1984 to promote healthy lifestyles based on text-based adventure games and behavior modification principles. He is a director of a number of young companies in the fields of biotechnology, medical devices, nanotechnology, cleantech and software. He also serves as a trustee or director of The BeneTech Initiative, BioVentures for Global Health, The UC Berkeley Foundation and School of Public Health Council and the Santa Fe Institute. His awards include several as co-inventor of technology underlying the Affymetrix GeneChip™ and Ernst & Young's California Life Science Entrepreneur of the Year. 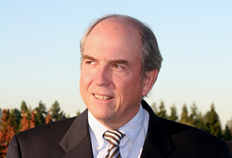