Is the Web a Threat to Our Culture?

When Time Magazine named “YOU” as their 2006 Person of the Year, it highlighted what has been deemed the democratization of the media. The term “Web 2.0” was coined to describe this transformation on the internet, where individual volunteers, not institutions, control its content. But many people share doubts about the hype around Web 2.0 and have different ideas about what's significant, what's trivial, and what's irrelevant. Protagonists, such as Andrew Keen, believe that it is not only significant, but is significant enough to threaten “our economy, our culture, and our values.”

Andrew Keen is a Silicon Valley author, broadcaster and entrepreneur whose provocative book Cult of the Amateur: How the Internet is killing our culture was recently acclaimed by The New York Times’ Michiko Kakutani as “shrewdly argued” and written “with acuity and passion”. Andrew is a prominent media personality who has appeared on the “Colbert Report”, “McNeil-Lehrer Newsnight” show, “The Today Show”, “Fox News”, “CNN International”, “NPR’s Weekend Edition”, “BBC Newsnight” and many other television and radio shows in America and overseas. He has written for The Los Angeles Times, the Wall Street Journal, the London Guardian, The San Francisco Chronicle, Forbes, The Weekly Standard, Fast Company and Entertainment Weekly and has been featured in numerous publications including Time Magazine, The New York Times, US News and World Report, BusinessWeek, Wired, the Financial Times, the Wall Street Journal, the Sunday Times, the Independent and MSNBC. Andrew is also a pioneering Silicon Valley media entrepreneur, having founded Audiocafe.com in 1995 and built it into a well known first generation Internet music company. Educated at the universities of London and California, Andrew now lives in Berkeley, California with his wife and two children.

Paul Duguid is an adjunct professor at the UC Berkeley School of Information; a professorial research fellow at Queen Mary, University of London; and an honorary fellow of the Institute for Entrepreneurship and Enterprise Development at Lancaster University School of Management. At Berkeley, he co-teaches the "Quality of Information" and the "History of Information", and his current research interests include the history and development of trademarks and a three-year archival research project funded by the ESRC of the UK and administered through Queen Mary, University of London. Throughout the 1990’s, he worked at the Xerox Palo Alto Research Center, and his book The Social Life of Information, co-written with John Seely Brown, is a reflection on the digital bombast of that era.

Geoffrey Nunberg (moderator) is an adjunct professor at the UC Berkeley School of Information; a researcher at the Center for the Study of Language and Information at Stanford University; and a consulting professor in the Stanford Department of Linguistics. He serves as chair of the usage panel of the American Heritage Dictionary, contributes a feature on language on the NPR show "Fresh Air", and has written numerous commentaries on language for the Sunday New York Times Week in Review and other periodicals. His linguistics research includes work in semantics, pragmatics, text classification, and written-language structure; he also studies the social and cultural implications of digital technologies. 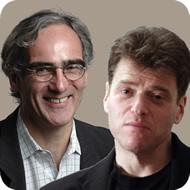